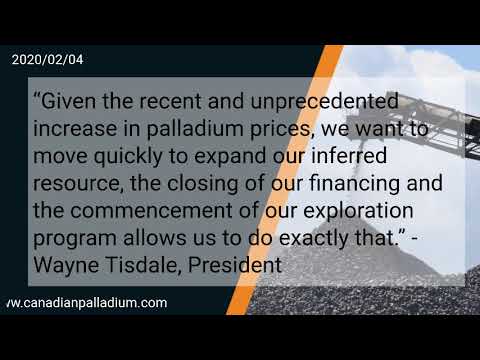 The palladium market continues to rocket higher as a severe structural palladium deficit continues due to strong demand and restrained new supply.

Palladium is currently priced at USD $2,442 and is showing no signs of falling, as tightening emissions standards in Europe and China in 2020 have meant demand is increasing.

Palladium is a key ingredient in vehicle catalytic converters which account for over 75% of palladium demand. Palladium in catalytic converters is not easily replaced and compared to the overall car cost the price rise can be tolerated by car companies, at least for now. Other uses for palladium include electronics, dentistry, medicine, chemical applications and jewelry (white gold).

The East Bull Palladium Project is situated on the 992 hectare East Bull property. It has a 43-101 compliant inferred resource estimate of 1.1 million tonnes of ore at a grade of 1.46g/t Pd Eq for a total of 523,000 ounces palladium (Pd) Equivalent (Eq), with significant upside potential.

The Project has been drilled over an 1.8 km strike length to a maximum depth of 120 m; however, the mineralized zone is 3.6 km in length and open at depth. This suggests the final resource is potentially ~4x the current resource (assumes it continues to a depth of 240 m) for about 2 million oz of palladium equivalent.

After a recent successful capital raising the Company is fully funded for a new 10,000 m drilling program set to start soon. The purpose is to test the full strike length and expand upon the inferred resource.

The Project also has good logistics and infrastructure.

Based on the mineralization the potential resource is 4x larger

New Age Metals Inc. (TSXV: NAM | OTCQB: NMTLF) is a mineral exploration company focused on the exploration and development of platinum group metals (includes palladium and platinum) and lithium. The Company’s flagship is their 100% owned River Valley PGM Project in Canada. They also have options to purchase and JV into several lithium projects, and the Genesis PGM/Base Metals Project.

The River Valley Project (flagship) is located in the Sudbury region of Northern Ontario. Overall, the River Valley PGM deposit is 16 km+ of mineralized deposit. The Company state that their project is Canada’s largest primary platinum group metals deposit.

A recent Preliminary Economic Assessment (PEA) resulted in an after tax NPV5% of $138 million, an after tax IRR of 10%, over a 14 year mine life. The initial CapEx was estimated at C$495 million. The key here is that if the mine life can be extended to 20 years then the NPV would improve significantly. Also the above was based on a palladium price of only US$1,200/oz Pd, compared to today’s price of US$2,442; and a gold price of US$1,350 compared to today’s price of US$1,562. According to the Company if the PEA used a base price of US$2,090/oz Pd, then the after-tax IRR would rise significantly to 27%.

Investors should consider both Canadian Palladium and New Age Metals as a way of gaining early stage exposure to the palladium sector. Naturally, the early stage means risk is higher, but both companies already have good initial resources and are located in the safe jurisdiction of Canada.

It looks clear for now that the precious PGMs and gold will continue to be in strong demand in future years. This is a great opportunity here for patient investors wanting cheap early to mid-stage exploration exposure to the precious metals.