September 7 (Source) — AZINCOURT ENERGY CORP. (“Azincourt” or the “Company”) (TSX.V: AAZ, OTC: AZURF), is pleased to report the completion of the airborne radiometric survey and provide an update on preparations for the upcoming 2021-2022 drill program at the East Preston uranium project, located in the western Athabasca Basin, Saskatchewan, Canada.

The primary target area for the 2021-2022 program continues to be the conductive corridor from the A-Zone through to the G-Zone (Figures 1 and 2). The selection of this trend is based on a compilation of results from the 2018 through 2020 ground-based EM and gravity surveys, property wide VTEM and magnetic surveys, and the 2019 through 2021 drill programs. The 2020 HLEM survey completed in December indicates multiple prospective conductors and structural complexity along the eastern edge of this corridor.

Terralogic Exploration Inc. was contracted to facilitate an airborne radiometric survey over the previously unsurveyed southern portion of the property and conduct field investigations of resulting anomalies. Special Project Inc. (SPI) of Calgary, Alberta conducted the survey using a fixed wing aircraft to complete the airborne radiometric survey, which consisted of 2,514 km of survey lines flown at a low minimum altitude and 50 m line spacing to ensure good data collection and a high survey resolution. The survey commenced on August 4th and was completed by August 14th. Preliminary results have been received (Figure 3) and ground-based follow-up of identified anomalies is currently underway.

An airborne radiometric survey uses a gamma ray scintillometer mounted on an airborne platform to measure and map the natural radiation emitted by the rocks and soil the aircraft is flying over. Gamma radiation occurs from the natural decay of elements such as uranium, thorium, and potassium. Locations that have a higher radiation signature (anomalies) than the normal values for the surrounding area (background) would then be examined by crews on the ground for the potential presence of radioactive bedrock if there is not much glacial till cover, or boulders in the till that could be traced back to a source. Many uranium deposits in the Athabasca Basin, including the nearby Triple-R deposit, have been found by following trails of radioactive boulders in the glacial till back to their source.

“The radiometric survey coverage has further highlighted the G-zone and the Q-zone to the east, reinforcing our decision to focus on these conductive packages at this stage of the project. I’m eager to see what boots on the ground may yet show based on these results,” said VP, Exploration, Trevor Perkins.

The planned early fall diamond drilling program to complete approximately 1,000 meters of drilling remaining from the shortened winter 2021 program has been rescheduled after consultation with local communities and contractors. As a result, this meterage will be used to further expand the upcoming extensive winter drill program. This program will now consist of approximately 7,000 meters in 30-35 drill holes. Preparations are set to begin in early December. Target selection is ongoing and will be refined based on the ground-based follow-up of anomalies identified from the recently completed airborne survey.

“We don’t want our activities to negatively impact traditional activities by members of the local communities in the area at this critical time of year. There are number of concerns, including the impact of this summer’s heightened fire conditions on the environment,” said VP Exploration, Trevor Perkins. “In consideration of this, we made the decision in consultation with the community to push the scheduled 1000 meters out 90 days into an expanded winter program, which is due to commence in December. We are looking forward to the upcoming drill campaign,” continued Mr. Perkins.

“The radiometric survey has successfully increased our potential target inventory at East Preston,” said Alex Klenman, President and CEO. “In addition, in a matter of weeks we’ll be starting the largest drill campaign yet at East Preston. We are heading towards discovery, with all previous work programs contributing critical data and creating what is now a very compelling exploration case. With renewed life in the sector, our timing appears to be really good. The next couple of years could be very exciting for both the Company and our shareholders,” continued Mr. Klenman.

Permits and funding are in place to complete all the planned work through the winter of 2022, and consultations and information sessions with local communities will continue throughout.

Azincourt controls a majority 70% interest in the 25,000+ hectare East Preston project as part of a joint venture agreement with Skyharbour Resources (TSX.V: SYH), and Dixie Gold. Three prospective conductive, low magnetic signature corridors have been discovered on the property. The three distinct corridors have a total strike length of over 25 km, each with multiple EM conductor trends identified. Ground prospecting and sampling work completed to date has identified outcrop, soil, biogeochemical and radon anomalies, which are key pathfinder elements for unconformity uranium deposit discovery. 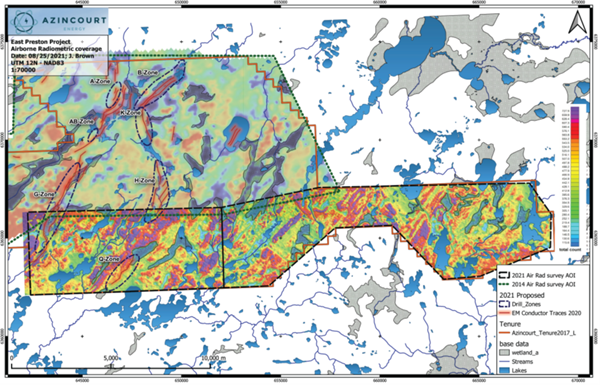 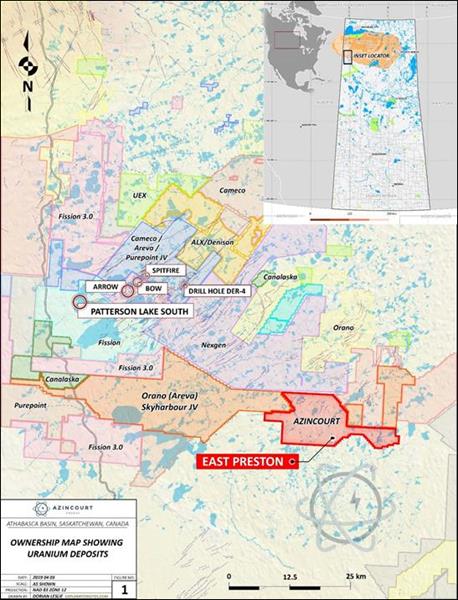