June 30, 2014 (Source: Accesswire) — CanAlaska Uranium Ltd. (TSX-V – CVV) (“CanAlaska” or the “Company”) is pleased to announce that it has completed the sale of the Kasmere South uranium project in Northern Manitoba to East Resource for a cash payment of $1.8M and a 2.5% net smelter royalty. The royalty has a CDN$20,000,000 one-time pre-production purchase option. 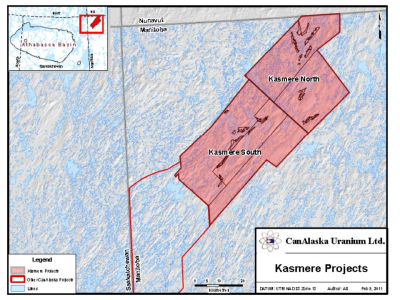 The cash payment significantly strengthens CanAlaska and assists with the Company’s plan to concentrate on more rapid exploration of its core Japanese and Korean joint ventures at West MacArthur and Cree East, within the Athabasca basin. CanAlaska retains the large Kasmere North project, adjacent to the northeast, (see map) as well as its interest in the NW Manitoba Project, and eleven other uranium projects in the Athabasca Basin in Saskatchewan..

There are active exploration programs on the Company’s Patterson Lake Properties by Makena Resources and the NW Manitoba property which is under option to Northern Uranium Corp. There has been significant preparation field work carried out in the past months, on each optioned property. Currently there are two drills on the NW Manitoba property awaiting the commencement of the summer drill season. The NW Manitoba targets are detailed in Northern Uranium news http://www.northernuranium.com/news/mpvc-receives-final-radonex-results/

The Company is now fully funded for its basic operations for the next 2 years. The Company has concluded the sale of its Reefton Gold project to a private New Zealand company, and will continue the marketing of its non-core uranium, copper and diamond properties located in the Athabasca, Northern Manitoba, British Columbia and Alaska.

The Company`s focus will be the funding of the exploration of its core uranium projects of Cree East and West McArthur in the Athabasca Basin, operated in conjunction with its international Korean and Japanese partners.

The Company has granted incentive stock options to directors, officers and consultants to purchase an aggregate of 573,750 common shares in its capital at $0.18 per share for a two year period.

The qualified technical person for this news release is Peter Dasler, P. Geo.

CANALASKA URANIUM LTD. (CVV – TSX-V, CVVUF — OTCBB, DH7F — Frankfurt) has undertaken uranium exploration on multiple uranium projects in Canada’s Athabasca Basin — the “Saudi Arabia of Uranium” since 2005. The Company has major international partners for its West McArthur and Cree East properties, and is concentrating its activities on these advanced projects.

The TSX-V has not reviewed and does not accept responsibility for the adequacy or accuracy of this release: CUSIP# 13708P 10 2. This news release may contain certain “Forward-Looking Statements” within the meaning of Section 21E of the United States Securities Exchange Act of 1934, as amended. All statements, other than statements of historical fact, included herein are forward-looking statements that involve various risks and uncertainties. There can be no assurance that such statements will prove to be accurate, and actual results and future events could differ materially from those anticipated in such statements. Important factors that could cause actual results to differ materially from the Company’s expectations are disclosed in the Company’s documents filed from time to time with the British Columbia Securities Commission and the United States Securities & Exchange Commission.

October 25, 2021 (Source) — NOT FOR DISTRIBUTION TO U.S. NEWS WIRE SERVICES OR DISSEMINATION IN THE UNITED STATES. Neo Performance […]

InvestorChannel’s Cancer Treatment Stocks Watchlist Update video includes the Top 5 Performers of the Day, and a performance review of […]

InvestorChannel’s Cancer Diagnostics Stocks Watchlist Update video includes the Top 5 Performers of the Day, and a performance review of […]