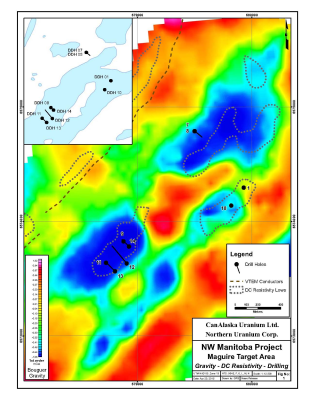 Northern Uranium’s winter drill program at Maguire Lake confirmed the discovery in its latest drill results. The hydrothermal system has multiple structures over a 100 metre width and has been defined so far over a 300 metre strike length. It is characterized by intense clay-hematite alteration. Drill hole MG15DD-0014 confirms the alteration discovery when it intersected a horizontal width of about 50 metres hosting a series of radioactive spikes reaching about five times background. A second hole, MG15DD-0015, was stopped while still in overburden due to deteriorating ice conditions.

A summer drill program is anticipated to commence in early June – with two diamond drills – to test multiple targets: there are seven land targets to be tested. These anomalies are based on the results of ground gravity, ground IP/resistivity surveys, airborne electromagnetic surveys, RadonEx radon in water surveys and AlphaTrack radon on land surveys. All of these targets are up-ice of uraniferous boulders (up to 66% U3O8) discovered by CanAlaska geologists in a prospecting program.

The recently completed exploration program also included the completion of a ground gravity survey and an infill RadonEx radon-in-water survey over the Maguire Lake target area.

Drill hole MG15DD-0014 is located 120 metres along strike to the northeast from mineralized hole MG15DD-0012 (reported on April 22, 2015) and targeted the center of the gravity low, a conductivity anomaly at 100 metres depth and anomalous RadonEx radon-in-water results. This anomaly was previously tested by vertical hole MG15DD-0009.

RadonEx Exploration Management has now completed an infill radon in water survey over portions of Maguire Lake and a separate survey over a portion of Snyder Lake, which is located approximately 12 kilometers along strike to the northeast of the Company’s focus area at Maguire Lake.

A total of 253 radon in water samples were collected at Maguire Lake. The results confirm and expand the existing anomalies. At Snyder Lake 234 radon in water samples were collected on a coarse grid covering a 2 by 3 km area. Of the 234 samples, six samples had results greater than 100 pCi/L with a highest reading of 327 pCi/L. These results demonstrate that uranium mineralization appears to extend along a significant strike length along the Maguire Structural Trend.

Northern Uranium has contracted Initial Exploration Inc. to expand the ground gravity grid at Maguire Lake. The field collection of the data is now complete and it is presently being compiled. This work will almost double the coverage area from around 18 km2 to over 30 km2. The newly expanded coverage has now fully defined several pronounced gravity lows which were at the margin of the previous survey. These gravity lows could reflect the alteration zones associated with unconformity style uranium mineralization.

President Peter Dasler commented “Northern Uranium has now established that the Maguire drill targets are substantial in size and intensity of alteration. Indications of uranium are now being seen in multiple drill holes, the intense zones of clay-hematite alteration within the geophysical targets are providing a strong vector to additional and potentially more massive uranium mineralization. We are eagerly awaiting the start of an intense drill program, utilizing two diamond drills in early June.”

Dr Karl Schimann, PGeo, a qualified person under National Instrument 43-101, is responsible for the technical content of this release.

The TSX-V has not reviewed and does not accept responsibility for the adequacy or accuracy of this release: CUSIP# 13708P 10 2.