May 18, 2022 (Source) – Appia Rare Earths & Uranium Corp. (CSE: API) (OTCQB: APAAF) (FSE: A010) (FSE: A0I.F) (FSE: A0I.MU) (FSE: A0I.BE) (the “Company” or “Appia”) is pleased to provide an update on the Company’s 2022 drilling program at Alces Lake. As previously announced, the winterized camp was opened in early March and drilling has been underway since mid-March. A second drill became operational on May 4 and both drills are operating 24 hours a day.

The Augier discovery was made in 2021 and was channel sampled. The assay results returned 7 metres of 0.57wt% TREO. This discovery is approximately 1,500 metres directly southeast of the WRCB area and is along a well-defined kilometres-scale structural corridor.

The very first hole drilled into the discovery in 2022 intersected an encouraging 51.2m of anomalous radioactivity beginning at the top of hole. The drilled width of this near-surface anomaly is unprecedented when compared to previous drilling campaigns at Alces Lake. The core has been sampled and submitted for assay. The second hole 22-AUG-002 undercut 22-AUG-001 and confirmed the result, also intersecting 70.1 metres of anomalous radioactivity from the top of the hole. The third hole at 22-AUG-003 explored the strike extent of this trend and intersected 58 metres, starting at a depth of 23 metres. This is the same anomalous radioactive unit as the two previous holes and is on strike 150 metres southeast of 22-AUG-002.

Continued Delineation of the WRCB Discovery

Appia continues to delineate the magnitude of the rare earth elements discovery at WRCB with longer and deeper holes to build on the 2021 information. The results so far are encouraging.

Additional 2022 exploration activities at WRCB will include an IP survey over the centre of the WRCB discovery area to evaluate the methods applicable across the property. 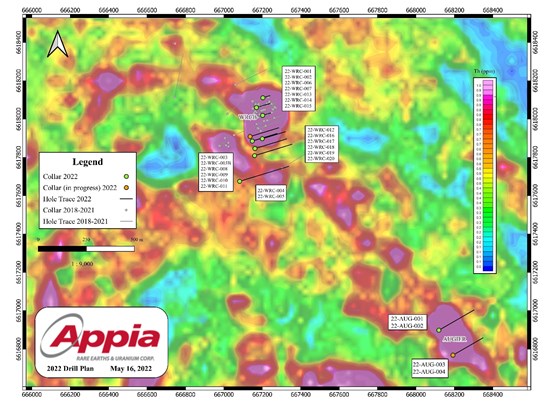 The Company has now received all 2021 assay results and is currently analyzing and evaluating the information. A summary of the results is expected to be released in the near future. As recently announced, a 900 kg sample has been taken from the property and 600 kg is enroute to SGS Canada’s Lakefield facility in Ontario for crushing and sizing ahead of test work. The remainder of the sample will be shipped at a later date. Upon completion of the preparatory work, the sample will be shipped to CanmetMINING and the test programs will begin to optimize and enhance the development of an Alces Lake Project flowsheet. In addition, Appia has requested proposals for additional airborne and ground radiometric surveys.

Appia commenced drilling at Alces Lake in mid-March 2022 and plans to drill significantly deeper holes compared to the 100 holes (approximately 8,076 metres) drilled in 2021. This is designed to allow Appia to determine continuity at depth and along the identified REE mineralization trends as the company works towards a maiden resource estimate in accordance with NI 43-101 for the area. With high-grade REE mineralization now identified in many locations within an area covering approximately 27 km2 of the Alces Lake block. the Company believes the project has the potential to be a world-class source of high-grade critical rare earth bearing monazite.

The Alces Lake project is located in northern Saskatchewan, the province that is developing a “first-of-its-kind” rare earth processing facility in Canada (currently under construction by the Saskatchewan Research Council and scheduled to become operational in early 2023). The Alces Lake project area is 35,682 hectares (88,173 acres) in size and is 100% owned by Appia.