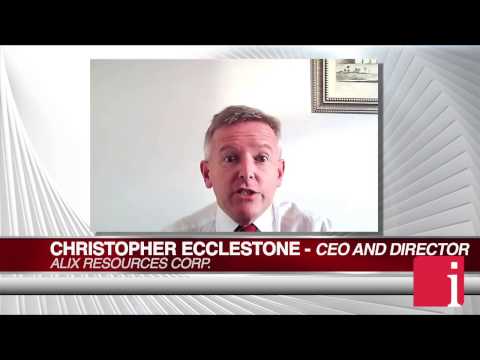 Ecclestone on Alix Resources and the value-added chain of lithium

Christopher Ecclestone in an interview with InvestorIntel Corp. Sr. Editor Fred Cowans discuss his recent appointment CEO and Director for Alix Resources Corp. (TSXV: AIX). Discussing the ongoing mandate of Alix as a project generator and developing a presence in the value-added chain of lithium, he comments: “….people think of that as being involved in the process of making the batteries. In fact, we want to go beyond that. We want to get involved in the space after the batteries are exhausted and start working with the recycling of lithium batteries because it’s not just the lithium itself that’s in these batteries.”

Fred Cowans: You’ve recently been appointed the Chief Executive Officer of Alix. I think you were on the advisory board for some time so you know the story well. What’s going to be your focus coming into the CEO chair?

Christopher Ecclestone: As a project generator we can run far and wide in looking for projects to develop and that’s what we’re doing. We’ve got some projects already, some more advanced than others. We’re going to be looking to add some more on and then thinking about the ways that we can generate some value from them in the future.

Christopher Ecclestone: Well, our first property of note is the Mexican property, which joins both the north and the south ends, the Sonora Project of Bacanora, which has attracted a lot of interest because they announced that they had a deal potentially for the offtake from that to Tesla. That’s made the area a bit hot. We’ve got fortunately the extensions, both the north and the south of that.  We’re developing that with an ASX listed company called Lithium Australia, which is also known to the InvestorIntel audience. They are paying to earn in on that property. That’s our main prospect at the moment. Our wholly owned properties consist of several in Quebec, one in Ontario and then there’s another property farther west that we haven’t done any work on at the moment. It’s interesting because it’s not just lithium, but it’s a number of other minerals as well that we picked up from— that had previously worked on by TANCO, which is a well-known company in the tantalum space.

Fred Cowans: Beyond exploration, does the company have plans to do other things with lithium?

Christopher Ecclestone: We would wish to develop a presence in the value-added chain of lithium. Interesting, people think of that as being involved in the process of making the batteries. In fact, we want to go beyond that. We want to get involved in the space after the batteries are exhausted and start working with the recycling of lithium batteries because it’s not just the lithium itself that’s in these batteries, but we also have that other obscure object of desire of the recent times, cobalt, which as a conflict mineral— In fact, one of the few non-conflict sources of cobalt will actually be recycling batteries.

Fred Cowans: That’s very exciting. What should investors be looking for in the way of news flow on that subject?

Christopher Ecclestone: Well, we’re going to be announcing that we’re moving into this space with a very well-known operator in the specialty metals area. They will be helping us in moving forward and really move to a demonstration plant in the short-term because we do not want to spend a long time on this because I believe in many of these specialty metals the advantage goes to the first mover. We want to be a first mover in lithium recycling….to access the complete interview, click here

Disclaimer: Alix Resources Corp. is an advertorial member of InvestorIntel.