“Our 2013 drilling program significantly expanded the indicated resource at Whitetail – particularly our resource of contained HREs,” stated Dr. James G. Clark, Vice President of Exploration. “Bear Lodge is a world-class rare earth district with multiple rare earth ore zones created by different geological events.  The higher concentrations of HREs found at the Whitetail deposit and other exploration targets, like Carbon and Taylor, make them excellent complements to the Bull Hill deposit.  Because HREs are usually higher priced and projected to have better supply and demand fundamentals, these peripheral targets provide real upside opportunity and will help ensure the Company’s premier place in the world’s rare earth supply chain.”

The 2013 Whitetail development drill program consisted of approximately 11,700 feet of HQ-sized core drilling in 14 holes focused on the northeast portion of the mineralized area.  The program’s objective was to upgrade a large block of Inferred oxide resource into the Indicated resource category and to further delineate zones of HRE enrichment.

Estimated Project-wide Measured and Indicated Resource at Various Cutoff Grades
(In millions, except were noted)

Resources were estimated for the Whitetail deposit using inverse-distance-weighting with grade zones to differentiate between high-grade and stockwork mineralization. High-grade mineralization was defined as a minimum 20 feet (6.1m) true width above 1.5%. Slightly different cutoff grades and minimum widths were used in other areas. Drill holes were composited to nominal 10-foot (3.05m) true-width intervals for estimation. Grades were not capped, but oxide and oxide-carbonate grades were adjusted downward for estimation of the transition and sulfide zones to compensate for the significant increase in grade in the oxidized zones. Grades were estimated using trend surfaces to interpolate parallel to the carbonatite/FMR dike orientation. The resource model blocks are 10 X 10 X 10-foot cubes. Based on 4-year average REO prices, the cutoff grade of 1.5% REO was selected near the high-point of a range of likely cost scenarios. As additional data are gathered, work will continue on the resource estimates with further evaluation and refinement.

Discovery of high-grade HRE mineralization at the Whitetail Ridge deposit, and at the Taylor and Carbon target areas, allowed the Company to expand the area of known rare earth mineralization well beyond the Bull Hill deposit and identify a “district” underlain by significant rare earth mineralization. As currently understood, the Bear Lodge District covers a crudely elliptical area that extends approximately 5,740 feet (1,750m) northwest-southeast by 4,260 feet (1,300m) northeast-southwest.  Geochemical and geophysical work has identified several additional targets areas nearby for further exploration. 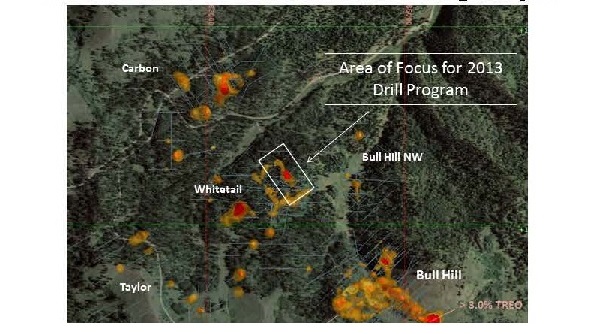 Work done to date identifies a general zonation of rare earth distribution in the Bear Lodge district.  The Whitetail resource area and Carbon target are located northwest of the Bull Hill deposit, and the Taylor target is located west of the Bull Hill deposit.  The three western mineralized zones are characterized by some of the highest grades of Eu, Tb, Dy, and Y in any North American rare earth deposit and also contain high abundances of the light rare earths (LREs; La-Sm), which includes the Critical Rare Earths (CRE) Neodymium (Nd) and Praseodymium (Pr).  The total HRE abundances at the Whitetail Ridge resource, and at the Taylor and Carbon targets, are two to four times higher than those found at the Bull Hill deposit. 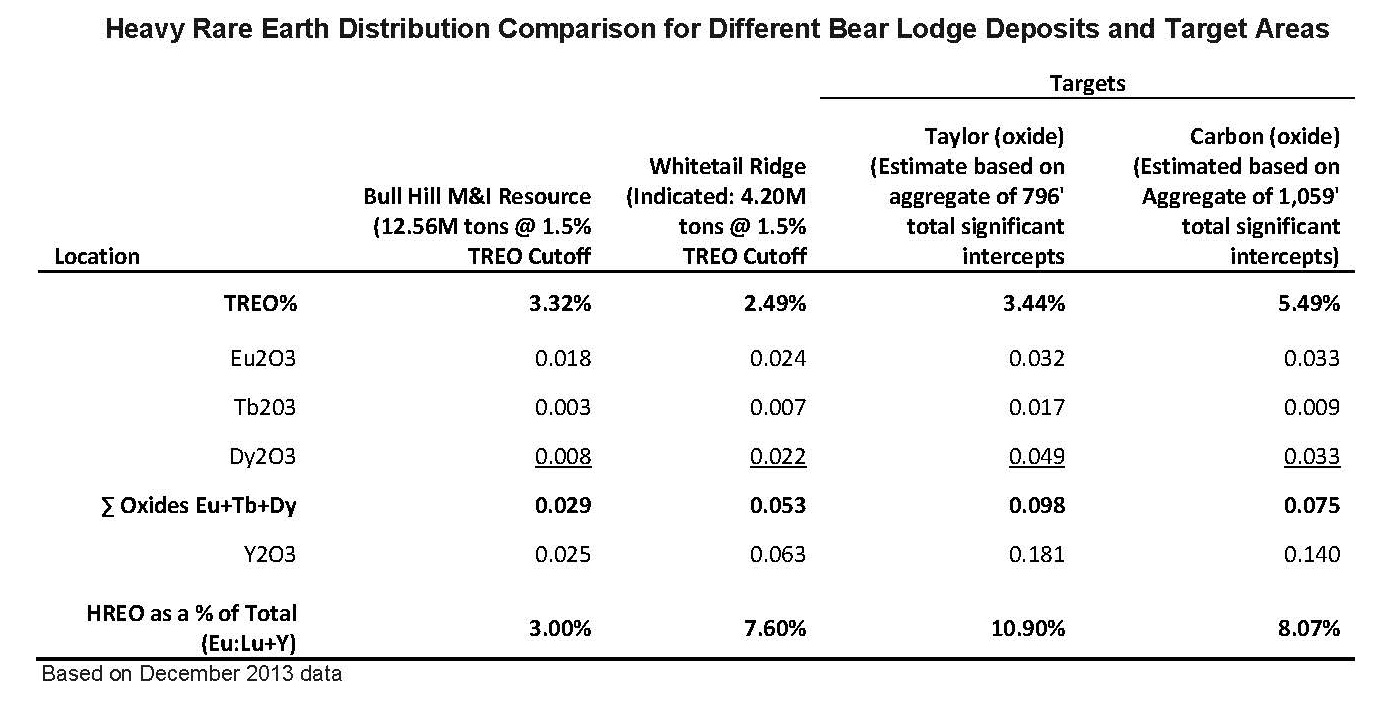 The Importance of Critical and Heavy Rare Earths

The unique characteristics of rare earths allow them to be used in a variety of applications and results in a unique supply and demand fundamental for each element.  CREs were identified in a 2011 study by the US Department of Energy (DOE) entitled, “Critical Material Strategy.”  The study reviewed rare earths based on their role in clean energy juxtaposed against their supply risk and stressed the importance of developing sources for CREs outside of China. The study identified as “critical” the HREs of Eu, Tb, Dy and Y, and the LRE Nd. The Company includes Pr in this list because it can substitute for Nd in light weight, high-intensity permanent magnets, one of the major uses in green, medical and telecommunication technologies.

While they usually occur all together in mineralized areas, the concentration of each rare earth element varies significantly from deposit to deposit.  Based on pricing from the Metals Pages as of December 3, 2013 and using the mineralized makeup reflecting the new project-wide resource at Bear Lodge, over 85 percent of the projected revenues are expected to come from CREs.

For a complete list of the significant assays by individual drill hole as well as the values of the Eu, Tb, Dy and Y found in each intercept, please visit the Company’s website at www.rareelementresources.com and go to the Bear Lodge Project Geology and Mineralization page.

The 2013 drill program was extended in mid-August in order to examine the grade distribution in the high-grade zone at the Bull Hill deposit. The program was suspended in mid-October due to severe weather conditions. Approximately 90% of the drilling was completed, with 10,651 feet drilled in 21 PQ-diameter drill holes.  Assays are pending, with all assays expected by late December 2013. The resulting data will be incorporated into the evaluation of a development option that mines this high-grade core first to improve early Project cash flows.

For the 2013 drill hole assays, analytical quality is monitored through the use of randomly inserted quality control samples, including standards, blanks, and duplicates, which are blinded to the analytical laboratory. Results from the analyses at ActLabs are evaluated continuously by Dr. Jeffrey Jaacks, the Company’s QA/QC consultant, who is a Qualified Person according to National Instrument 43-101. The results from the current data set of 2013 drill hole assays indicate acceptable accuracy and precision.

Rare Element Resources Ltd. is a publicly traded mineral resource company focused on exploration and development of rare-earth element deposits, specifically those with significant distribution of critical rare earths.  The Company is advancing development of the Bear Lodge Project, located in northeast Wyoming.  Bear Lodge is a significant mineralized district containing many of the less common, more valuable critical rare earths that are essential for electronics, fiber optics, laser systems for health and defense, as well as many evolving green technologies, like hybrid cars, solar panels and wind turbines.  Permitting and feasibility work on the Project is currently underway.

John T. Ray, MS, Rare Element’s internal, qualified person under Canadian NI 43-101, supervised the preparation of the scientific and technical information concerning the Company’s mineral project contained in this news release. For a description of the key assumptions, parameters and methods used to estimate mineral reserves and resources, as well as data verification procedures and a general discussion of the extent to which the estimates may be affected by any known environmental, permitting, legal, title, taxation, socio-political, marketing or other relevant factors, please see the Technical Reports for our project as filed on SEDAR at www.sedar.com.

Forward-Looking Statements
This news release contains forward-looking statements within the meaning of securities legislation in the United States and Canada. Except for statements of historical fact, certain information contained herein constitutes forward-looking statements. Forward-looking statements are usually identified by our use of certain terminology, including “will”, “believes”, “may”, “expects”, “should”, “seeks”, “anticipates”, “plans”, “has potential to”, or “intends” or by discussions of strategy or intentions. Such forward-looking statements include statements regarding the processing test work and expected results, permitting process and progress, and project development plans for the future. Such forward-looking statements involve known and unknown risks, uncertainties and other factors which may cause our actual results or achievements to be materially different from any future results or achievements expressed or implied by such forward-looking statements. Factors that could cause actual results to differ materially include, but are not limited to, the progress of our Bear Lodge Project, fluctuations in demand for, and price of, rare earth products; success of process technology under testing; timing of and unexpected events at the Bear Lodge property; delay or failure to receive government approvals and permits; changes in U.S. and Canadian securities markets; and general economic conditions. There can be no assurance that future developments affecting the Company will be those anticipated by management. Please refer to the discussion of these and other factors set out in our filings made from time to time with the SEC and Canadian security regulators, including but without limitation, our reports on Form 10-K and Form 10-Q. We expect that the above estimates as to development plans, technology and other processes, time frames and financial needs will change as new information is received and that actual results will vary from these estimates, possibly by material amounts. While we may elect to update these estimates at any time, we do not undertake to update any estimate at any particular time or in response to any particular event. Investors and others should not assume that any forecasts in this press release represent management’s estimate as of any date other than the date of this press release.

Cautionary Note to U.S. Investors
The United States Securities and Exchange Commission permits U.S. mining companies, in their filings with the SEC, to disclose only those mineral deposits that a company can economically and legally extract or produce. We may use certain terms in public disclosures, such as “measured,” “indicated,” “inferred” and “resources,” that are recognized and required by Canadian regulations, but that SEC guidelines generally prohibit U.S. registered companies from including in their filings with the SEC. U.S. investors are urged to consider closely the disclosure in our Form 10-K which may be secured from us, or from the SEC’s website at http://www.sec.gov

Why are uranium stocks booming?

Uranium stocks have been rising since November 2020 and are now very clearly in a strong bull run. We asked […]