Pancon President and CEO Layton Croft stated: “The St. Laurent Project strengthens Pancon’s strategy of exploring for essential battery and energy metals in low-risk jurisdictions near operating and former mines. It also brings a 5th project to Pancon’s exploration portfolio in Northern Ontario, where we value our positive social license to operate. Past shallow drilling at our St. Laurent Project identified disseminated multi-element sulphide mineralization across notable widths trending towards a large gabbro-hosted magnetic feature. The Ni-Cu-Co-Au-Pt-Pd zone is open along strike and at depth. This mineralized zone, importantly, is coincident with a strong 600-metre long EM anomaly. Drilling to date has not yet intersected massive sulphides, and the EM anomaly has not yet been explained. The disseminated sulphide halo provides an important vector to guide our upcoming exploration work.”

Concurrent with this acquisition, the Company has made the decision to terminate its Option Agreement on the McBride Project in southeastern Ontario.

On March 25, 2019, Pancon entered into an Option Agreement (the “Agreement”) with 2681891 Ontario Inc. to earn a 100% interest in the St. Laurent Project, which consists of 191 single cell claims and 18 boundary cell claims within St. Laurent Township in the Larder Lake Mining Division (see map below). 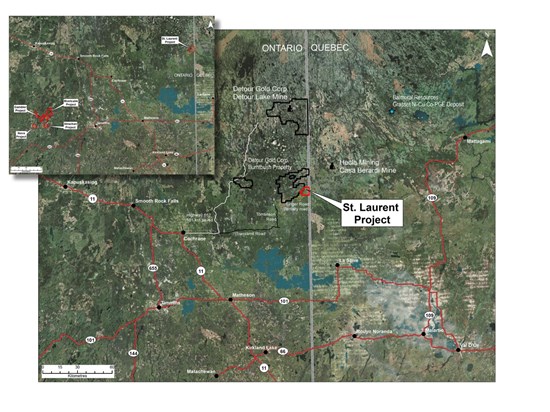 The technical information in this news release has been prepared in accordance with Canadian regulatory requirements as set out in NI 43-101 and reviewed and approved by Todd Keast, P.Geo., a Qualified Person as defined by NI 43-101. Mr. Keast is a member of Pancon’s Technical Advisory Committee and Pancon’s Projects Manager. Certain technical information within this news release is historical in nature and pre-dates NI 43-101 standards; this information is believed to be reliable however the Company has not verified this material.

Pancontinental Resources Corporation (TSXV: PUC), or Pancon, is a Canadian-based exploration company with a mission to generate value through responsible exploration of prospective assets proximal to producing/former mines in low-risk areas. Pancon holds five nickel-copper-cobalt projects in Northern Ontario. The Montcalm Project, Gambler Project, Nova Project and Strachan Project are adjacent to and near the former Montcalm Ni-Cu-Co Mine located 65 km northwest of Timmins. The St. Laurent Project has an advanced Ni-Cu-Co-Au-Pt-Pd target and is located 50 km south of Detour Lake Mine and 20 km southeast of Casa Berardi Mine. The Company also holds a 100% interest in the Jefferson Gold Project near Haile Gold Mine and adjacent to the former Brewer Gold Mine on the Carolina Gold Belt in South Carolina, USA.