September 21, 2016 (Source) — Ron Hieber is a geology graduate of Rhodes University, South Africa, with high school education having been completed in Zimbabwe, in 1968. He began his career with Anglo American Platinum, on the company’s Platinum mines in Rustenburg, followed by service on the mines in other Bushveld Complex areas, becoming Chief Geologist at Rustenburg in 1981. In 1986 he was appointed to the corporate office as head of all Anglo Platinum’s mining geology and exploration functions, which remained part of his responsibilities until he retired from Anglo Platinum at 58, in 2009. During his service with Anglo, Ron was made a Divisional Director and the Group’s Survey, Ventilation, Rock Engineering and Strategic Planning functions were added to his Geological responsibilities. From the time of his appointment at Corporate, he contributed significantly to the accumulation, retention and management of Anglo Platinum’s mineral rights portfolio, on the Bushveld Complex and Great Dyke, whilst also directing worldwide PGM Exploration Programmes for Anglo Platinum, in Australia, China, Canada, Russia and Brazil. This included heading-up the River Valley Option/Joint Venture for Anglo Platinum, from Discovery, in 2000, with Pacific North West Capital.

At the time he retired, he was a Director of several Anglo Platinum subsidiaries, including Unki Platinum Ltd. (Zimbabwe) and Rustenburg Platinum Mines Ltd. From 2009, Ron worked as Executive Director: Business Development for Kameni Ltd., which had PGM interests, in the Eastern Bushveld and Zimbabwe. After selling its projects, Kameni closed and Mr. Hieber now runs his own company, with interests in South African and Zimbabwean Gold projects.

Achievements to date and Future Plans for River Valley are outlined below as follows: 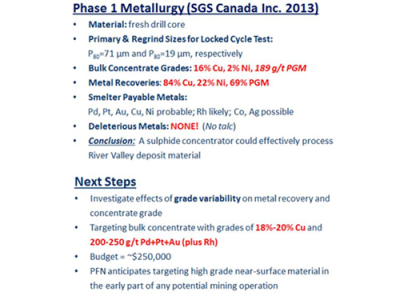 8.Results for the 2015 Discovery Drill Program on the T2 Target: 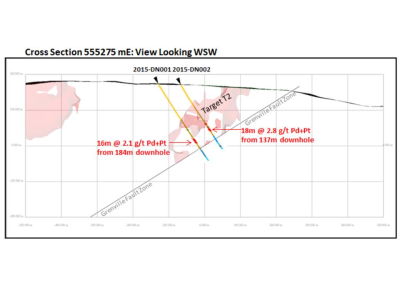 9.Exploration and Development Plans for 2016 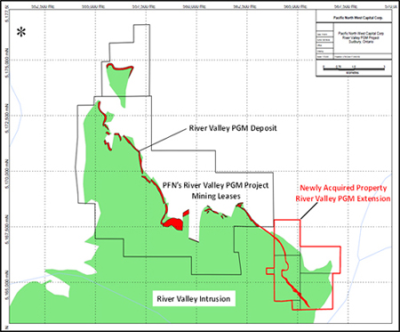 Figure 1: Geological map showing the location of the PGM Exploration Property, acquired from Mustang Minerals Corp. The acquired property is south and adjacent to PFN’s Mining Leases, covering the River Valley PGM Project. The acquisition increases the strike length of the PGM deposit, to 16 km, 64 km2, or 16,000 acres, on PFN property.

The Company’s new Lithium Division will focus on the Discovery, Acquisition, Exploration and Development of Lithium Projects in Canada. In the United States, the Company will use its wholly owned U.S.A subsidiary, to Acquire and Develop Projects in Active Mining Camps in Nevada, Arizona and California.

Management believes that these New Age Metals, Lithium, PGMs and Rare Earths, have robust macro trends with Surging Demands and Limited Supply. Going forward, this New Division will Explore for the minerals needed to fuel the demand for Energy Storage and other core 21st Century Technologies.

Lithium and Platinum Group Metal Prices have Improved Dramatically in recent months. Lithium Supplies remain in deficit, relative to their demand. Both Metals Groups are used for the expanding worldwide automobile industry (conventional and electric). In the case of PGMs, demand is increasing for Autocatalysts, a key component for reducing toxic emissions for automotive, gasoline and diesel engines. Regarding Lithium, there is an ever-increasing demand for batteries in cellphones, laptops, electric cars, solar storage, wireless charging and renewable energy products.

An aggressive 2016/17 Acquisition and Exploration Program is underway with the objective to have several projects at the drill ready stage, by early 2017. 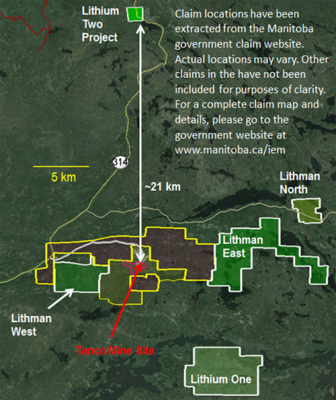 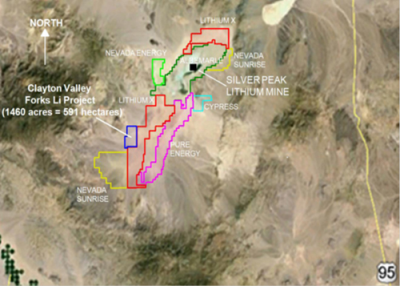 (Figure 1 is a Company-made composite and not intended for redistribution. The Company accepts no responsibility for the accuracy of these claim blocks, other than the claim block associated with the Clayton Valley Forks Li Project)

Clayton Valley is located in Esmeralda County, Nevada, host to the Albemarle Corporation’s Silver Peak Lithium Mine and Brine processing operations. The mine has been in operation since 1967 and remains the only Brine based Lithium Producer in North America. The new project acquisition in Nevada provides the Company a project, in an area that is well known for its Lithium Carbonate production. Clayton Valley is a centralized location in Nevada, with highway access, power infrastructure, water and local labour.

The company’s new Lithium Brine Project will be approximately 3.5 hours away from Tesla’s Gigafactory, which has a planned annual Lithium-ion battery production capacity of 35 gigawatt-hours per year, by 2020. The CV West Li project is located approximately 3 hours north of the Faraday Electric Car Factory to be operated in Las Vegas, Nevada. Clayton Valley is one of the few locations globally known to contain commercial-grade Lithium-Enriched Brines.

The contents contained herein that relates to Exploration Results or Mineral Resources is based on information compiled, reviewed or prepared by Dr. Bill Stone, Principal Consulting Geoscientist for Pacific Northwest Capital. Dr. Stone is the Qualified Person as defined by National Instrument 43-101 and has reviewed and approved the technical content.

Cautionary Note Regarding Forward Looking Statements: This release contains forward-looking statements that involve risks and uncertainties. These statements may differ materially from actual future events or results and are based on current expectations or beliefs. For this purpose, statements of historical fact may be deemed to be forward-looking statements. In addition, forward-looking statements include statements in which the Company uses words such as “continue”, “efforts”, “expect”, “believe”, “anticipate”, “confident”, “intend”, “strategy”, “plan”, “will”, “estimate”, “project”, “goal”, “target”, “prospects”, “optimistic” or similar expressions. These statements by their nature involve risks and uncertainties, and actual results may differ materially depending on a variety of important factors, including, among others, the Company’s ability and continuation of efforts to timely and completely make available adequate current public information, additional or different regulatory and legal requirements and restrictions that may be imposed, and other factors as may be discussed in the documents filed by the Company on SEDAR (www.sedar.com), including the most recent reports that identify important risk factors that could cause actual results to differ from those contained in the forward-looking statements. The Company does not undertake any obligation to review or confirm analysts’ expectations or estimates or to release publicly any revisions to any forward-looking statements to reflect events or circumstances after the date hereof or to reflect the occurrence of unanticipated events. Investors should not place undue reliance on forward-looking statements.

The second half of 2020 has seen a tremendous boost in electric vehicle (EV) sales globally. For example, in September […]

The commercial electric vehicle (EV) space is starting to accelerate now, boosted by Government initiatives and favorable economics. In October […]