Results reported are from 5 drill holes targeting northern extensions 800-1000m along strike of the main Millennium Inferred Resource of 5.9Mt @ 1.08% CuEq1 as defined by Hammer Metals in 2016. Results include:

Results support Metal Bank’s exploration approach at Millennium to expand the known mineralisation and justify the surface soil copper anomalism within basement rock on the eastern contact of the regional Pilgrim/Fountain Range Fault system. Importantly, substantial hydrothermal alteration is developed in this area and may indicate proximal siting for metal transport and/or deposition. This may open up potential for additional resources along strike and/or peripheral to the known resource.

Commenting on the findings at Millennium, Mitchell Smith, GEMC President and CEO said:

“The expansion of the Millenmium footprint to the north compliments the recent findings presented to the market in early September with the results validating our belief that there is a high potential to substantially increase the Resource at Millennium. They also highlight the high-grade nature of the project and the near-surface potential of the mineralization. We believe the trends seen from current and past exploration to be very promising and further support our strategy of advancing scalable high-grade battery metal projects through a partnership model.”

“Our northern extension drilling has opened up scope for additional resources at Millennium North providing us with further confidence in the expansion potential of this Project over and above the expansion of the existing Resource.  We are now evaluating potential to update that Resource and planning further extension test work for the existing Resource area and the Northern Area.”

The Millennium Project is an advanced exploration and development project located in the Mount Isa region on northwest Queensland, 19km from the Rocklands copper-cobalt processing facility. The Millennium Project holds a 2012 JORC-compliant Inferred Resource of 5.9MT @ 1.08% CuEq1 across 5 granted Mining Leases with significant potential for expansion, all proximal to processing solutions and excellent infrastructure in the Mount Isa region.

MBK has an exclusive 6 month option over the Millennium Project under its agreement with Global Energy Metals and its wholly owned subsidiary, Element Minerals Australia Pty Ltd.  At the end of the option period, MBK will have the right to commence a formal earn-in to earn up to an 80% interest in the Project.

The Millennium drilling program commenced 11 August 2021 in the Southern Area (as shown in Figure 1 below), with two reverse circulation (RC) holes for 195m (MI21RC01-02) aimed at testing resource gaps and low confidence zones as part of Resource validation work.

A further 5 RC holes for 478m (MI21RC03-07) were completed in the Northern Area (also shown in Figure 1) testing potential for mineralisation extensions in the northern part of the Project area as indicated by previous mapping, geochemistry and structural interpretation. Refer to Table 1 and Table 2 for full drilling details. 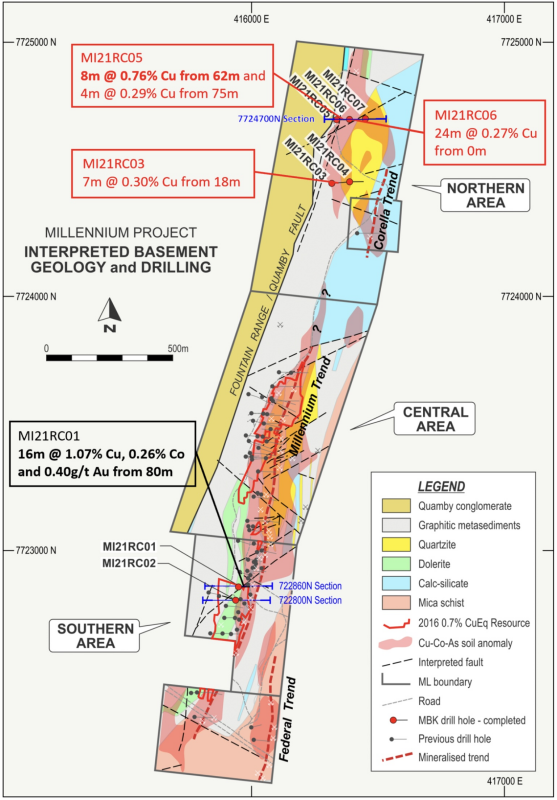 First-pass drilling in the Northern Area for (MI21RC03-07) has been completed, testing anomalous surface Co-Cu geochemistry, previously mapped geological units and structures similar to mineralisation features in the Southern and Central Areas. This area is approximately 800-1000m north along strike, has had no previous drilling and does not form part of the existing Millennium resource. Drilling was conducted in two fences on two lines 250m apart.

Copper oxides were observed near surface and sulphides were observed deeper downhole, including 8m @ 0.76% Cu from 62m (MI21RC05), associated with contact zones between metasedimentary units and graphitic siltstones. Individual Cu assays peak at 1.50% from 67m depth.

While appearing restricted to the south and east, Cu mineralisation in the Northern Area remains open to the west, north and at depth. The relationship between this mineralisation and the Fountain Range / Quamby Fault warrants further investigation.  In addition, the eastern areas are not completely drill tested. 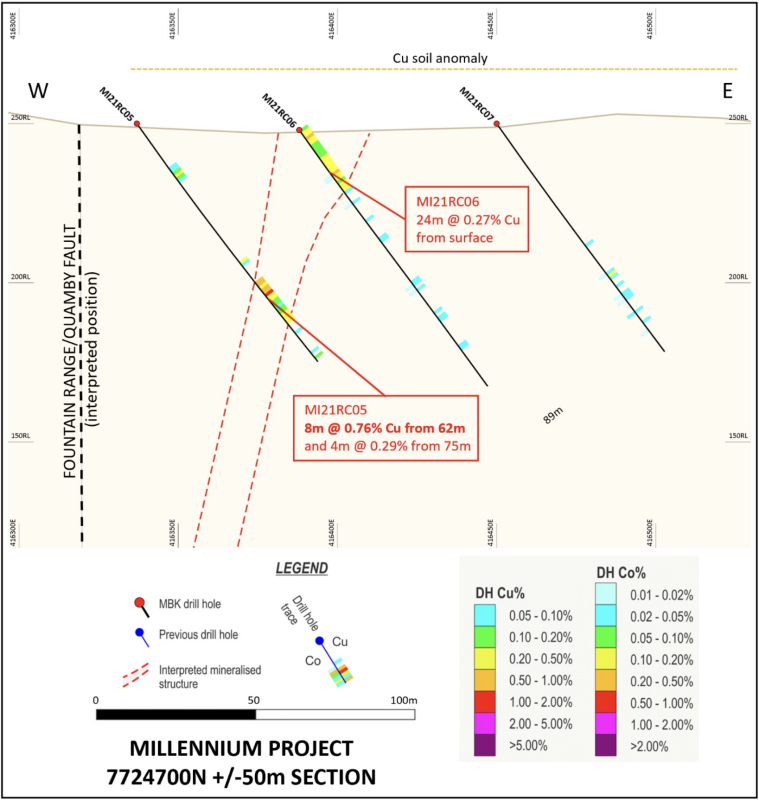 A review of the existing JORC 2012 Resource is underway to assess current scope for tonnage and grade updates, additional target areas and further work requirements in both the Southern and Central Areas of the resource.

The two holes completed by MBK tested gaps in the existing resource and the potential for extensions in the northern margin of the southern area of the resource with excellent results. Several broad zones of Cu-Co mineralisation were intersected2, with results including:

These results support the up-dip continuity of the Resource and potential northern extension of the southern resource model, in particular, within the current gap area between the southern and central resources.

In addition, the results have identified that some higher-grade zones may remain untested within the Resource area, providing confidence in the significant growth upside of the existing Inferred Resource located in the southern and central areas of the Project.

GEMC conducted a 10-hole, 1,141 metre drilling campaign on the Millennium Project during 2017 and 2018 to test the up-dip continuity at the Millennium North deposit and confirm historical estimates of cobalt mineralisation reported in 2016 by Hammer Metals.3  GEMC were successful in both duplicating historical results, demonstrating the continuity of mineralisation within the mineralised zone and in determining mineralisation continues to depth4, including 28m @0.35% Cu and 0.2% Co (MIRC026). Significantly, cobalt and copper mineralisation was encountered along the entire targeted 1500 metre strike length with the zones remaining open in all directions.5

Prior the GEMC’s involvement, the project area had been tested by only 73 drill holes (percussion, RC and diamond) for a total of 7,891 metres.  Most holes have been drilled within 200 metres of surface, with few holes reaching to depths greater than 250 metres below surface.  At present mineralisation remains open at depth and along the strike extent of the JORC resource area.6

Pending outcomes from the Resource review and scoping work, in light of the encouraging copper results in the Northern Area further work is underway to extend the basement mineralisation, define high grade target zones and understand mineralisation relationships with the adjacent Quamby/Pilgrim Fault system. Work will also seek to determine the metal zonation aspects noted between the Northern and Central/Southern Areas.

In addition, the Federal and Corella Trends require assessment for potential to add additional targets and resources to the project.

The Millennium Project is strategically located on granted mining leases, less than 20 km from the Rocklands mine site and processing facility and within the economic and infrastructure hub of Mount Isa, Queensland.

The Project presents as an excellent opportunity to acquire a copper-cobalt asset of significant size with potential to expand mineralisation. Processing solutions and excellent infrastructure exist within the Mount Isa region of Queensland.

Mr. Paul Sarjeant, P. Geo., is the qualified person for this release as defined by National Instrument 43-101 – Standards of Disclosure for Mineral Projects.

Global Energy Metals recognizes that the proliferation and growth of the electrified economy in the coming decades is underpinned by the availability of battery metals, including cobalt, nickel, copper, lithium and other raw materials. To be part of the solution and respond to this electrification movement, Global Energy Metals has taken a ‘consolidate, partner and invest’ approach and in doing so have assembled and are advancing a portfolio of strategically significant investments in battery metal resources.

As demonstrated with the Company’s current copper, nickel and cobalt projects in Canada, Australia, Norway and the United States, GEMC is investing-in, exploring and developing prospective, scaleable assets in established mining and processing jurisdictions in close proximity to end-use markets. Global Energy Metals is targeting projects with low logistics and processing risks, so that they can be fast tracked to enter the supply chain in this cycle.  The Company is also collaborating with industry peers to strengthen its exposure to these critical commodities and the associated technologies required for a cleaner future.

Securing exposure to these critical minerals powering the eMobility revolution is a generational investment opportunity. Global Energy Metals believe the the time to be part of this electrification movement.

GEMC’s operations could be significantly adversely affected by the effects of a widespread global outbreak of a contagious disease, including the recent outbreak of illness caused by COVID-19. It is not possible to accurately predict the impact COVID-19 will have on operations and the ability of others to meet their obligations, including uncertainties relating to the ultimate geographic spread of the virus, the severity of the disease, the duration of the outbreak, and the length of travel and quarantine restrictions imposed by governments of affected countries. In addition, a significant outbreak of contagious diseases in the human population could result in a widespread health crisis that could adversely affect the economies and financial markets of many countries, resulting in an economic downturn that could further affect operations and the ability to finance its operations.

For more information on Global Energy and the risks and challenges of their businesses, investors should review the filings that are available at www.sedar.com.

Whether you call it a special military operation, a preemptive strike, an armed incursion or an outright war, the impact […]