December 23, 2020 (Source) — Critical Elements Lithium Corporation (the “Corporation” or “Critical Elements“) (TSXV:CRE)(OTCQX:CRECF)(FSE:F12) is pleased to announce that it has entered into an agreement with Chilean Metals Inc. (the “Optionee”) (TSXV:CMX) to option up to 80% of the Nisk nickel-copper-PGE project (the “Property” or “Nisk-1”), in Quebec’s Eeyou Istchee James Bay territory in Quebec.

Critical Elements’ CEO, Jean-Sébastien Lavallée, noted that Critical Elements’ vision is to create a large, responsible producer of lithium to supply the flourishing electric vehicle and energy storage systems industries. “Our focus remains firmly on advancing and de-risking the Rose lithium-tantalum project (“Rose”), one of the highest purity undeveloped lithium projects globally and the Corporation’s first. Beyond Rose and Nisk-1, Critical Elements retains 100% ownership in a highly prospective land position of over 700 km2 with demonstrable lithium mineralization.”

The Corporation grants to the Optionee the exclusive right and option to acquire, on or before the date that is three (3) years from the TSX.V approval (the “Effective Date”) (the “First Option Period“), an initial 50% Earned Interest in the Property (the “First Option“), free and clear of all Encumbrances other than the Permitted Encumbrances and the Royalty, subject to the terms and conditions in this Agreement.

Requirements to Exercise the First Option

In order to acquire the 50% Earned Interest under the First Option, the Optionee must:

(a) make cash payments totalling $500,000 to the Corporation (the “Cash Payments“) on or before the dates set out below:

(i) a non-refundable amount of $25,000 on the date of execution of the agreement;

(b) issue to the Corporation within a delay of five (5) Business Days following the Effective Date, 12,051,770 Shares (the “Share Payment“) of the Optionee. The Shares issued will be issued as fully paid and non-assessable free and clear of all liens, charges and Encumbrances, and subject only to such resale restrictions and hold periods as may be imposed by applicable Securities Laws and the policies of the TSXV;

(c) incur an aggregate of $2,800,000 of Work Expenditures on the Property on or before the dates set out below:

Subject to the Optionee having exercised the First Option, the Corporation hereby also grants to the Optionee the exclusive right and option (the “Second Option”) to increase its Earned Interest in and to the Property from 50% to 80% by incurring or funding additional Work Expenditures for an amount of $2,200,000, including the delivery of a Resource Estimate, for a period commencing on the delivery of the First Option Exercise Notice and ending on the date that is four (4) years from Effective Date (the “Second Option Period”).

In the event Chilean exercises the First Option and subsequently elects not to exercise the Second Option, or in the event the Second Option is terminated, whichever the case, Chilean’s right to act as Operator shall immediately terminate and Critical Elements shall become the Operator for the future conduct of Work Expenditures and Programs on the Property.

Following the exercise of the First Option by Chilean, and in addition to the obligations of Chilean under the First and Second Option, if applicable, Critical Elements shall receive, in the event of a Lithium discovery, a royalty equal to 2% net smelter returns (the “Royalty“) resulting from the extraction and production of Lithium products, including Lithium ore, concentrate and chemical, resulting from the extraction and production activities on the Property, including transformation into chemical products. Chilean shall have the right at any time to purchase 50% of the Royalty and thereby reduce the Royalty to 1% by paying to Critical Elements a total cash amount of $2,000,000.

In the event of a Lithium discovery, Critical Elements will retain Lithium Marketing Rights meaning the exclusive right of Critical Elements to market and act as selling agent for any and all Lithium products, including Lithium ore, concentrate and chemical, resulting from the extraction and production activities on the Property, including transformation into chemical products.

Nisk is composed of two blocks totaling 90 claims covering an area of 45.9 km2 and a length of over 20 km. The Route du Nord from Chibougamau runs inside the south border of the Property. Nisk-1 is also traversed in a NE direction by a Hydro-Québec power line and a road that heads north to the Eastmain River and beyond to the La Grande River area. 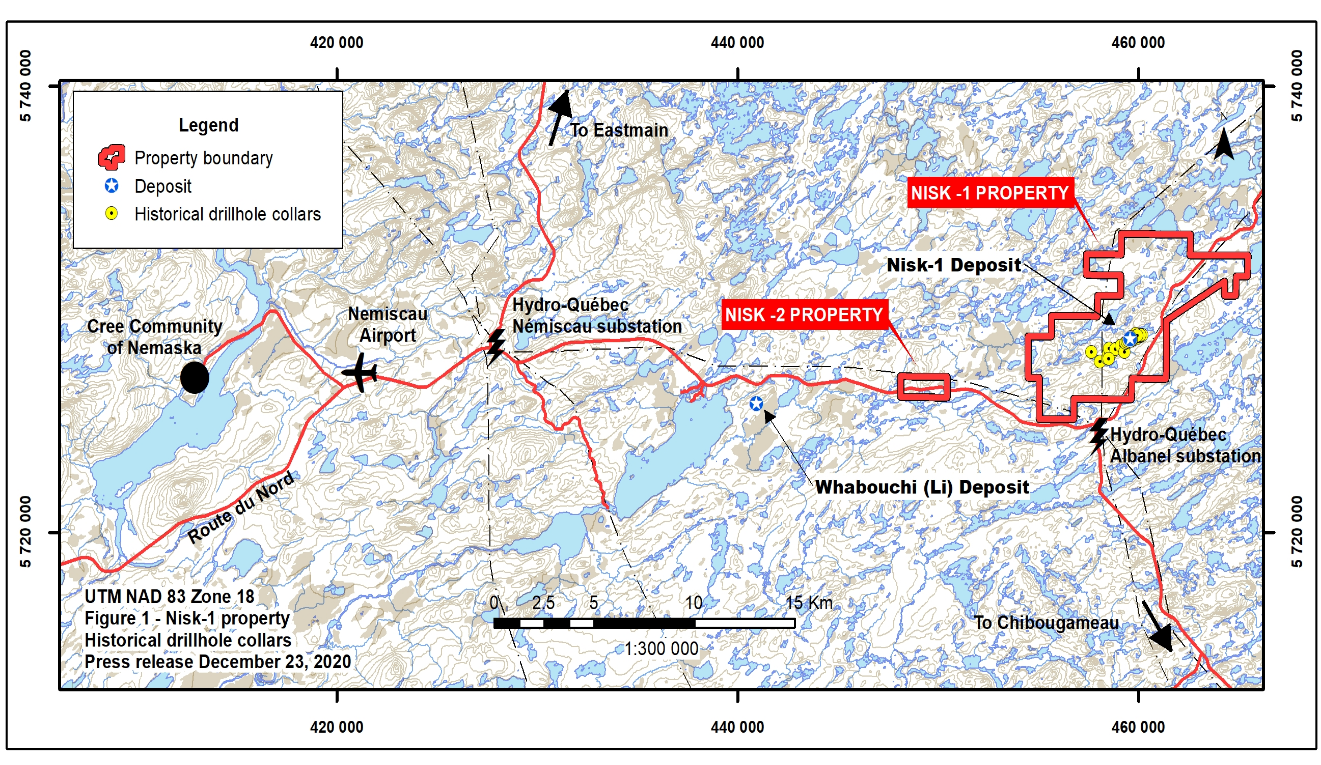 Nisk-1 is hosted in an elongated body of serpentinized ultramafic rocks that intrude the Lac des Montagnes paragneiss and amphibolite sequence. The ultramafic rock intrusion is a sill bordered by paragneisses and amphibolites. Quite similar on either side of the ultramafic sill, they still can be subdivided into a lower paragneiss sequence to the NW of the sill (stratigraphically older) and an upper paragneiss sequence to the SE of the sill (stratigraphically younger).

Nisk-1 is the only mineralized zone with estimated resources on the property. An NI 43-101 resource estimate was delivered in 2009. (The resource estimation was completed by RSW INC. by Pierre Trudel Ph.D., P.Eng. and is detailed in their report entitled Resource Estimate for the NISK-1 Deposit, Lac Levac Property, Nemiscau, Quebec, dated December 2009. The 2009 resource estimation is considered to be a “Historical Estimate” as defined by National Instrument 43-101 Standards of disclosure for mineral projects): 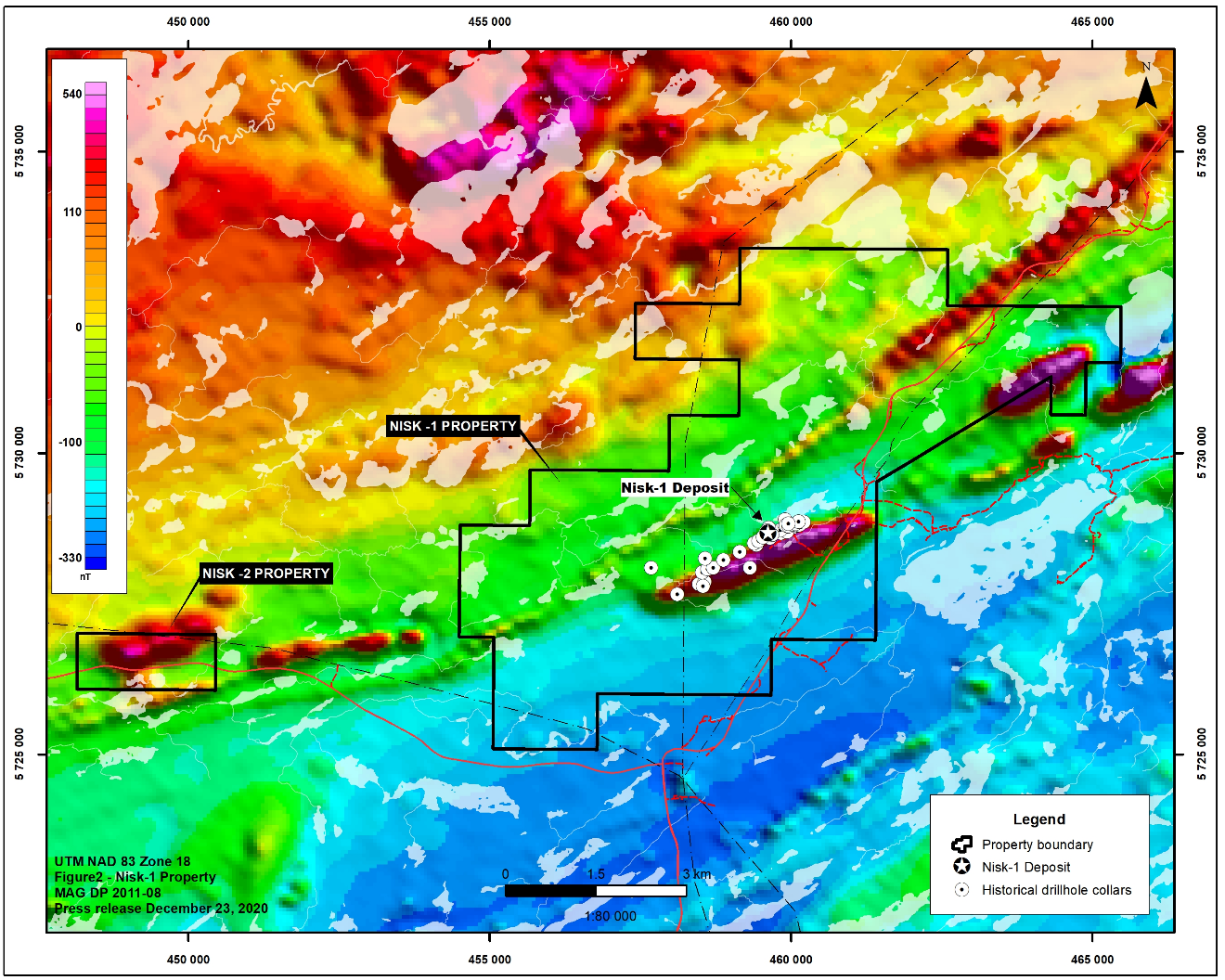 Primero Group recently completed the first phase of its Early Contractor Involvement agreement with the Corporation and provided a Guaranteed Maximum Price for the engineering, procurement and construction of the wholly-owned Rose Lithium-Tantalum project on a lump sum turnkey basis that is in line with the Project’s feasibility study published November 29, 2017. The project feasibility study is based on price forecasts of US $750/tonne for chemical-grade lithium concentrate (5% Li2O), US $1,500/tonne for technical-grade lithium concentrate (6% Li2O) and US $130/kg for Ta2O5 in tantalite concentrate, and an exchange rate of US $0.75/CA $. The internal rate of return (“IRR”) for the Rose Lithium-Tantalum project is estimated at 34.9% after tax, and net present value (“NPV”) is estimated at CA $726 million at an 8% discount rate. The estimated payback period is 2.8 years. The pre-tax IRR for the Rose Lithium-Tantalum Project is estimated at 48.2% and the pre-tax NPV at CA $1,257 million at an 8% discount rate (see press release dated September 6, 2017). The financial analysis is based on the Indicated mineral resource. An Indicated mineral resource is that part of a mineral resource for which quantity, grade or quality, densities, shape and physical characteristics can be estimated with a level of confidence sufficient to allow the appropriate application of technical and economic parameters, to support mine planning and evaluation of the economic viability of the deposit. The life-of-mine (LOM) plan provides for the extraction of 26.8 million tonnes of ore, 182.4 million tonnes of waste, and 11.0 million tonnes of overburden for a total of 220.2 million tonnes of material. The average stripping ratio is 7.2 tonnes per tonne of ore. The nominal production rate is estimated at 4,600 tonnes per day, with 350 operating days per year. The open pit mining schedule allows for a 17-year mine life. The mine will produce a total of 26.8 million tonnes of ore grading an average of 0.85% Li2O and 133 ppm Ta2O5, including dilution. The mill will process 1.61 million tonnes of ore per year to produce an annual average of 236,532 tonnes of technical and chemical grade spodumene concentrate and 429 tonnes of tantalite concentrate.

Did Nano One just enter a Cathode Evaluation Agreement with Tesla?