April 4, 2022 (Source) – On November 29, 2021, CBLT Inc. (TSXV: CBLT) (“CBLT”) reported the results from its first sampling program at Shatford Lake, Manitoba in the Bird River Pegmatite Field. Based in part on guidance from historical field notes and drill logs, CBLT’s field team located and sampled several pegmatite outcrops during the 2021 field season. A total of 14 samples were collected.

Several samples were elevated in rubidium (see table below) and some samples were also anomalous for cesium and tantalum. This geochemistry indicates the pegmatites in the area are LCT type (lithium-caesium-tantallum) and are highly prospective for further lithium exploration. 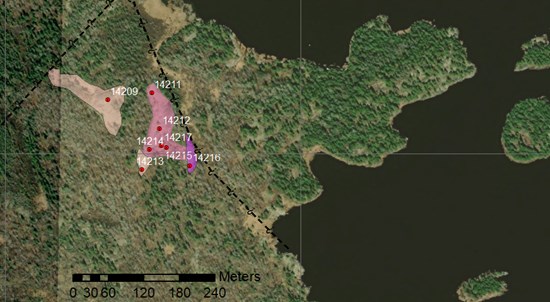 One sample, 14210, was inadvertently taken immediately adjacent to CBLT’s Shatford Lake property. This sample returned 0.534% Li2O and 0.62% Rb2O. Though this sample was taken off CBLT’s property it gives an indication of the presence of lithium-bearing LCT pegmatites in the area. The structure hosting this sample has been inferred to cross back onto CBLT’s property, and will be followed and sampled in future exploration programs.

All the above samples were from pegmatites on the western side of Shatford Lake near where a structure has been mapped by CBLT.

The field program for 2022 has already begun with a more detailed review of historical Branch Files at Manitoba Mines. These files describe numerous pegmatites but only in the context of searching for cassiterite (a tin oxide mineral that globally is a major source of tin). It does not appear that anyone historically actively explored for lithium in the pegmatites. This CBLT will do.

Cassiterite was first discovered at Tin Island located 600 meters east of the claim boundary. Cassiterite veins were trenched in the 1920’s just off the east side of the SOFTROCK 1 Claim.

Of particular interest is Manitoba Mines Branch Economic Geology Report ER84-1 Industrial Minerals in Rare-element Pegmatites of Manitoba, B.B. Bannatyne, 1985. The following text was found in ER84-1: “A 33.6 m shaft was sunk on the nearby shore of the island to the east and a crosscut to the pegmatite was made; It was followed by 18 m of drifts, but only an insignificant amount of Cassiterite was found.” The report details numerous trenched areas with LCT pegmatite potential.

The area also contains at least two more than 20-meter long trenches excavated in the pegmatite within SOFTROCK 1.

Based on CBLT’s own work and the historical records, it is obvious that CBLT’s Early Summer 2022 Field Plan will be:

For the first time, these areas will be prospected for Lithium-Cesium-Tantalum (LCT) pegmatite occurrences. The in-field portion of the program will begin as soon as possible, after snowmelt.

CBLT’s operations could be significantly adversely affected by the effects of a widespread global outbreak of a contagious disease, including the recent outbreak of illness caused by COVID-19. It is not possible to accurately predict the impact COVID-19 will have on operations and the ability of others to meet their obligations, including uncertainties relating to the ultimate geographic spread of the virus, the severity of the disease, the duration of the outbreak, and the length of travel and quarantine restrictions imposed by governments of affected countries. In addition, a significant outbreak of contagious diseases in the human population could result in a widespread health crisis that could adversely affect the economies and financial markets of many countries, resulting in an economic downturn that could further affect operations and the ability to finance its operations.