Exploration on the project consisted of reviewing, characterising and sampling all the known surface pegmatites. Fractionation samples of feldspars and micas were also collected and this will give the company an indication as to the degree of fractionation of the pegmatite with the more fractionated pegmatites being the bodies that are more conducive to containing Lithium minerals and Rare Metal minerals. 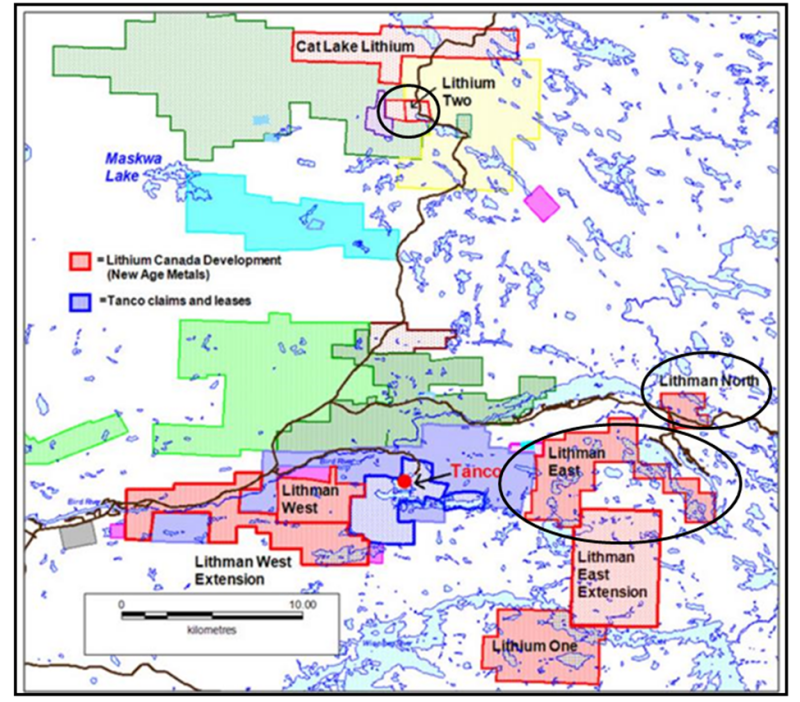 Lithium Two Project has several known Spodumene bearing pegmatites. The Eagle Pegmatite was drilled in 1947 with a historic (non 43-101 compliant) tonnage estimate of 544,460 tonnes with a grade of 1.4% Li2O to the 61 meter level. The deposit remains open to depth. The FD5 Pegmatite, located east of the Eagle Pegmatite has never been drilled.

In an effort to check the purity of the Spodumene, a sample of Spodumene blades was sampled from the FD5 Pegmatite. This sample yielded an assay of 7.62% Li2O. A review of Spodumene Mineral Data (http://webmineral.com/data/Spodumene) indicates that Spodumene can have a Li2O content from 3.73 to 8.03% Li2O. This would tend to indicate that the Spodumene present in the pegmatites dykes on the project is of a high purity.

The company also entered into an agreement (News Release- July 11th, 2018) with Grid Metals (formerly Mustang Minerals) for the rights to explore for Lithium and Rare Metals on the claim directly adjacent to the west of the Lithium Two Project as to further examine the strike projection of the Eagle Pegmatite. Phase Two of surface exploration north of Cat Lake will examine this claim, the westward projection of the eagle Pegmatite at surface as well as prospect the recently staked Cat Lake Project claims (News Release – June 6th, 2018). 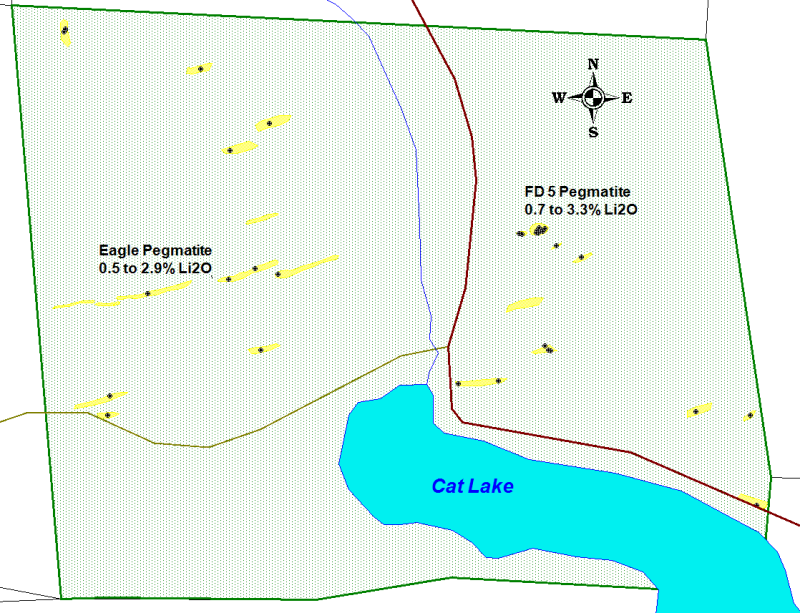 Compilation of historic assessment reports revealed a Spodumene bearing pegmatite drilled in the late 1940’s approximately 500 meters southeast of the Eagle Pegmatite surface exposure but not exposed on surface. No grades were provided at the time. This pegmatite will be drill tested during the upcoming drill program. The company applied for a drill work permit in the spring of 2018 and is presently waiting for approval from the province.

Even though Lithium is the main focus of the exploration it should be noted that the pegmatites also show elevated Tantalum values that may be of an economic interest. Pegmatites elsewhere on the project did not reveal significant Lithium mineralization; however, several were elevated in Tantalum. Fractionation work is currently be undertaken by the company’s geological consultants. Results will be reported at a later date.

All samples were analyzed at the Activation Laboratories facility, in Ancaster, Ontario. Samples were prepared, using the lab’s Code RX1 procedure. Samples are crushed, up to 95% passing through a 10 mesh, riffle split, and then pulverized, with mild steel, to 95%, passing 105 ?m. Analyses were completed, using the lab’s Ultratrace 7 Package; a Sodium Peroxide Fusion which allows for total metal recovery and is effective for analysis of Sulphides and refractory minerals. Assay analyses are carried out, using ICP-OES and ICP-MS instrumentation. New Age Metals implemented a QA/QC field program with insertion of blanks at regular intervals. Activation Laboratories has their own internal QA/QC procedures that it carries out for all sample batches.

The exploration crew has completed surface exploration on the Lithman North Project with 30 samples collected and sent to the assay lab. The Company is awaiting results. Results will be combined with 2016 field work for a final report on the project. 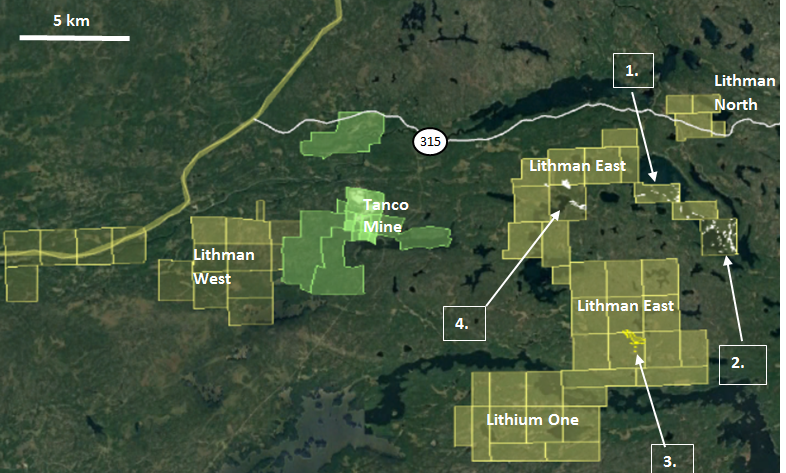 2018 Lithman East Mapped and Sampled Areas (as referenced in Figure 3): 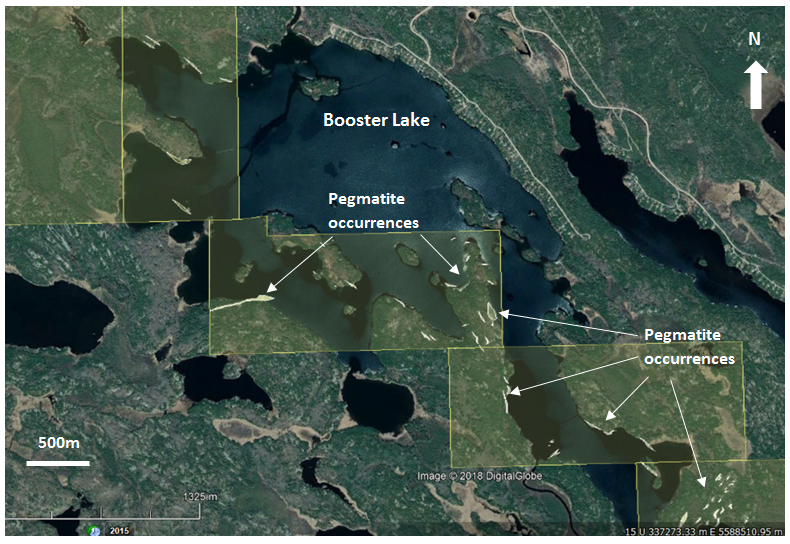 All observed mapped and inferred pegmatites (drawn in white) range from 1 to 3 meters surface thickness with undetermined strike length due to limited outcrop exposure. Some pegmatites measure as wide as 30 meters thickness. The pegmatite units are generally strata form with regional stratigraphic and/or major regional structural fabric, but local late oblique veining also is common. 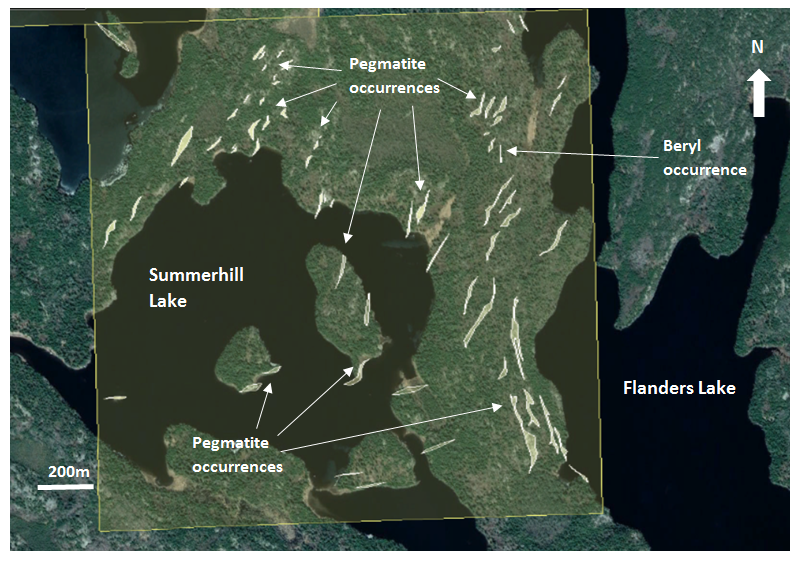 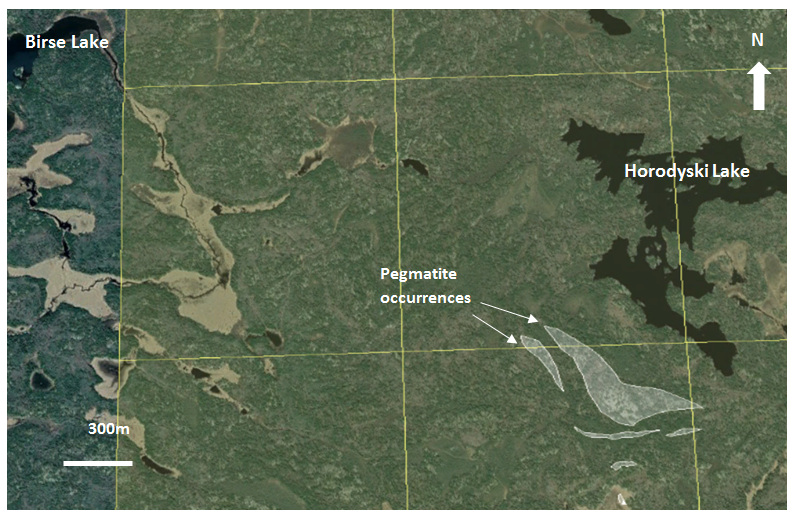 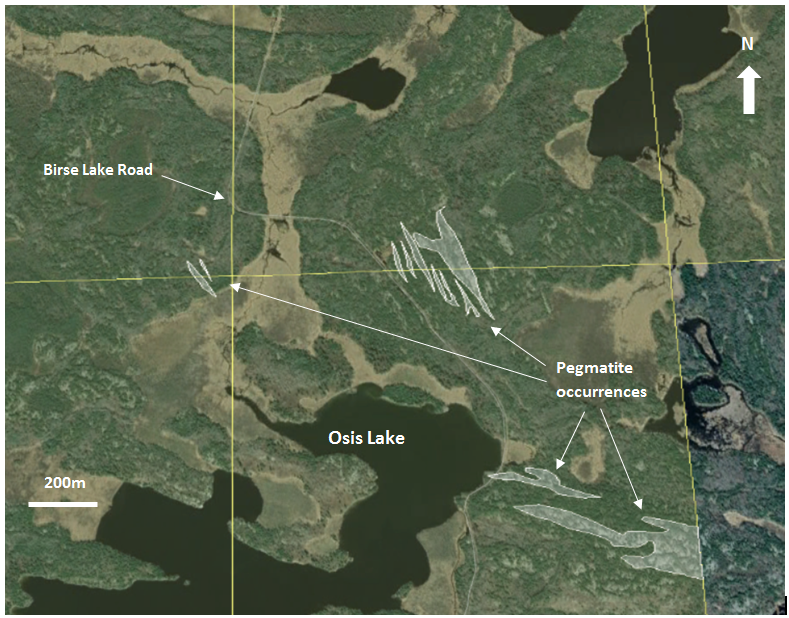 In January of 2018, NAM announced a signed final agreement with Azincourt Energy Corp. (TSX.V: AAZ) for the Manitoba Lithium Projects. (News Release: January 15th, 2018) This Pegmatite Field hosts the world class Tanco Pegmatite that has been mined for Tantalum, Cesium and Spodumene (one of the primary Lithium ore minerals) in varying capacities, since 1969. NAM’s Lithium Projects are strategically situated in this prolific Pegmatite Field. Presently, NAM, under its subsidiary Lithium Canada Developments, is one of the largest mineral claim holders in the Winnipeg River Pegmatite Field for Lithium. Azincourt Energy Corp. as our option/joint venture is financed for and has committed to a minimum of $600,000 to be expended on exploration in Manitoba for 2018.

NAM’s flagship project is its 100% owned River Valley PGM Project (NAM Website – River Valley Project) in the Sudbury Mining District of Northern Ontario (100 km east of Sudbury, Ontario). Presently the River Valley Project is North America’s largest undeveloped primary PGM deposit with Measured + Indicated Mineral Resources of 160 million tonnes @ 0.44 g/t Palladium, 0.17 g/t Platinum, 0.03 g/t Gold, with a PdEq metal grade of 0.90 g/t at a cut-off grade of 0.4 g/t PdEq equating to 3,297,000 ounces PGM plus Gold and 4,626,000 PdEq Ounces (Table 1). This equates to 4,626,250 PdEq ounces M+I and 2,714,000 PdEq ounces in Inferred (see May 8th, 2018 press release). NAM is currently conducting Phase 4 of their proposed 2018 exploration and development program. The current program is based on recommendations of previous geophysical studies and reviews by the company’s consultants, recent drilling, ongoing advanced metallurgical and minerology studies and selective pit design drill programs. The results of Phase 4 will assist in early PEA work being conducted by P&E Mining Consultants Inc and DRA Americas Inc and is meant to contribute towards the River Valley PEA. Mr. Michael Neumann, P.Eng., a veteran mining engineer and one of NAM’s directors, will oversee the completion of the PEA. On July 25th, 2018, NAM announced that P&E Mining Consultants will lead the Preliminary Economic Assessment (PEA) on the 100% owned River Valley PGM Project. This will be the first economic study completed on North America’s largest undeveloped primary PGM project. For more details on this announcement please click here. See the most recent press releases for the River Valley Project PEA dated July 25, 2018 and August 1, 2018.

On April 4th, 2018, NAM signed an agreement with one of Alaska’s top geological consulting companies. The companies stated objective is to acquire additional PGM and Rare Metal projects in Alaska. On April 18th, 2018, NAM announced the right to purchase 100% of the Genesis PGM Project, NAM’s first Alaskan PGM acquisition related to the April 4th agreement. The Genesis PGM Project is a road accessible, under explored, highly prospective, multi-prospect drill ready Palladium (Pd)- Platinum (Pt)- Nickel (Ni)- Copper (Cu) property. A comprehensive report on previous exploration and future phases of work is slated for completion by early August 2018 on Genesis. This report will be completed by Avalon Development of Fairbanks Alaska.

After the Avalon report has been submitted to NAM, management will then actively seek an option/joint-venture partner for this road accessible PGM and Multiple Element Project using the Prospector Generator business model.

The results of the updated Mineral Resource Estimate for NAM’s flagship River Valley PGM Project are tabulated in Table 1 below (0.4 g/t PdEq cut-off).

The summer exploration plan has begun for the company’s Lithium Division, Lithium Canada Development. NAM has 100% ownership of eight pegmatite hosted Lithium Projects in the Winnipeg River Pegmatite Field, located in SE Manitoba, with focus on Lithium-bearing Pegmatites. Three of the projects are considered drill ready. This Pegmatite Field hosts the world class Tanco Pegmatite that has been mined for Tantalum, Cesium and Spodumene (one of the primary Lithium minerals) in varying capacities, since 1969. NAM’s Lithium Projects are strategically situated in this prolific Pegmatite Field. Presently, NAM is the largest mineral claim holder for Lithium and Rare Metal projects in the Winnipeg River Pegmatite Field.

The contents contained herein that relate to Exploration Results or Mineral Resources is based on information compiled, reviewed or prepared by Carey Galeschuk, a consulting geoscientist for New Age Metals. Mr. Galeschuk is the Qualified Person as defined by National Instrument 43-101 and has reviewed and approved the technical content of this news release with regard to technical aspects of the Lithium Division.

Cautionary Note Regarding Forward Looking Statements: This release contains forward-looking statements that involve risks and uncertainties. These statements may differ materially from actual future events or results and are based on current expectations or beliefs. For this purpose, statements of historical fact may be deemed to be forward-looking statements. In addition, forward-looking statements include statements in which the Company uses words such as “continue”, “efforts”, “expect”, “believe”, “anticipate”, “confident”, “intend”, “strategy”, “plan”, “will”, “estimate”, “project”, “goal”, “target”, “prospects”, “optimistic” or similar expressions. These statements by their nature involve risks and uncertainties, and actual results may differ materially depending on a variety of important factors, including, among others, the Company’s ability and continuation of efforts to timely and completely make available adequate current public information, additional or different regulatory and legal requirements and restrictions that may be imposed, and other factors as may be discussed in the documents filed by the Company on SEDAR (www.sedar.com), including the most recent reports that identify important risk factors that could cause actual results to differ from those contained in the forward-looking statements. The Company does not undertake any obligation to review or confirm analysts’ expectations or estimates or to release publicly any revisions to any forward-looking statements to reflect events or circumstances after the date hereof or to reflect the occurrence of unanticipated events. Investors should not place undue reliance on forward-looking statements.

Power Nickel to Present at the Emerging Growth Conference on Wednesday, May 25, 2022

Power Nickel Invites Individual and Institutional Investors As Well as Advisors and Analysts, To Attend Its Real-Time, Interactive Presentation at […]

Radiographic contrast media are substances used in diagnostic imaging tests such as ultrasound, X-rays, CT scans and MRI to enhance […]