The new claims comprise 3,243 hectares (8,014 acres), expanding the Property area to a total of 17,577 hectares (43,434 acres). Both claims were staked over legacy occurrences of interest. Historic assessment records indicate that additional Hawker surface uranium occurrences were discovered to the east of the previous land package. The new staking around Hawker ensures that all of the historic surface occurrences and potential geological trends are located within the Alces Lake property.

The McInnis area was staked based on references to biotite-rich, radioactive outcrops discovered and trenched in the late 1960’s. No mention of Th or rare earth elements were made in the historic report, but based on the Company’s experience in the region, it is believed that the McInnis occurrences are part of the rare earth minerals system. McInnis is located ~12 km south-southwest, and along geological and geophysical strike of the Alces Lake high-grade outcrops.

The two new land acquisitions now provide Appia with an additional 11 km of prospective trends to explore for additional high-grade rare earth element and uranium zones, bringing the total to 41 km along a continuous regional geological trend. Appia is the largest landholder in an emerging rare earth minerals system district in northern Saskatchewan.

The Alces Lake Property encompasses some of the highest-grade total REE mineralization in the world, hosted within a number of surface and near surface occurrences that remain open at depth and along strike. The United States government is actively pursuing REE resources to ensure a domestic REE supply chain becomes established within North America. The Alces Lake property now totals 17,577 hectares (43,435 acres) in size and is 100% owned by Appia. The project is located close to an old mining camp with existing support services, such as transportation (i.e., 15 km from the nearest trail), energy infrastructure (hydroelectric power), a 1,200 m airstrip that receives daily scheduled services, and access to heavy equipment.

The Company also wishes to announce that it has granted 1,200,000 options to the Directors, an Officer and Consultants of the Company. The options are exercisable at a price of $0.25 for a period of five years. 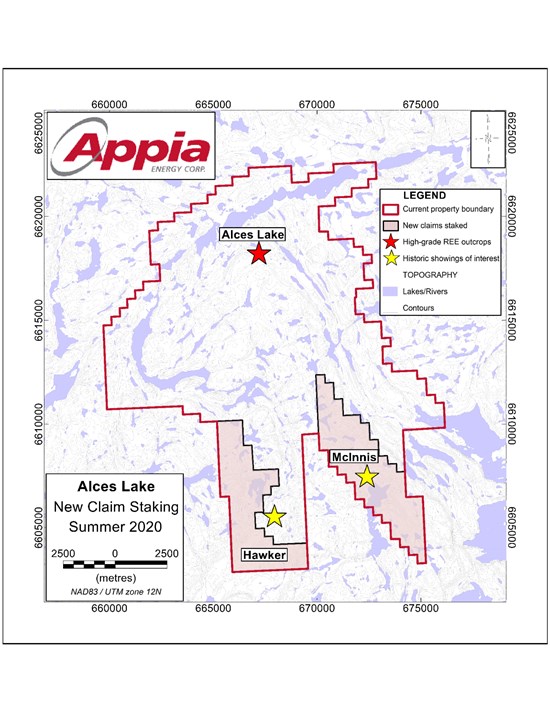