The Company successfully identified numerous pegmatite dykes (“dykes“) in outcrops ranging in thickness from 1 metre to greater than 20 metres width exhibiting elevated radioactivity (>300 counts-per-second (“cps“)) (see Figure 1). A majority of the dykes could typically be followed for more than 10 metres along strike-length before being lost underneath overburden. Discrete trends (from 1 metre to 3 metres thick) within the dykes contained spotty anomalous radioactivity (>1,000 cps) to “off-scale” radioactivity (>9,999 cps). Two dykes with the most radioactivity rock exposure (Area 51 and Area 7575) were channel sampled and returned composite sample grades with uranium concentrations exceeding 0.01 wt% U3O8 (see Figures 1 and 2, and Table 1). Areas 51 and 7575 are on strike with each other but are separated by 1.5 km which is covered by overburden.

Four separate occurrences of “off-scale” radioactivity were identified along four different dyke trends, however only one of those was exposed well-enough at surface to be channel sampled (Area 51, Line 3 channel sample). Helicopter reconnaissance identified three large areas (>500 m x >500 m) with many dykes exposed at surface, however time was limited and those outcrops were not visited.

Mr. James Sykes, Vice-President, Exploration and Development, comments; “We are encouraged by the surface radiometric and assay results from the Eastside property. The multiple occurrences of “off-scale” and numerous trends of anomalous radioactivity demonstrate significant potential for surface-hosted uranium mineralization on the property. The composite U3O8 grades from Eastside are comparable to other world-class open pit uranium mines, such as the Rössing and Husab uranium mines in Namibia. Based on historic assay results and those obtained from Line 3 of Area 51, we believe zones with higher uranium grades are possible on the Property. The property remains underexplored as i) numerous prospective outcrops have yet to be visited, ii) the currently identified surface trends (i.e. over 1.5 km between Area 51 and Area 7575) would require overburden to be removed to fully realize the potential of the mineralized strike-lengths, and iii) diamond drilling has never been conducted on the property to fully realize the depth potential that might exist”.

Ground reconnaissance prospecting, mapping, and channel sampling was completed on the Eastside property over four days. A total of 139 channel samples ranging from 0.27 to 1.31 m in length were removed from outcrops in Area 51 and Area 7575 for a total of 77.69 m and 33.65 m, respectively.

Eight outcrop areas were visited on the Loranger property over a total of 3 days. Similar to the Eastside property, pegmatite dykes with elevated radioactivity were discovered within outcrops. Of particular interest was a pegmatite-rich outcrop area (Area D) with anomalous and elevated radioactivity trends observed within 100 to 300 m of a bifurcating and bending conductor. As has been observed on the property in previous exploration programs, radioactivity levels tend to increase with proximity to graphitic conductors suggesting the graphitic structural trends remain the primary focus for continued exploration on the property. No conductive outcrops were exposed on the property.

The same geological formations at the southern end of the property can be inferred (by airborne magnetic signatures) to continue over 45 km to the north end of the property within the RCV and gravity low target areas that were drilled in 2017. Diamond drilling in the RCV area returned 72.9 m at 0.012 wt% U3O8 (see news release dated May 24, 2017).

Mr. James Sykes, Vice-President, Exploration and Development, comments: “This field program was instrumental in identifying geological controls that can help vector us towards more uranium mineralization on the property. Of interest is the new REE discovery on the property which does bear grades similar to those that have been observed at Appia’s Alces Lake high-grade REE property. Only one sample was taken from that trend and it remains open along strike in both directions for quite some distance. We plan to follow-up this area in the future”.

All radioactivity measurements were made with an Exploranium GR-110 hand-held scintillometer. The GR-110 readings max out at 9,999 cps, therefore any occurrences exhibiting 9,999 cps are considered “off-scale” because natural radioactivity can exceed 10,000 cps. Background radioactivity on all of the outcrops ranged from 100 to 200 cps. The reader is cautioned that Appia uses natural gamma-ray readings only as a preliminary indication of the presence of radioactive materials (uranium-, thorium- and/or potassium-rich minerals) and that the results may not be used directly to quantify or qualify uranium concentrations within the rock.

All samples were hand-delivered to and assayed by Saskatchewan Research Council’s Geoanalytical Laboratory, an ISO/IEC 17025:2005 (CAN-P-4E) certified laboratory in Saskatoon, SK, for multi-element analysis.

Appia would like to invite the general public to join Mr. Tom Drivas, CEO & President, for a live public webcast on Tuesday July 21, 2020, starting at 12:30 PM EST, as part of the Wall Street Reporter’s “Investors Discovery Day” livestream event.

The livestream can be accessed via the link below:

For more information, visit the Appia website at www.appiaenergy.ca. 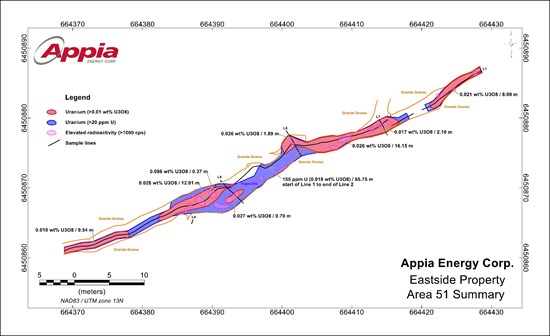 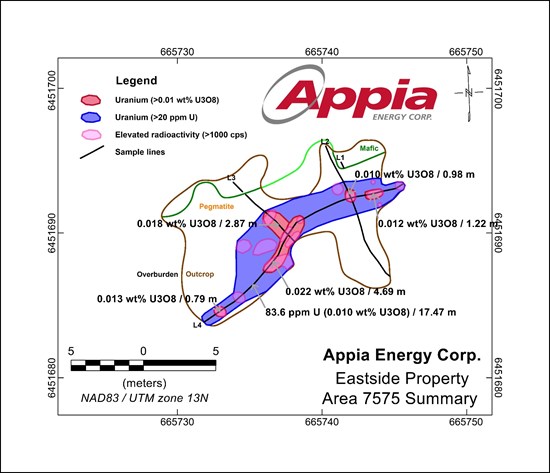 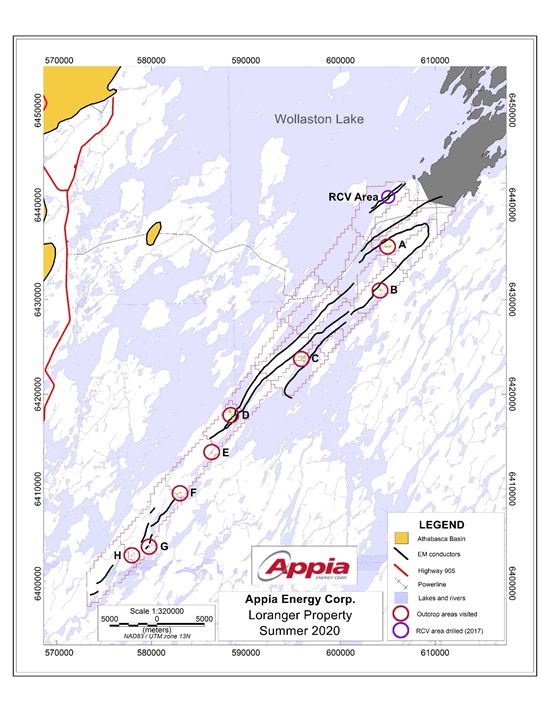 To view an enhanced version of this graphic, please visit:
https://orders.newsfilecorp.com/files/5416/60183_img.jpg