Appia Provides a Summary of the Alces Lake Project and Presents at the John Tumazos Virtual Conference, August 10, 2020

Since detailed exploration began at Alces Lake in 2017, a total of seventy-four (74) REE and uranium-bearing surface zones* and occurrences* of the REE and U minerals system(s) (the “Minerals System“) have been discovered on the Property (Figure 1). To date, less than 15% of the Property surface has been explored on the ground. The zones all share numerous similarities with each other; high REE grades (>2 wt% total rare earth oxides, “TREO“) are hosted within both biotite-rich quartzo-feldspathic pegmatites and/or thick biotite-rich pods (“cores“), and low-grade REE mineralization (<2 wt% TREO) are hosted within quartzo-feldspathic pegmatites with very little biotite present (“halos“). Appia uses the geological information from the low-grade halos to target the high-grade cores.

Surface channel and diamond drill samples from within six zones (Bell, Charles, Dante, Dylan, Ivan, Wilson) return an average composite grade of 16.65 wt% TREO (see Table 1). The Ivan zone, in particular, hosts some of the highest grades observed on the Property. Surface mineralization from the Ivan zone returned up to 53.01 wt% TREO over 1.97 m, or ~85% monazite, i.e., the mineral hosting the REEs. Diamond drill hole IV-19-012 intersected 16.06 wt% TREO over 15.55 m, including 49.17 wt% TREO over 3.70 m. Critical elements required for rare earth magnets (neodymium, praseodymium, dysprosium and terbium) account for between 23% and 25% of the TREO. Rare earth magnets are used in a wide range of modern technological applications. Hence, the rare earth magnet industry is projected to grow rapidly over the next 30 years in-line with the adoption of electric vehicles and wind turbines, in particular.

The Minerals System has been discovered as far as 12 km away from the Company’s previous areas of diamond drilling, and the cumulative showings represent approximately 10 km of a 45 km-long regional strike length. The scale and high-number of surface discoveries suggests the Minerals System is widespread at surface, but it is not readily detectable by eye or other surface geophysical methods due to overburden cover. The Company believes that the Minerals System is even more connected, widespread, and voluminous beneath the surface.

Appia has started mobilizing for Phase 2 exploration on the Alces Lake property, which will include diamond drilling geological and geophysical targets, additional AMT geophysical survey coverage, excavated overburden removal and outcrop washing in areas of interest. The exploration permits are in-hand to begin this work.

Appia would also like to invite the general public to view a live public webcast presentation on Monday August 10, 2020, from 11:00 AM – 11:55 AM (EDT) as part of the John Tumazos Very Independent Research, LLC, Virtual Conference.

The audience registration link is https://zoom.us/webinar/register/WN_DY9ra1PGTFakcuxVIeWUFw.

We sincerely hope you can attend.

Appia is a Canadian publicly-traded company in the uranium and rare earth element sectors. The Company is currently focusing on delineating high-grade critical rare earth elements (“REE”) and uranium on the Alces Lake property, as well as prospecting for high-grade uranium in the prolific Athabasca Basin on its Loranger, North Wollaston, and Eastside properties. The Company holds the surface rights to exploration for 65,601 hectares (162,104 acres) in Saskatchewan. 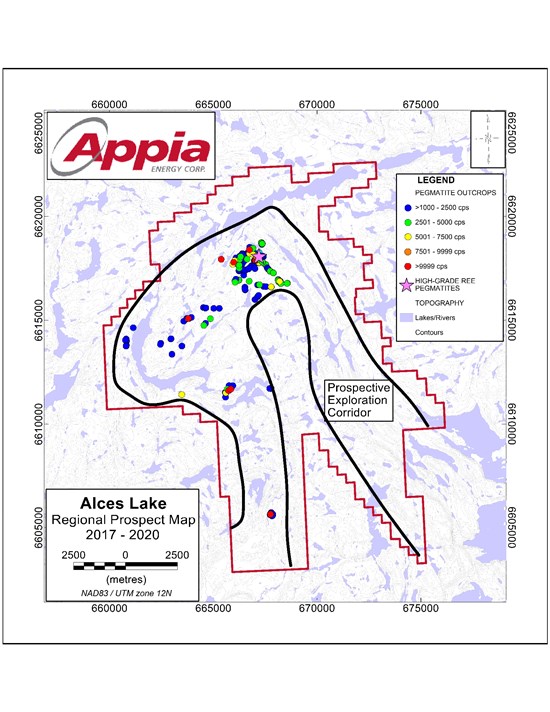 To view an enhanced version of this graphic, please visit:
https://orders.newsfilecorp.com/files/5416/61373_capture.jpg