Highlights from the drill program include:

See Figure 1 for a location map of the drill hole collars and traces, and Table 1 for a summary of results from all 18 drill holes.

Mr. James Sykes, Vice-President, Exploration and Development, comments: “The results of the Program have achieved a number of milestones. We have successfully confirmed high-grade mineralization over 145 m strike length at the WRCB zone, and we’ve also identified two trends of the System occurring over a 875 m strike length, which defines our current drill limits. The System was intersected down to 340 m vertical depth, which indicates this System is large and extensive. We’ve identified both structural and lithological controls on the System, the latter having an importance for the rest of the Property as we’re seeing a direct relationship between the System and i) an Archean/Paleoproterozoic transition and ii) an amphibolite layer, both of which provide first-order controls on the location of emplacement of the pegmatites (and REE mineralization) within the System. The amphibolite layer also hosts the System at the Oldman River showing (see News Release dated September 3, 2020). This suggests that the System, and both first-order lithological emplacement controls, could be present across the entire 45 km geological strike length of the Property at/near surface and continuing at depth. We’re also excited about the drill hole results confirming the AMT geophysical interpretations. This provides a key exploration tool for us, as we now have a targeting tool to assist with continued depth investigations by diamond drilling.”

Drill holes DN-20-001, DN-20-003, DN-20-004, and ER-20-001 were all short exploration holes down to drill depths between 20 and 30 m testing for near-surface continuity of the System in the Danny (DN) and Ermacre (ER) areas. All four drill holes successfully intersected the System and have provided invaluable geological information for continued exploration in those areas.

Drill holes CO-20-002, HN-20-001, WI-20-008, and WI-20-009 were all deep exploration holes, targeting drill depths between 170 and 330 m and have successfully proven the existence of multiple lens shaped zones (4 to 5 discrete zones) with variable thickness ranging from 5 cm to 9.4 m thick, with an average thickness of 1.0 m. The latter three drill holes contained visibly disseminated monazite in some of the intersections.

These drill holes will help provide a geological context for targeting thicker occurrences of the System with future exploration programs. The larger intersections in the drill holes have discrete lithological controls, most notably an Archean/Paleoproterozoic transition and an amphibolite layer. These lithological controls suggest that the larger parts of the System are continuous over the 875 m strike length of the drilling defined domain, and possibly across the entire 45 km geological strike length of the Property. The thinner intersections of the System tend to be discontinuous from drill hole to drill hole, however some of these intersections are oriented in directions that were sub-parallel to drilling, suggesting continuity is possible with other mineralized zones.

Drill holes CO-20-001, DN-20-002 and WI-20-005 through WI-20-007 were all designed to help improve the interpretation of a one-line, AMT geophysical survey that was completed by Advanced Geophysical Operations and Services (“AGCOS“) of Markham, Ontario, during Phase I of the summer exploration period (see News Release dated June 29, 2020). Two iterations of geophysical interpretations were used to target geophysical anomalies with the drill holes. The latter iteration has provided the Company with results that match with drill hole intersections. The Company will continue to work with AGCOS to further refine their interpretation and to follow-up with a larger geophysical program next summer.

Mr. Sykes further comments: “We want to thank our drill contractor, Apex Diamond Drilling Ltd. (“Apex“) of Smithers, British Columbia, and our helicopter support, Vortex Helicopters of Fort McMurray, Alberta, for their professional and efficient work. The Program started late due to the global COVID-19 pandemic, which affected receipt of permits, but Apex still completed over 2,500 m of diamond drilling in four weeks with one drill, which is very productive by industry standards. Unfortunately, the Program was cut short due to unfavourable weather conditions.”

Since detailed exploration began at Alces Lake in 2017, a total of seventy-four (74) REE and uranium bearing surface zones and occurrences of the System have been discovered on the Property. To date, less than 1% of the Property has been explored with diamond drilling. The Property is located in Saskatchewan, the same provincial jurisdiction that has planned to develop a “first-of-its-kind” rare earth processing facility in Canada, which is scheduled to become operational by 2022.

The Property encompasses some of the highest-grade total and critical rare earth elements (“CREE“) mineralization in the world. CREE is defined here as those rare earth elements that are in short-supply and high-demand for use in permanent magnets and modern electronic applications such as electric vehicles and wind turbines, (i.e: neodymium (Nd), praseodymium (Pr) dysprosium (Dy), and terbium (Tb)). The Alces Lake project area is 17,577 hectares (43,434 acres) in size and is 100% owned by Appia. The project is located close to an old mining camp with existing support services, such as transportation (i.e., 15 km from the nearest trail), energy infrastructure (hydroelectric power), a 1,200 m airstrip that receives daily scheduled services, and access to heavy equipment.

Drill core samples have been delivered to the Saskatchewan Research Council Geoanalytical Laboratory, an ISO/IEC 17025:2005 (CAN-P-4E) certified laboratory in Saskatoon, SK, for major element and REE analysis. Results will be released once received and interpreted by the Company.

Appia is a Canadian publicly-listed company in the uranium and rare earth element sectors. The Company is currently focusing on delineating high-grade critical rare earth elements (“REE”) and uranium on the Alces Lake property, as well as prospecting for high-grade uranium in the prolific Athabasca Basin on its Loranger, North Wollaston, and Eastside properties. The Company holds the surface rights to exploration for 57,048 hectares (140,968 acres) in Saskatchewan. 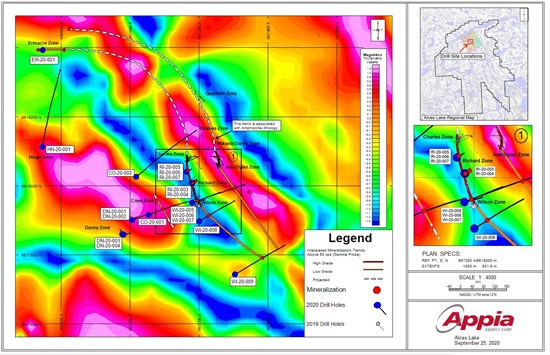 The cannabis sector has had a bit of a rough go over the last year or so, to say the […]

Did you know that LEAF Mobile Inc. is now East Side Games Group Inc. (TSX: EAGR | OTCQB: EAGRF)? The […]