Frederick Kozak, President of Appia said, “Building on our experience of 2021 at Alces Lake, Appia got an early start in March on the planned 2022 drilling program. Kudos to the entire team of drillers, helpers, camp support and the geology team for this record accomplishment. Appia drilled more than double the 2021 metreage in less time than the previous year’s program. We have accomplished all of our initial phase drilling goals and now eagerly await assay results to plan the next phase of drilling. New high resolution aerial geophysics will be flown soon and this will also add to the inventory of potential exploration targets at Alces Lake.”

Appia has completed drilling of 100 holes in 2022 for a record total of 17,480.9 metres. This was accomplished in just four and a half months, as compared to the 2021 program which took over five months to drill 8,076 metres and 100 holes. The exceptional drilling progress resulted in Appia achieving the drilling goals much faster than anticipated. The last of the core samples for assay are being prepared before being sent out to the two labs which are processing the Alces Lake samples. Appia anticipates receiving assay results from the early part of the 2022 drilling program in the near future and will evaluate and analyze these in-house prior to public release.

In the 2022 drilling program, a total of 37 holes were drilled into WRCB to continue delineation of the high-grade REE mineralization and also delineate previously undrilled targets in Danny (adjacent to WRCB) as well as additional drilling into the Wilson/Wilson North zone. New WRCB drilling also extended the trend of the REE mineralization by approximately 120 metres along strike to a total of 280 metres of strike-length mineralization. The WRCB accumulation remains open in both the northwest and southeast directions. 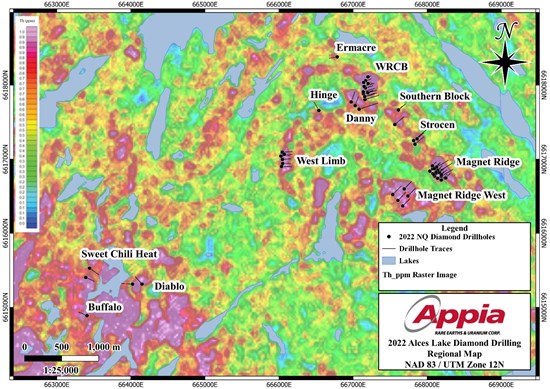 The most significant new drilling in 2022 was in the Magnet Ridge (previously Augier) area, located approximately 1.5 kilometres south-southeast of WRCB on a well defined regional geologic corridor. A total of 34 holes (5,318 metres) were drilled into the primary Magnet Ridge target that outcrops on surface. A nearby (and possibly geologically related) prospect on Magnet Ridge West saw another 10 holes (2,025.9 metres) drilled. The rocks in these two prospects appear to be geologically similar to the 2021 discovery AMP zone at WRCB, which also outcrops on surface. Appia is waiting on Magnet Ridge and Magnet Ridge West assay results to evaluate and analyze these exciting new zones.

Drilling on-trend and in-between WRCB and Magnet Ridge was also conducted, with 5 holes and 1,044 metres of drilling done, primarily at the Strocen prospect.

Keying off results in the WRCB-Magnet Ridge trend on the eastern limb of the large regional fold at Alces Lake, Appia conducted the first drilling program on the previously undrilled West Limb. Six holes with a total of 1,014.9 metres were drilled and encountered indications of elevated radioactivity. Lastly, drilling of five holes was conducted on the Western Anomaly. Following up on the 2021 assay results for this new exploration area, two holes (393 metres) were drilled at Sweet Chili Heat, two holes (393 metres) at Diablo and one hole (166.5 metres) at Buffalo. Mineralization was encountered in all three target areas and assay results will be analyzed and evaluated once received, however it is clear that more work needs to be done to better understand these accumulations of rare earth elements.

Alongside the record Alces Lake drill program Appia conducted a prospecting and sampling program to continue evaluating the properties extensive inventory of radiometric anomalies. Some of the 2022 drilling, notably the West Limb, came about as a result of the field work done early in the 2022 season as shown in Figure 2 below.

Following the results of the 2021 aerial geophysics survey, Appia more than doubled the acreage of the Alces Lake claims blocks. Appia is about to embark on a total 4,864 line km of high resolution radiometric and aeromagnetic surveys over three unsurveyed sections of the Alces Lake block. The northwest portion of the block has a planned 2,152 line km, the south portion of the block will have 2,487 line km surveyed and the eastern side of the claims block will have an additional 225 line km collected. The aerial surveys are expected to be completed in August 2022, weather permitting.

Appia also expects to provide an update in the near future on plans for the 2022/23 uranium exploration program on the claims blocks located on the eastern edge of the Athabasca Basin.

As previously disclosed, Appia is working towards a maiden resource estimate for the area. Industry delays through 2021 continue into 2022 for receipt of assay results. Appia has engaged the services of a second assay lab to process the increased volume of samples that were generated by the 2022 drilling program. It is expected that the maiden resources estimate will initially be for the WRCB and Magnet Ridge areas. Timing of the report has yet to be determined but is likely closer to the end of Q1/2023, depending on industry activity.

Appia’s 2022 drilling program at Alces was designed to drill significantly deeper holes compared to the 100 holes (approximately 8,076 metres) drilled in 2021 to allow Appia to determine continuity at depth and along the identified REE mineralization trends as the company works towards a maiden resource estimate to be prepared in accordance with NI 43-101 for the area. With high-grade REE mineralization now identified in many locations within an area covering approximately 27 km2 of the Alces Lake block, the Company believes the project has the potential to be a world-class source of high-grade critical rare earth bearing monazite.

The new S&P/TSX Battery Metals Index – what were they thinking?

InvestorIntel Corp. is pleased to announce the appointment of Stephen Lautens as its new Director. He will continue to serve […]

Tapping his toes to silver, Ecclestone hums the 3 P’s from the old school mining hymnbook

New silver mines appearing on the scene are not a daily occurrence or even a regular happening. The silver price […]

Testing Time (and Miracles) Required for the Inflation Reduction Act to Achieve Goals — plus, InvestorIntel’s Week in Review for August 1-7, 2022

Anyone who knows me, appreciates that I have a penchant for time. To me, time is the greatest tool for […]