Appia now holds a total of 69,344 hectares (171,351 acres) of land on four uranium claims (Otherside, Eastside, North Wollaston and Loranger) as shown in Figure 1 below. Appia recently completed 925 line kilometres of airborne radiometric survey over North Wollaston and an additional 379 line kilometres of airborne radiometrics over Loranger to supplement the existing database on these properties. Additional VTEMTM (Versatile Time Domain Electromagnetic) surveys over both the North Wollaston and Loranger properties were commenced late in 2021 but have not yet been completed. 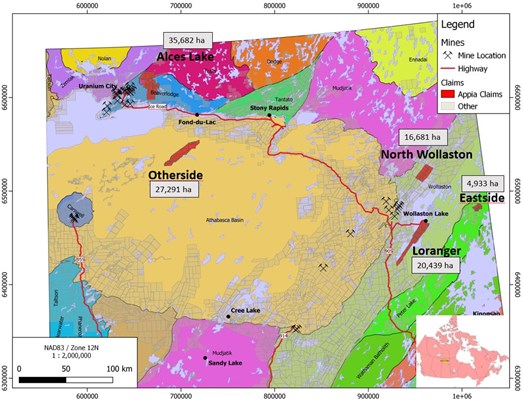 Appia has commenced the permitting process for a winter drilling program on the Loranger property and anticipates commencement of drilling in approximately one month, depending on weather and permits. The Company is fully funded for this program.

Appia recently provided an update on the 2021 exploration program in which the Company drilled a total of 100 core holes and collected approximately 8,075 metres of diamond drill core. Initial assay results from the Wilson North and Richards drill holes were announced on November 19, 2021 and confirmed some of the highest recorded rare earth grades discovered to date on the Alces Lake property. In addition, high-grade REE mineralization has now been identified throughout an area covering approximately 27 km2 of the Alces Lake block. Initial assay results have been returned from channel and grab samples but the Company is still awaiting further drilling core and channel sample assay results from the 2021 program.

With the largest exploration and diamond drilling program in the Company’s history this past year, exploration results will be released as received and analyzed by the Company. Analysis of the summer exploration and drilling program will follow and may lead to the preparation of an NI 43-101 (Technical Report with 3D Geophysical-geological Models) report expected in early 2022. The Alces Lake project encompasses some of the highest-grade total and critical* REEs and gallium mineralization in the world, hosted within a number of surface and near-surface monazite occurrences that remain open at depth and along strike.

The Alces Lake project is located in northern Saskatchewan, the same provincial jurisdiction that is developing a “first-of-its-kind” rare earth processing facility in Canada (currently under construction by the Saskatchewan Research Council, with the Monazite Processing Unit scheduled to become operational in early 2023). The Alces Lake project area is 35,682 hectares (88,173 acres) in size and is 100% owned by Appia.

Appia is a Canadian publicly-listed company in the uranium and rare earth element sectors. The Company is currently focusing on delineating high-grade critical rare earth elements, gallium and uranium on the Alces Lake property, as well as exploring for high-grade uranium in the prolific Athabasca Basin on its Otherside, Loranger, North Wollaston, and Eastside properties. The Company holds the surface rights to exploration for 105,026 hectares (259,525 acres) in Saskatchewan. The Company also has a 100% interest in 12,545 hectares (31,000 acres), with rare earth element and uranium deposits over five mineralized zones in the Elliot Lake Camp, Ontario.