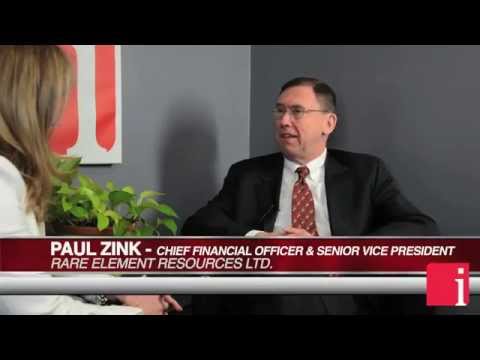 April 10, 2015 — Paul Zink, CFO and Senior Vice President of Rare Element Resources Ltd. (TSX: RES | NYSE MKT: REE) in an interview with Tracy Weslosky, Publisher for InvestorIntel discuss the strong stock uptick and how they been able to advance this world class resource and maintain a good balance sheet. Paul starts by crediting the “great team” and the “critical rare earths”.

Tracy Weslosky: Paul, I’m so happy to have you here because I get to ask you the most pertinent and critical question of the month which is, how did you get Rare Element Resources to move the stock up 177%?

Paul Zink: Well, we enjoyed floating up with all the other boats in the tide, but we’ve been doing a lot of work with investor outreach and getting the story out and I think it may have paid some dividends this time.

Tracy Weslosky: Well, as much as I appreciate that interpretation of how you achieved it, I think maybe it had more to do with the demand coming out of China for projects with dysprosium and terbium. Do you think that had anything to do with it?

Paul Zink: What we do think is that we have one of the best projects out there and certainly all the news we hear is that the Chinese measures to consolidate the industry to manage their environmental impacts and so on are paying off and that illegal mining is falling and that is helping the price, the supply situation therefore prices.

Tracy Weslosky: Let me take it a step further. We’re also getting confirmation of the Chinese planning on stockpiling the same heavy rare earths, the ones utilized for permanent magnets. If you don’t know the Rare Element Resources story, you’re the person to talk to. Would you mind giving us a quick overview on why so many people in the industry are looking at you as one of the top, if not the top, play to invest in?

Tracy Weslosky: Can you break it down a little further for us? Which heavy rare earths do you have because I know a year ago we were trying to reeducate some people in the audience that did not understand that you were not just a light rare earth play — you actually are a heavy rare earth supplier potentially in the future.

Paul Zink: We like to think of ourselves as critical rare earths, which includes some lights, some heavies, mainly the lights that go into magnets and then dysprosium in particular Some people— even though it’s a mid rare earth, I think, generally considered or even light. Europium is considered one of the criticals and some people see that as a heavy. We’ve got maybe the second highest grade europium deposit in the world. With the dysprosium that’s there, and in one of our satellite deposits it’s as high a grade as several of the so-called heavy rare earth deposits out there, we’re fortunate to have just a great concentration of the rare earths, great distribution…to access the rest of the interview, click here