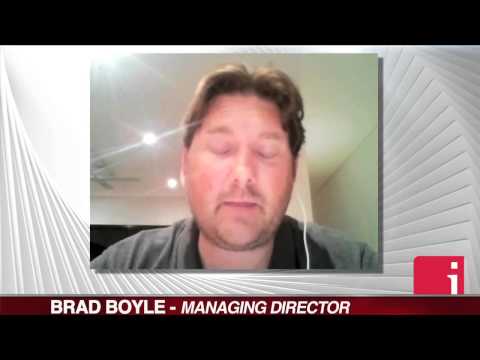 October 31, 2014 — Tracy Weslosky, Editor-in-Chief and Publisher of InvestorIntel speaks to Brad Boyle, Managing Director for Triton Minerals (‘Triton’, ASX: TON) about its October 21 maiden JORC compliant mineral resource announcement that its Nicanda Hill graphite deposit at the Balama North project in Mozambique may well be “the largest graphite-vanadium deposit in the world at nearly 1.5 billion tons” at an average grade of 10.7% graphitic carbon (gc) and 0.27% vanadium pentoxide. Not only is the resource the largest in the world, it is also of the highest quality. The fact that all of this happened within six months after the start of drilling at Nicanda Hill is one of the most remarkable aspects, which suggests that Triton is moving very fast – ahead of schedule. Triton’s market capitalization is also very high and believed to be one of the very highest in the world at over 100 million.

Brad says that Triton is moving as fast as possible, and will do so straight through the Christmas holiday period, toward completing a pre-feasibility study, which will be followed shortly thereafter a the full feasibility report. Brad adds: “if all goes well we’re looking at a production start date of maybe 2017.” To those that actually understand graphite and vanadium from a technical standpoint, as Tracy asks, Brad explains that given the 1.5 billion tons of mineral, the resource “must contain at least 156 million tons of pure graphite and nearly four million tons of vanadium pentoxide.” The deposit is spread out across a long and wide area (6 km by 1 km), which spoils the Triton for choice when it comes to choosing the drill zones: there are dozens of potential good ones. One of the areas in consideration is a hydrothermal region known as the Mutola Zone, featuring a high consistency of tonnage and graphite grade at, and near, the surface; it is some 30 meters thick with mineralization that is clearly identifiable along the entire strike length. Triton, therefore, has the luxury of being able to identify and strike only the higher grade graphite and vanadium zones within the Mutola zone: clearly, this keeps costs low.

Triton started the project as an exploration program and due to the quality of the “results over the footprint, it has turned very quickly into a resource definition exercise: “we covered a lot of ground and, as you can imagine, that footprint being nearly 5.2 square kilometres is a huge area and we’re fortunate that the mineralization we found was consistent with along the surface and at depth and it’s a rare thing to have that in any sort of deposit….We can see a consistency that we can project over a number of kilometres… And of course for us to find a larger elephant right beside another elephant, being Syrah Resources, is really an amazing thing.” Indeed, Triton’s property sits right beside Syrah, which was dethroned by Triton as having the largest graphite resource in the world – Triton has caught up! So, Triton, in six months has gone from junior explorer to no. 1 in the world. Triton also benefits from the availability of pre-existing and excellent infrastructure from the presence of a large port just 200 km. away to access to electricity and good roads…

Disclaimer: Triton Minerals is an advertorial member of InvestorIntel