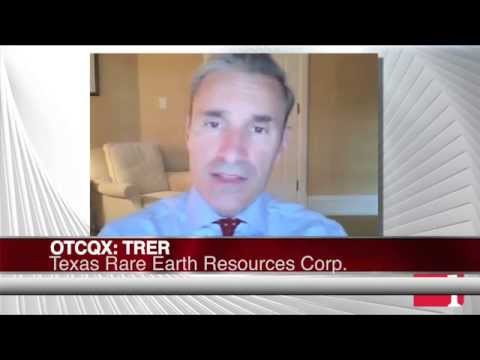 July 18, 2014 — Tracy Weslosky, Editor-in-Chief and Publisher of Investor Intel speaks to Anthony Marchese, Chairman of Texas Rare Earth Resources Corp. (‘TRER’, OTCQX: TRER) about the state of Molycorp as well as TRER’s world class deposit (including beryllium and a 70% heavy rare earth concentration)  with outstanding infrastructure in Texas at the Round Top rare earth minerals project.

Anthony suggests that as Molycorp’s share price continues its steady decline, in the last several days there have been many rumors that “there are entities that are acquiring Molycorp’s bonds in the expectation that the Company will experience a significant restructuring, which will allow these ‘entities’ to eventually control the Company. Anthony says that as rough as it has been for Molycorp investors, it may yet get worse.  Yet, many professionals in the investment sector still associates the entire rare earths industry with Molycorp. “So my concern is that those who follow Molycorp believe that somehow Molycorp’s price movement and problems are endemic to the entire industry. And this is not the case.”

Molycorp is concentrating on light rare earths, while China, which could supply the world with large quantities of light rare earths, is starting to look for heavy rare earths around the world and especially in Australia. Tracy points out that even as she and Jack Lifton had already seen the heavy vs. light rare earths demand dynamic taking shape five years ago: “most people don’t understand the complexities while Molycorp presented itself as having heavies. Anthony says that Molycorp’s heavies are actually extracted in China. “I believe that Mountain Pass in California does not have heavies.”

Anthony talks about the election of noted rare earths industry expert Jack Lifton to its Board of Directors last September. Jack has been ‘a very independent thinker’ and very influential in forming TRER’s strategy. TRER’s deposit shows a very clear mineralogical pattern which has proven to be heap leachable, which is similar to what might be found in China. As a result, TRER is looking for a strategic partner in its next phase of development. Nick Pingitore, a geologist at the University of Texas, and a Board member, is the architect of the heap leach processing approach. TRER’s land and the China clay deposits are the only REE deposits in the world to use  simple heap leach processing. Anthony says that TRER will have more announcements about the metallurgy in the near future and that they are making tremendous strides in this area. Ultimately, TRER is also about low CAPEX and significant profitability. Texas Rare Earth Resources’ revised CAPEX was reduced from $2.1 billion to approximately $293 million, among the world’s lowest -cost REE projects.

“We have three significant things that set us apart. The first is our Mt Weld resource which is recognized as […]