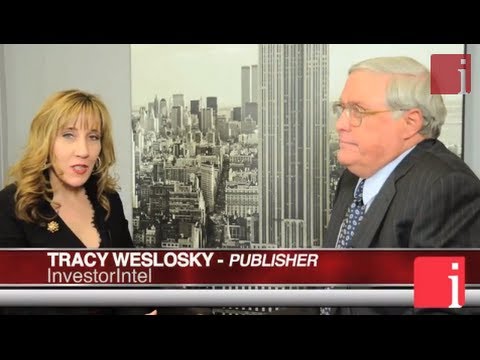 April 4, 2014 — Randy Scott, President and CEO of Rare Element Resources (‘RER’, TSX: RES | NYSE MKT: REE) speaks to Tracy Weslosky, Editor-in-Chief and Publisher of InvestorIntel, about what we should expect in 2014 from Rare Element Resources. Randy says that “2014, based on the accomplishments of 2013, is shaping up to be a very important year for us. We have plans to start our final feasibility study. We’re updating all the information that we’ve collected from a number of different tests, resource estimates and engineering estimates that we’ve been doing. So in 2014, I think the key items for us will be starting the feasibility study as well as getting our product from the pilot plant tests in the hands of potential customers for evaluation.”

Randy also addresses the issue of resource sustainability in the United States and whether or not there are changes on the way. He says that RER has had a formal program underway for the past three years “in which we’ve engaged the local communities as well as state legislatures, the state community in Wyoming and even individuals at the federal level.” He went on to say, “At the federal level….there have been a lot of studies done but not that much tangible comes out of those studies except for a growing recognition of the importance of rare earths.” Randy mentions the example of the F-35 jet fighter program, and how it has propelled rare earths back to the top of people’s agenda. The US Government Accountability Office, in fact, has launched an investigation into the Pentagon’s waiver of laws banning the use of Chinese-built components, in this case magnets, in US weapon systems.  These waivers occurred in order to keep the Lockheed Martin F-35 fighter program from falling further behind schedule. All this occurred while the US military expressed outraged over allegations of Chinese military-industrial espionage.

Randy says that one of RER’s advantages is its location in Wyoming.  The Company enjoys strong support from the community and the State, which is crucial as the Company moves through the permitting process: “It’s a fabulous place.  We have great support in Wyoming. We have moved into the permitting process now.  That is a key milestone that should indicate to everybody how much progress we have made, where we are and where will be in another two or three years.”

Some rare earth industry detractors have argued that there should be no need for additional rare earth processing in North America and that Molycorp, the one active processor today, can stand alone.  Randy says that “Molycorp is going to be a fabulous addition to the industry, and we’re looking forward to the time when they are very successful…as that would be great for the industry.”  He went on to say that he sees every indication that demand is going to grow and expects that in the next few years “…when the Company’s mine starts to produce meaningful quantities of rare earths, all the forecasts that we’ve seen indicate that demand is going to continue to grow, especially for magnet materials and heavy rare earths.” In that respect, RER will benefit from the fact that its Bear Lodge project is heavily skewed in favor of critical rare earths, “so when we look at the future, we think it looks pretty bright,” says Randy.

As for the important issue of rare earth processing, Randy says that the results of RER’s pilot plant test work and its ability to deliver a 97% + pure rare earth concentrate, results in “a highly desirable product for off-take partners or for processing partnerships and the material is already being tested by the market.” As for downstream processing, Randy suggests that the quality of the Company’s concentrate “offers serious advantages to a downstream processor” and added, “When we think about that, we ask ourselves whether our shareholders ought not to be able capture some of that downstream value. So we have said, and the Board has agreed, that we will evaluate the possibility of separating our product ourselves.” He said that such a facility could potentially be based in Wyoming, but cautioned that the idea is still being evaluated and more technical and economic work will be done in the next few months.  Finally, Randy offers his opinion on where rare earth prices are headed. His long experience in the metals industry tells him that “everything cycles.” He says he is optimistic that we may well “have seen the bottom of rare earth pricing” and expects the market will continue to search for equilibrium.

In a recent InvestorIntel interview, Tracy Weslosky spoke with Chris Thompson, President of eResearch Corp. about his 14-page Update Report […]