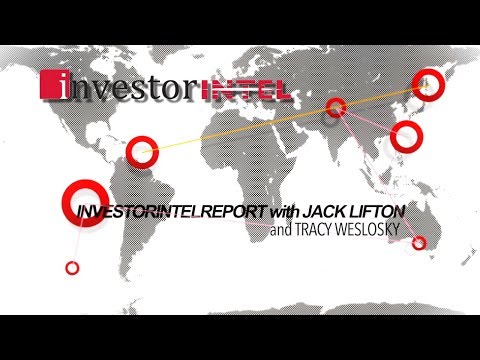 On this holiday weekend, I thought I would extend a complimentary viewing of the Lifton & Weslosky Technology Metal Report, a special weekly video that is published on InvestorIntelReport for members every Wednesday.

Jack was in Toronto on Wednesday and Thursday, and during lunch he explained that he preferred the term “Intelligence” — so the name InvestorIntelReport may be a placeholder, but moving forward we will be producing this video weekly for publication on our InvestorIntelReport only. And please, for those that are not in love with this formula appreciate that all of the content you find on InvestorIntel is all-original and is all-paid for. In fact, we are one of the few online companies in the world that actually pay for content. More and more, major online media sites woo great writers and talent with the opportunity for exposure. Well, for someone who was supposedly being distributed into 290 million households for 3 years with a  TV series I co-owned, I can tell you that PR is just that — publicity.

So like us, love us or hate us, please appreciate that we hire the top industry specialists and we want to pay them what they are worth. So for today, please enjoy your Easter weekend ‘freebie’. My mother always told me that Easter was a new beginning, a chance to start the year off anew. Well, whatever your religious or spiritual commitments are, I think this is an especially nice idea, so here’s to the start of something wonderful.

Now for the Lifton & Weslosky Technology Metals Report, we discuss the recently established Baotou Rare Earths Products Exchange or the rare earth stock exchange. The Chinese government has taken this unusual step in conjunction with efforts by China’s State Bureau of Material Reserve (SBMR) to proceed with a new round of rare earth stockpiling…and of course, I draw your attention to First European Metals that is already providing this service. Speaking of this, Founder Iain Macpherson sent me a quote via Skype a day or two ago with: “FEM is continuing to increase its foothold as being a European source for REE and strategic metals which is being financed by their individual investors of the physical metals.” — Jack and I see the Chinese getting into this market aggressively, and FEM is showing entrepreneurial fortitude by already being there.

Jack suggests the Chinese are very new to this, calling the current effort “baby steps”, and again — noting that the entire concept is very new. Further observing: “It’s a good start, but I’m not sure that it’s anything more than an academic exercise at this point.”  Nonetheless, I comment that this is a good signal for investors that the technology metals market is expanding. And just for the record, if I could get Charles Lew from Hastings Rare Metals on camera — everyone would be a believer. Charles understands that the smog in China is more than a driver for electric cars and that the Asian market will drive the technology metals market, and a smart investor has rare earths and other technology metals such as lithium, graphite, cobalt and tin: in their portfolio.

Other topics included Great Western Minerals signing a Memorandum of Understanding (MOU) for rare earth services. Jack offers a very cautious response in that the MOU is not very clear about exactly what kind of services are included under the MOU: “I’d like to know a lot more about what services they are discussing….” I share some of Jack’s concerns, noting that the press release fails to mention any detail about the identity of the other party in the MOU and wish Marc would come back on board and deliver an update to our audience as GWMG’s “stock fans” have quite the team.

Peter Cashin, CEO of Quest Rare Minerals (‘Quest’, TSXE: QRM | NYSE MKT: QRM) hosted a General Meeting in Montreal last week after delivering a very important announcement related to an improved Preliminary Economic Assessment (PEA) indicating a one billion dollar cost reduction. Jack notes, however, that the overall project still costs well over a billion dollars. He warns that “anybody looking for a billion dollars is standing in a short line and on the edge of a cliff….I would say that Quest’s number one problem is raising that kind of money in this market or the market in the near term…and I also noticed that their PEA shows they would be in operation until 2019 perhaps 2020; so it’s hard to factor anything like that into estimates of future supply and demand.” In contrast, I observe that the recently elected Liberal government in Quebec is very good news for Quest, as it should resume the kind of support to the resource sector that has made Quebec such a desirable mining destination. I would be willing to wager that Peter has investment suitors that are seriously reviewing…Quebec is the dark horse in this sector.

Jack seems more optimistic about Tasman Metals (“Tasman”, TSXV: TSM | NYSE MKT: TAS), which recently released the pre-feasibility study for the Norra Karr project in Sweden. In face he is “very impressed by the fact that Tasman has been able to raise money in this market and I am urging people to look at those who are able to raise money….Tasman is surely Europe’s best hope to be independent and Tasman has to be brought into operation or Europe will become a second rate place and Europeans don’t want that to happen.” Similarly, I point out that Ucore Rare Metals (TSXV: UCU | OTCQX: UURAF) and Geomega Resources (TSXV: GMA) also announced successful fund raising efforts, which would indicate that we might be witnessing a turnaround in the rare earths market. Without disputing the turnaround possibility, Jack thinks that what is actually happening is that “investors are selecting the winners.” Speaking of winners, Tasman Metals Ltd. TSXV: TSM was up +16.30% and their NYSE MKT: TAS up +13.82% for last week.

Jack adds, taking a cue from his recently published and very popular article on InvestorIntel,  that many companies will be hiring Solvay SA’s division in La Rochelle, France, for their toll refining needs: “Solvay is clearly the world’s leading rare earths separation company, there’s no question about it. But Solvay has a limit to what it can do; it’s not an infinite well of largesse or technology; we have to watch, who first becomes a supplier to Solvay….Unless somebody else builds a world-class separation facility with 45 years of experience, anytime soon,  Solvay like the market is helping us pick winners.” (and InvestorIntelReport members can hear Jack’s incredible commentary on the French rare earths market if you go to the site).

We discuss graphene and comment on the appointment of Thomas H. Cruikshank, former CEO of Halliburton, as a strategic advisor to one of the most promising graphene companies Grafoid Inc. In part because I found that to be one of the most intriguing announcements of the week and as Focus Graphite (TSXV: FMS | OTCQX: FCSMF) is a shareholder — Focus is one of those companies as Jack states that is “pulling itself from the herd; it’s obvious to me that we’re seeing winners.”

Jack ends the discussion by noting some of his forthcoming speaking engagements, the first of which will be SIMEXMIN in Belo Horizonte, Brazil (May 11-14), which is very important considering South America’s expanding role and interest in rare earths. This is where I would like to remind everyone that Largo Resources Ltd. (TSXV: LGO) is a new InvestorIntel member has an advanced stage vanadium property that is counting down to production in the next couple of weeks — and is located in Brazil. We have Luisa Moreno coming in on Tuesday to discuss the competitive landscape of vanadium, so this should be quite the exciting week to kick off the new year.