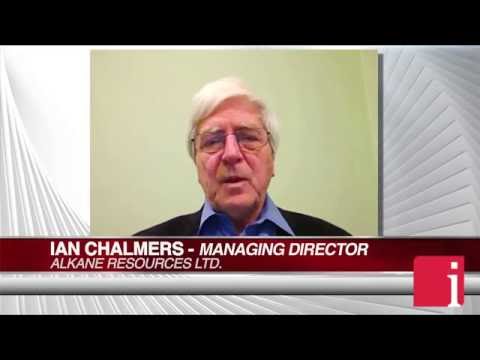 September 12, 2016 — Ian Chalmers, Managing Director of Alkane Resources Limited (ASX: ALK | OTCQX: ANLKY), in an interview with InvestorIntel Sr. Editor Fred Cowans discuss Alkane’s marketing deal with Minchem for all zirconium materials produced by the Dubbo Zirconia Project, to which the market responded very enthusiastically. In this interview Ian explains how they have derisked the flowsheet to such an extent that it will work in a full-scale commercial plant. They also discuss Alkane’s JV with Vietnam Rare Earths in Vietnam to produce the full spectrum of rare earths to high specification.

Fred Cowans: You just recently put out some news of a deal on zirconium marketing with Minchem in the U.K. The market responded very enthusiastically. Let’s talk about the DZP project, the Dubbo Zirconia Project and how much zirconia you intend to produce there.

Ian Chalmers: Sure Fred. Yeah, you’re right. It was a pleasing response because we actually put out a couple of quite decent announcements in the previous six months and got no market response so for zirconia it was great. We produce about 16,000 tons a year of zirconia, which really means zirconia oxide and zirconia chemicals. It’s the bulk of the volume of the project that we will produce. In terms of revenue though, it’s about 30% so important, but not the dominant output.

Ian Chalmers: We can produce all the rare earths so run the full spectrum through lanthanum through lutetium and yttrium. It’s important, but in terms of revenue, again, the key ones are the magnet materials, like neodymium, praseodymium, dysprosium and terbium. They really do dominate the rare earth revenue part of the project. Other ones, lanthanum, cerium — but right now the price is so low that it’s almost not worth producing those. We’ll focus on the key revenue generators.

Fred Cowans: I understand the current quarter Ian that you’re going to be operating a pilot plant there. Is that to show your flowchart actually do work or is it also to demonstrate to your potential buyers what your products will be?

Ian Chalmers: Fred, the pilot plant’s really been operating now coming up to 9 years. Really the length of that time has been to optimize, to derisk it and this current run is as combination of all of that work over many, many years. We think we’ve now derisked the flowsheet to such an extent that it will work in a full-scale commercial plant. We made some modifications and adjustments to the pilot plant for this run, but the other really big driver is to produce products. We’ve got a number of products. We will produce all products this time around, get them out to the customers, get the customers to look at them, decide whether this is what they will buy or if there are any issues we need to get back and relook at what we need to do to produce that material that our customer wants to buy. As you’re probably aware when you’re dealing in these, sort of, exotic metals sweets, the customer drives the demand. The customer decides the purity, the particle morphology, all of these things, which are very important when you start generating science.

Fred Cowans: When you actually get into commercial production you’re not going to be doing the production. I think you’ve got the beginnings of an LOI in place with a Vietnamese company. How important is that?

Ian Chalmers: It’s very important Fred. Basically we decided many years ago that we would only produce a rare earth concentrate on site. The reason for that is we were trying out to minimize the risk of going into a commercial technically complex rare earth separation plant knowing full well that we could produce the whole spectrum of rare earths. We looked around for different opportunities and finally settled on Vietnam Rare Earths in Vietnam, an interesting company run by a very entrepreneurial gentlemen. Basically that plant’s been operating since 2012. It can produce all the rare earths. It can produce them to high specification and it’s already selling product into Japan…. to access the complete interview, click here

Disclaimer: Alkane Resources Limited is an investor relations client of InvestorIntel Corp., which owns InvestorIntel.com. For more information contact us at +1 647 345 5486 or info@investorintel.com.