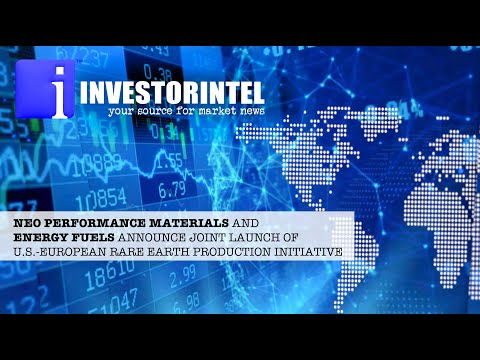 A milestone in the race to return America and the West to having a totally domestic rare earth enabled products supply chain was achieved and announced yesterday. Clean mixed (of interfering ions and radionuclides {uranium and thorium}) rare earth carbonates were agreed to be produced commercially by Energy Fuels Inc. (NYSE American: UUUU | TSX: EFR) in the next quarter, from domestic (American) monazite sources and sold to Neo Performance Materials Inc. (TSX: NEO), which will separate them in its European facility and either convert the oxides to metals and alloys and rare earth permanent magnets itself all outside of China or sell the separated oxides to European metal, alloy, and magnet makers. All of these events have come about without any government subsidies or contracts!

Even more heartening, I have been told by the parties to the agreement that the carbonates are being produced profitably and that the customer is paying a competitive price.

Of note is the fact that the capital intensity efficiency of Energy Fuels has set a very high bar for its domestic competitors. Energy Fuels spent less than $2,000,000 to modify its White Mesa Uranium Mill in Utah (the only licensed facility of its type in the USA) to process up to 2,500 tons per year of monazite into clean mixed rare earth carbonates. This is probably just 10% or less of what it cost Lynas to achieve the same quality of output of mixed carbonates in Malaysia on a per ton basis. MP Materials has yet to achieve this milestone at Mountain Pass.

Energy Fuels has announced that it is planning to go downstream in the rare earths supply chain so as to create a domestic American total rare earth supply chain. My hat’s off to its dynamic management and staff, which apparently did not know that recovering rare earths free of radionuclides from monazite and producing a clean mixed rare earth carbonate was not possible competitively in the USA.

The operational domestic American rare earth industry is on its way back.

I wonder when Washington, DC, will take notice of this?