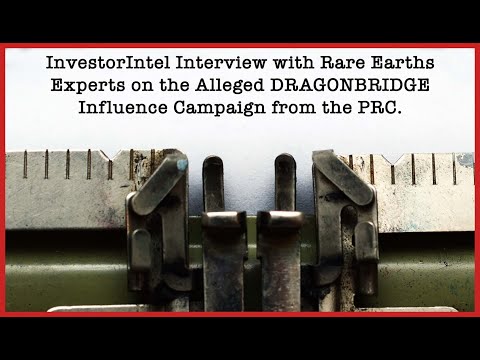 While the story has been picked up by mainstream and industry media, a deeper dive makes it look increasingly unlikely that this “campaign” was, as claimed, part of a Chinese effort to undermine foreign attempts to develop a rare earths processing capability outside of China and maintain China’s current dominance. While China makes a good James Bond villain in western politics and the popular press, a look at the evidence doesn’t necessarily point in their direction as the main movers in this case. For people familiar with online campaigns, this one attributed to China’s influence campaign known as DRAGONBRIDGE seems particularly weak and unfocused. The campaign and its associated hashtags never trended on Twitter, which is unfortunately all too easy to do with modern botfarms and technology.

Some tweets came out of China or were posted in Chinese, but that doesn’t a conspiracy make. A look at the tweets indicates some of them came from newly-created, zero-follower accounts, which is not the way to get something trending. China has much greater cyberwarfare capabilities than shown in this example. If anything, it is more reminiscent of anti-mining environmental activist campaigns that are a part of life for many mining companies. These can be co-ordinated by small but dedicated groups of activists unhappy with a company’s environmental or human rights records, real or perceived. In order to rise above the noise of social media, they often use multiple accounts and contacts with other groups to look larger than they are to increase their influence. The brief online campaign against Lynas – especially tweets from Malaysia where Lynas has a rare earths plant – looks far more like that than it does a co-ordinated attack by the Chinese cybersecurity forces.

Could the Chinese government have paid brief attention and contributed a few gratuitous kicks to a social media campaign that gave Lynas a poke? Possibly. We know that for years Russia has waged a disruptive social media war in the US and other western countries simply to make trouble, often working both sides of an issue to cause instability. The media has breathlessly connected the dots between China and the recent announcement that the US Department of Defense is increasing funding of Lynas’s rare earths facility in Texas. It is hard to believe that the Chinese cyberwarfare establishment thinks that they can undo $120 million in strategic funding by the DoD with a few tweets.

“Cui bono?” – Who benefits? That was the question Roman judge Lucius Cassius asked in difficult cases. The benefit to China is negligible to non-existent. The West will continue to search for domestic rare earths and develop processing facilities. Will some company, analyst or investor group benefit from an attempt at bad press or stock slippage? Or is it a social media campaign by a handful unhappy activists groups that jump on an anti-mining bandwagon that ultimately goes nowhere, even with a couple of half-hearted contributions from China?

And unless you think that I am naïve, I worked on Chinese projects with Chinese partners for over a decade. China has – to say the least – a unique way of doing business. We have seen them attempt to exert influence to gain economic advantage around the world, however I have seen Connecticut hedge funds do the same and worse. But these kinds of campaigns out of China – like the brutal one to release Meng Wanzhou, the CFO for Chinese telecom giant Huawei, that included taking Canadian hostages in addition to a social media campaign – are waged skillfully and with a purpose. It is hard to see any of that skill or purpose in this case.

Stephen Lautens is the Editor-in-Chief, Publisher and Director for InvestorIntel Corp. and has extensive experience as a mining executive, consultant, and general counsel, in roles ... <Read more about Stephen Lautens>