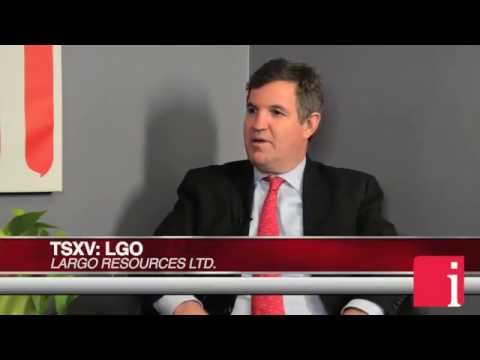 Brennan on Largo’s debt repayment, the vanadium market and the ramp up towards being the #1 global market supplier

February 27, 2015 — Tracy Weslosky, Publisher of InvestorIntel speaks to Mark Brennan, President, CEO and Director of Largo Resources Ltd. (TSXV: LGO) on debt repayment, the vanadium market and how this project “can still make a lot of money at $5 vanadium.”

Tracy Weslosky: Mark, I love vanadium. Largo Resources, of course, is not just an advanced stage play. You are a production play, correct?

Mark Brennan: We are a production play.

Tracy Weslosky: But, recently, of course, the share prices have been hit. Can you talk to us a little bit about what’s happening?

Mark Brennan: Sure. I think the biggest concern that the market has right now is with our debt. What we’re looking at is we’re starting the repayment of our debt starting in May. I think people are concerned about the schedule about the repayment of the debt. Now we’re able to work with the banks and roll over our debt. We’re working with the banks now and we believe we’re going to be able to roll over the debt again. We have every confidence that the banks are working with us. They’re very supportive of the project. They’re very supportive of everything that’s going on. I expect that we’ll see a resolution in the not too distant future.

Tracy Weslosky: Of course, this is a producer. You have end-user agreements in place with Glencore. How did this happen? I mean, was it the price of vanadium? I mean, you’re still economical based on the numbers I’m looking at.

Mark Brennan: We’ve seen vanadium fall probably by about 25% to 30% in the last year. Basically we’re in the ramp up phase. Pricing coming down was not something that was an optimal situation for us. That said, this project remains very profitable even at the levels where the commodity price is trading today. What we need to do is we need to readjust the environment that we have, you know, for the project. $5 vanadium; this project can still make a lot of money at $5 vanadium. We’re just readjusting what we’re doing now to make sure that happens. As we discussed, the cost of our production is running around — is targeted to be about $2.50. Even still with a very, very bad commodity price our expectation is to have 150% margins.

Tracy Weslosky: Our science editor just wrote recently that there is a 6.5% compound interest growth for vanadium demand in steel. Is this correct?

Mark Brennan: Vanadium growth is still very strong. Largely as a consequence of the fact that you’re seeing vanadium being used in a multitude of new products. That’ll continue. We’re only at the beginning of that phase. The highest growing segment of the steel industry is the high-strength low-alloy steels, which is where vanadium sits and is perfectly primed for that position. We’re just at the beginning of a strong growth phase for vanadium.

Tracy Weslosky: So, in addition to maybe just, you know, being hit by vanadium prices being lowered, you’re still economical. You’re handling it with the banks. When do you see a resolution happening? To access the rest of the interview, click here

Disclaimer: Largo Resources is an advertorial member of InvestorIntel.