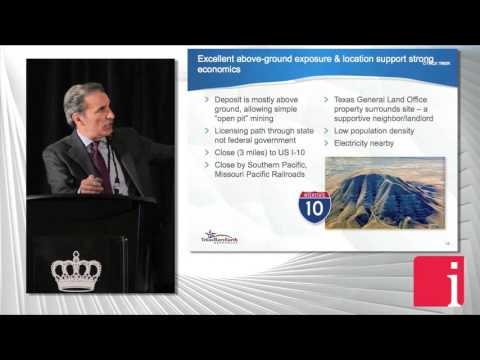 Watch Anthony Marchese, Chairman of Texas Rare Earth Resources Corp. (OTCQX: TRER) present being one of the lowest cost technology metal projects in the world during the InvestorIntel Technology Metals Summit on October 14, 2015 in Toronto. Explaining how the Texas Rare Earth Resources’ model is profitable “even today”, using internal Chinese prices, he explains how the project risk is mitigated by non-REE by-product opportunities. Probably of greatest interest to our audience, Anthony describes how the DLA contract both validates the project and provides potential major offtake potential.

Anthony Marchese: First of all, thank you Tracy for putting on the conference and allowing me to step in at the last second and describe Texas Rare Earth Resources. I’m going to go through this very quickly. It’s a much longer presentation than 10 minutes, but in any case the story of Texas Rare Earth Resources is quite simple. We are a massive low-grade deposit, highly economic, multi polymetallic rather, about 80 miles southeast of El Paso, Texas. We are near a major metropolitan area. Easy extraction, I think, even at today’s China economics. We’re still a very profitable, potentially profitable enterprise. We have 41 million shares outstanding, market cap ridiculously low at $9.1 million. We have a lot of skin in the game, insider ownership about 38%. Institutional ownership about 12% and a fair amount of float so there are plenty of shares to trade. Our PEA from several years ago, that will come down as a result of our association with K-Technologies and I’ll let them talk about what they do. They’ll be presenting I guess later on. Originally we thought about $290 million, incredible economics; IRR of 67%. That was based at the time on China internal prices. Substituting China internal prices today, that number probably is in the mid-teens. It shows you how much it’s dropped, but still if you’re showing positive economics, I believe, in today’s environment then you have a reasonable chance of doing fairly well if you get into production. Enormous — That was based on a 20-year mine life. Realistically we have about 105-year mine life and that’s only the first of three mountains in the area, I’ll talk about that a little bit more, primarily heavy rare earths about 72%, in addition to a number of byproducts, which I’ll describe in a moment. Board of directors, Amanda probably knows Eric Noyrez, former CEO of Lynas, is on our board. Jack Lifton who is one of the featured moderators joined our board a couple of years ago. I don’t think there’s a day that goes by that I don’t speak to or email Jack several times a day. We have a working board. We are very active in managing the company. We have a lot of experience. Our project, again, 80 miles southeast of El Paso, Texas. I’ll describe. This is the deposit. This is the mountain. There’s no overburden. You come in, dig it out, we’ll be heap leaching it. And I’ll just talk about our contract with the Department of Defense in a moment, but we can sell our output 100 times over just to the defense industry. This is a very interesting study that no one ever mentions…to access the full presentation, click here