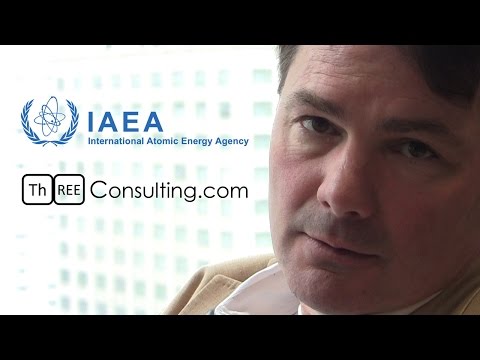 James Kennedy works closely with the Thorium Energy Alliance to promote US legislation for the commercial development of thorium energy systems and rare earths. And when he asked me to review a video where he presents a paper entitled “Creating a Multinational Platform, Thorium, Energy and Rare Earth Value Chain – a Global Imbalance in the Rare Earth Market” – it occurred to me that Tracy’s frequently referenced ‘800 lb. gorilla’ in the proverbial rare earth room was overdue for discussion: thorium.

Kennedy’s essential argument is that the rare earth imbalance is largely the result of regulations with unintended consequences: “Rare earths and thorium have become linked at the mineralogical and geopolitical level.” In other words, thorium should be considered as a rare earth mineral.

There is, in fact, a close relationship between thorium and rare earths; they often come together. In fact, monazite, was first mined to produce thorium and rather than rare earths. In the 19th century, thorium was used to make gas mantles. Later, with the development of technology that required rare earths to function, monazite started to be mined for elements other than thorium. Meanwhile, monazite itself is a by-product. It is separates easily, through gravity and at almost no cost, in the mining of titanium or zirconium, such that the monazite can be said to be produced practically free of charge. The United States was the leading supplier of monazite – which was in the main source of rare earths – in the first decades of the rare earths industry (the post WW2 period). Brazil was also an important supplier and China, ironically, tried to become a world supplier but failed to meet Western standards and “so they weren’t able to pursue it.” How ironic! However, in the 1980’s, international classification changes concerning thorium changed the way the market saw monazite.

The International Atomic Energy Association (IAEA) placed monazite in the category of source material. After representing the major source for the world’s rare earth supply, nobody wanted to deal with monazite any longer, wondering what to do with the residual thorium. The interesting aspect is that monazite was itself an almost zero cost by-product. And this is where and when China sneaks past the ‘Western” standards to begin its rare earths market dominance. China stepped in and took advantage, deciding that it would dominate the rare earth industry, which was understood to be critically important. Western companies that had mined monazite until that point, decided to abandon the industry. Mines were shut down simply for having thorium discharges in the tailings under pressure from environmental agencies and groups. Such is the context in which companies like Molycorp in the USA or Lynas Corp in Australia have put the West back into the contest for rare earth production; and what a costly contest it is proving to be, especially because neither one of these two companies has been able to produce even moderate quantities of the high-demand heavy rare earths (HREE) – this is very costly.

The two companies alone have invested some USD 6 billion and the proverbial ‘market’ has not been kind. In order to avoid the ever longer catalogue of liabilities and risks, the markets have promoted low thorium content projects rather than high-value rare earth distributions. In the case of Molycorp, says Kennedy, the “United States, very market-oriented, balanced its short-term return goals against the cost of developing its own value chain for what are just low-value rare earths.” Moreover, despite the goal to become a US based alternative to China, Molycorp has had to invest in China, where it processes the ore (ore that delivers low market value LREE’s). Lynas has gotten itself into a similar conundrum, shipping the ore for processing in Malaysia: and all of this just to avoid the thorium by-product. In order to confront the losses, high expenses and inability to deliver HREE’s, Lynas and Molycorp are trying to boost production to break even – they have already abandoned the notion of making a profit.

The Chinese have become very skilled at maximizing profit by rationalizing all aspects of the rare earths mining value chain. Kennedy stresses that “70% of China’s rare earths come from the by-product production from an iron ore mine,” while focusing on the high value elements, which suggests that if the West is really going to compete, it will have to re-focus its efforts on developing low-cost byproduct resources. In many cases these have high thorium content and “In the United States alone, thorium-bearing rare earth phosphates and other thorium-bearing mineralization could easily meet 50% percent of world demand for rare earths.” The high HREE yield monazites are abundant. Now,  mining operations worldwide are concerned with thorium content limits and across the United States and across the world take these valuable monazites and other thorium-bearing phosphate rare earths, which are often plowed back into the ground simply to ensure the mining company has not exceeded its threshold for thorium.

So, the actual cause of the West’s reliance on China for heavy rare earths is the thorium content conundrum. The Thorium Energy Alliance has been working on legislation that will fix this issue. There are currently two bills before the US Congress “that if enacted would create a federally-chartered multinational rare earth cooperative that’s privately funded and operated, and it would be authorized to accept monazites and other thorium-bearing minerals. The thorium would be removed and stored on what Kennedy calls a federally-chartered ‘thorium bank’ for safekeeping. This will help mining companies, which help place liability to the bank, leaving the miners to produce higher value HREE’s.