The geophysical/geochemical programs and results to date suggest that the WB target is an epithermal gold occurrence related to the Canada Wall (CW) copper/molybdenum/gold porphyry center 3.5 kilometres to the west. Both are within the same intrusive complex with CW in the north-center and WB on the eastern flank.

“This is consistent with recent work which shows that eastern Cambodia was subjected to two separate mountain building tectonic events resulting in two separate intrusive rock forming events both of which are conducive to porphyry copper-gold-molybdenum and associated epithermal gold formation,” stated Dennis Ouellette, VP of Exploration.

The next phase of Angkor’s work program will consist of a 10 line-kilometer Induced-Polarization (IP) survey in April. Compilation and interpretation of all data collected will then inform the Company on targeting an approximately 1,000 metre preliminary diamond drill program. 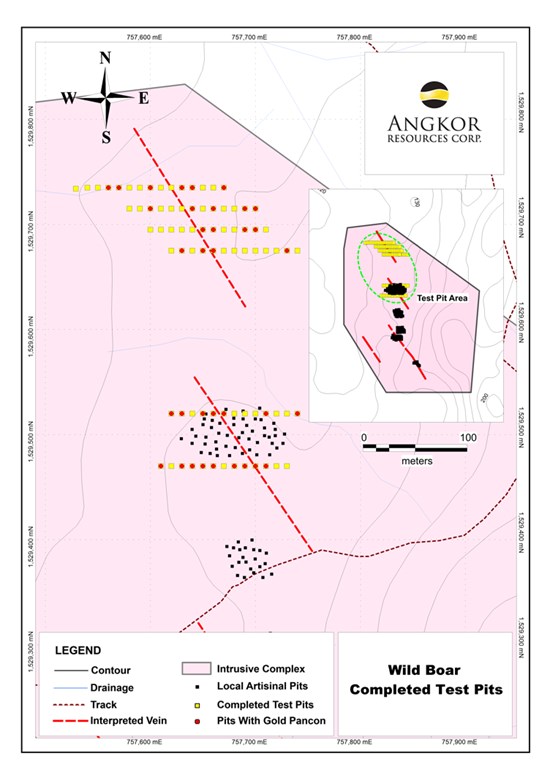 Eighty (80) test pits were completed on six lines on the northern portion of the Wild Boar prospect. It is very encouraging to note that 45% of the pits returned up to 15 gold grains with fine to medium grain sizes. The angular nature of some of the grains suggest a nearby source. The samples from the pits consisted of saprolite and weathered bedrock. Each sample was pan concentrated to determine the gold content. Most of the pits with gold also contained quartz vein material.

Several northeast trending and southeast shallow dipping quartz veins of up to 0.50 metres in width were uncovered from the test pits. Quartz veins exhibit massive to comb textures typical of an epithermal environment. These vein samples along with the weathered bedrock on each test pit have been submitted for gold and multi-element geochemistry.

Each line was spaced at 20 meters and the test pits at 10 meters. Test pits show alluvium/colluvium cover of up to 80 centimeters thick which is more likely the reason for the non-detection of geochemical signatures from previous soil sampling program amidst a number of gold-anomalous rock float samples discovered in the area.

The Wild Boar Prospect is located in the southeast area of the 100%-owned Andong Meas license, and portions of the area have seen intensive artisanal workings on several subparallel epithermal veins.

Angkor Resources Corp. is a public company, listed on the TSX-Venture Exchange, and is a leading mineral explorer in Cambodia with a large land package across four 100%-owned licenses and a fifth license under an earn-in agreement with a third party. In 2019, the company received approval to negotiate Production Sharing Contract (PSC) terms for Block VIII, a 7,300 square kilometre oil and gas license in Cambodia.