Zinc One Resources Inc. (TSXV: Z) (OTC Pink: ZZZOF) (FSE: RH33) (“Zinc One” or the “Company”) announces the first ever drill results have confirmed a new high-grade zinc mineralized zone at Mina Chica, which is one of several high-grade mineralized areas being targeted in the ongoing drill program at the Bongará Zinc Mine project located in north-central Peru. More importantly, these drill results penetrated as much as 16.5 metres of true vertical thickness with 36.5% zinc resulting in the base of mineralization at Mina Chica potentially being substantially deeper than previously contemplated. Zinc One anticipates that its new understanding of the high-grade Mina Chica mineralized zone will have a positive impact on the resource estimate at the Bongará Zinc Mine, which is anticipated to be released in Q2 2018.

To date, assays for only 6 of 34 holes drilled at Mina Chica have been received and are reported herein. Visual zinc mineralization has been noted in the other holes and assays will be announced when received and data has been compiled.

Mina Chica is only one of three known zones of high-grade near-surface zinc oxide mineralization along a 1.6 kilometre mineralized trend that will be tested by this drill program. At Bongarita, which lies approximately 200 metres west of Mina Chica, results from only 13 of the 36 holes drilled there have been reported. At Mina Grande Sur, which lies approximately 1.2 kilometres southeast of Mina Chica and where a second rig is currently drilling, results from only 11 of 54 holes drilled have been reported.

Sampling and Analytical ProtocolsJim Walchuck, President and CEO of Zinc One commented, “We are extremely pleased with the results from the first six drill holes at Mina Chica especially in the holes which generated greater thicknesses and depth than we were anticipating. These assays have expanded our expectations with respect to the true vertical thickness and thus the potential amount of the mineralization at Mina Chica. We look forward to receiving the data from the samples currently in the lab for the additional drill holes which we believe will continue this trend.”

The zinc mineralization at Bongará is hosted by carbonate rocks and is classified as a Mississippi Valley-type deposit. The mineralization is stratabound and is basically a tabular body with irregular boundaries. Hydrozincite, smithsonite, hemimorphite, and a zinc-aluminum-iron silicate are the primary zinc minerals that are hosted primarily by soils, heavily-weathered fractured and vuggy dolomites, and fine- to coarse-grained dolomites.

Significant results, including drill-hole orientation and total depths for Mina Chica, can be found in Table 1. Below is a map in Figure 1. outlining the ongoing drill program at Mina Chica. A link to additional maps showing a more detailed view of the surface/pit sampling and drilling at Bongará is also provided. 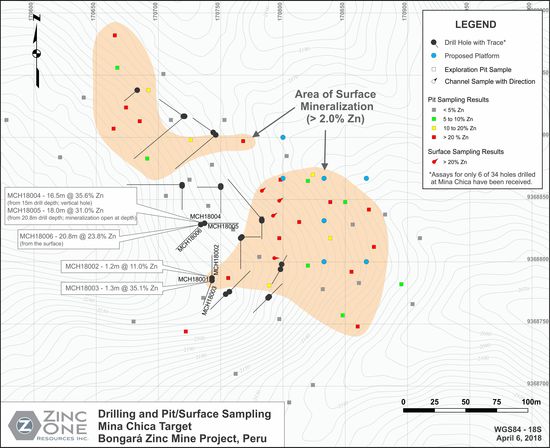 The sample from each core run is placed in a 60-centimetre long, plastic core box that has five columns. Core recovery, rock quality designation (“RQD”), and geologic features are logged and sample intervals, which are generally <2 metres, are chosen. Each core box is photographed and then sampled with a spatula (soil and heavily-weathered rock) or cut with a core saw, 50% of which is placed in a sample bag and stored on site in a secure location. The Company independently inserts certified control standards, blanks, and duplicates, all of which comprise approximately 30% of the sample batch, to monitor sample preparation and analytical quality. The samples are stored in a secure area until such time they are shipped to ALS laboratory in Lima (ISO 9001 Certified) for preparation and assay. At the laboratory, samples are dried, crushed, pulverized and then a four-acid digestion is applied. This is followed by the ICP-AES analytical technique for 33 elements, including lead. The same method is used to assay zinc for values up to 20%. If zinc exceeds 20%, it is then analyzed using a titration method. The laboratory also inserts blanks and standards as well as including duplicate analyses.

Information set forth in this news release contains forward-looking statements that are based on assumptions as of the date of this news release. These statements reflect management’s current estimates, beliefs, intentions and expectations. They are not guarantees of future performance. Zinc One cautions that all forward looking statements are inherently uncertain and that actual performance may be affected by many material factors, many of which are beyond their respective control. Such factors include, among other things: risks and uncertainties relating to Zinc One’s limited operating history, its proposed exploration and development activities on the Bongará Zinc Oxide Project and the need to comply with environmental and governmental regulations.  Accordingly, actual and future events, conditions and results may differ materially from the estimates, beliefs, intentions and expectations expressed or implied in the forward-looking information. Except as required under applicable securities legislation, Zinc One does not undertake to publicly update or revise forward-looking information.

The term “Holy Moley” is seldom, if ever, used by us but our powers of speech are severely hampered by […]

The province of Quebec appears to be going “all in” on powering the electric vehicle revolution. The bet is being […]