April 29, 2021 (Source) — Viscount Mining Corp. (TSXV: VML) (OTCQB: VLMGF) (“Viscount Mining”) is pleased to announce it has completed the field work of the second phase of a three-phase drill program at its Silver Cliff property in Colorado.

The 2021 Phase 2 exploration campaign is designed to expand the NI 43-101 Kate Silver Resource (KSR) done by Dr. Gilles Arseneau in 2018. This will be done by further defining the limits of the Kate East zone, and has the potential of increasing the grade and size of the deposit. Viscount is also expanding the drilling to increase the tonnage that can be included in upcoming resource reports. Also, additional drilling was conducted at the Passiflora target to continue to explore the potential to add to the total resource of the Silver Cliff project.

Work that was completed included a preliminary field test of ground magnetic and soil surveys which were completed in mid-March. The company commenced drilling on March 31 of this year and completed 10 holes for a total of 697 meters (2299 feet). The core from the 10 holes has been submitted to the lab for assays and will be news released when received.

In early March, a ground magnetometer and soil survey were conducted in the Kate East area. This was a test to see how well the survey reflects drill data, as the area surveyed has data from five core holes drilled. If the data correlates, this will make the surveys an in-expensive exploration tool.

Building on the above results, four of the new holes in Phase 2 were drilled inside the reserve estimate area defined by Dr. Arseneau’s NI 43-101, published in 2018. The aim of these holes was to further investigate a possible trend noticed during the Phase 1 drilling that may be an enriched silver zone. Three holes were drilled in the Kate extension to see to what extent the ore body extends to the Kate East. 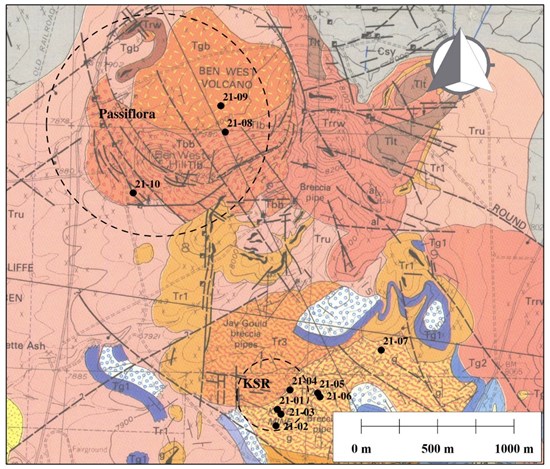 At the Passiflora an additional three holes were completed. One was drilled in the south end of the Ben Hill volcanic center, and discovered a new lithology, possibly an andesitic unit. This may be an indication that the magma chamber below the volcano was evolving to a more mafic composition than just rhyolite. Hole DDH-21-09 exhibited what can possibly be a propylitic alteration from 23 meters (76 feet) to the end of the hole at 183 meters (605 feet). A Propylitic alteration is often encountered as one of the alteration halos associated with porphyry ore deposits. Samples will be prepared for thin section analysis, to more fully determine if the mineral assemblage is consistent with the field interpretation. The last drill hole of this phase was drilled in the South part of the Passiflora target and showed strong silica alteration, as well as sulfidation, especially towards the end of the bore.

An internal report from CoCa Mines in 1983, estimated a potential resource of 40 million short tons at the Passiflora, based on 14 drill holes (not NI 43-101 compliant), with the best intercept reporting to be 256 g/t silver and 1.4 g/t gold. Viscount drilled one hole in the Passiflora in 2020 to a depth of 193.9 m that showed anomalous silver throughout, some anomalous gold as well as strong silica and clay alteration and pyritization over most of the hole.

Phase 3 will be focusing on the discoveries of Phase 2, and also looking towards expanding the Kate Silver Resource to the North.

NOT FOR DISTRIBUTION TO UNITED STATES NEWSWIRE SERVICES OR FOR DISSEMINATION IN THE UNITED STATES December 3, 2021 (Source) — Datable Technology Corp. […]

Much to my chagrin, it appears this damn COVID virus is refusing to let us be. I guess one positive […]