July 14, 2021 (Source) — TRU Precious Metals Corp. (TSXV: TRU) (OTCQB: TRUIF) (FSE: 706) (“TRU” or the “Company”) is pleased to announce that it has entered into an option agreement dated July 13, 2021 (the “Option Agreement”), with an arm’s length individual (the “Optionor”), in respect of 5 mineral licenses covering 51 contiguous claims (12.75 square kilometres (km2)) located in west-central Newfoundland (the “Optioned Claims”), on which the Company has found visible gold. The Optioned Claims are contiguous with the Company’s flagship Golden Rose project (“Golden Rose” or the “Golden Rose Project”). In addition, the Company has indirectly staked a larger land package surrounding the Optioned Claims (the “Staked Claims”). Image 3 below contains a map showing the locations of the Optioned Claims and the Staked Claims.

TRU Co-Founder and CEO Joel Freudman commented: “I am excited about this option to add to our district-scale land package at the Golden Rose Project. TRU has moved aggressively in recent weeks to expand our footprint here, and the presence of visible gold on the Optioned Claims further bolsters the geological merit of Golden Rose. Having now tactically consolidated some of the most prospective property within and surrounding Golden Rose, for the time being we are satisfied that we have achieved one of our strategic objectives previously announced only one month ago on June 15th, namely property acquisitions contiguous with or close to the Company’s existing properties. With these acquisitions completed at Golden Rose, we believe we are ideally positioned for further discoveries there as we continue to carry out our comprehensive ground-level exploration program in anticipation of drilling Golden Rose later this year.” 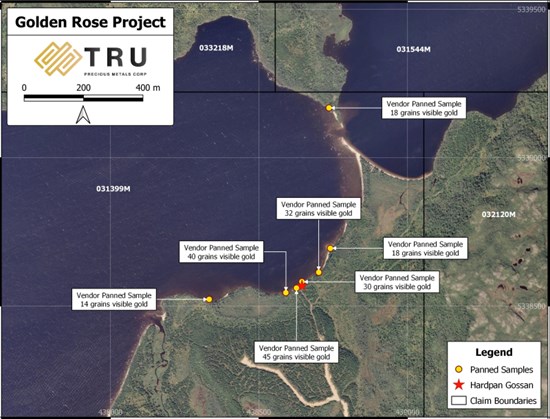 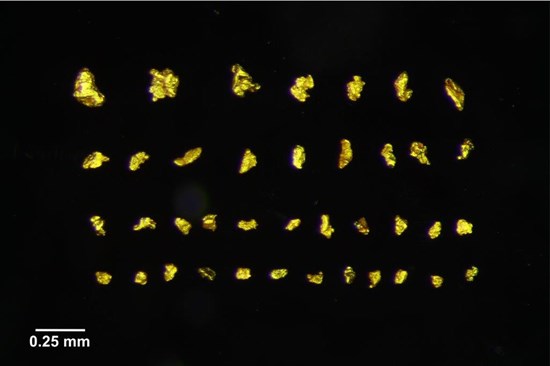 Optioned Claims
Barry Greene, P.Geo., TRU’s Vice-President of Property Development, and Pearce Bradley, P.Geo., TRU’s Exploration Manager, both visited the Optioned Claims on a recent due diligence visit and collected a single 12.9 kilogram wet sample for submission to ODM for analysis. Mr. Greene also discovered the gossan during such visit.

ODM’s analysis concluded: “The gold grains were likely subjected to minimal water transport as evidenced by the high proportion of pristine + modified morphologies and relatively high abundance of silt-sized grains suggesting a nearby source. The high calculated [heavy mineral concentrate] Au value suggests that the source, if bedrock, may be high grade.”

Separate from TRU’s sample, sampling and panning of beach sand and gravel over approximately 1 km by the Optionor reportedly returned numerous pristine to modified gold grains. The Optionor reported that the partially-exposed gossan identified by TRU was examined in several locations under the roots of upright trees.

Barry Greene, Vice-President of Property Development of TRU, added: “After panning so many pristine gold grains, we were pleasantly surprised to discover the hardpan gossan exposed under the roots of a nearby growing tree. As the roots were exposed to waves only during stormy weather, the gossan is not well exposed. Hopefully, the gossan represents the surface expression of a mineralized source which would enhance TRU’s Golden Rose Project. The mode of occurrence and morphology of the gold grains are indicative of being derived from a local erosional surface. As it lies along the intersection of several structures, the Optioned Claims will be an immediate target for our exploration team already working in the area.” 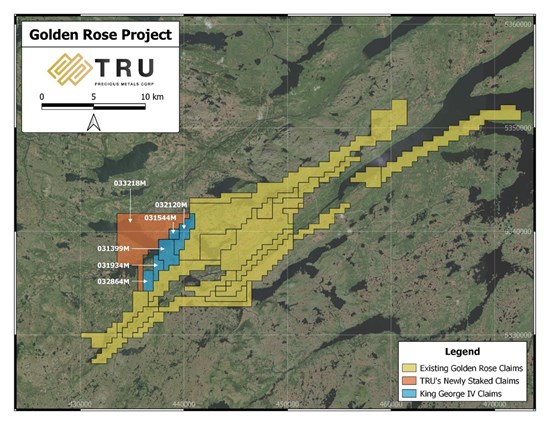 In addition, the Company must fund $50,000 in exploration expenditures on the Optioned Claims on or before July 13, 2022.

Upon exercise of the option, TRU will grant the Optionor a 2.0% net smelter returns royalty from any future mineral production at the Optioned Claims, of which 1.0% can be repurchased by the Company for $1,000,000 at any time.

Following the Company’s exercise of the option, should the Company define a National Instrument 43-101-compliant measured and indicated mineral resource estimate equal to at least 1,000,000 gold ounces (at 1 g/t cut-off) on the Optioned Claims, the Company shall make an additional cash payment of $250,000 to the Optionor.

The Option Agreement remains subject to regulatory approval by the TSX Venture Exchange.

The Staked Claims are contiguous with the existing Golden Rose Project and the Optioned Claims. Taken together with all other Golden Rose property transactions announced by TRU during June and July of 2021, TRU has more than doubled the property package from its initial size of 105.0 km2 to a total of 215.25 km2, all along and adjacent to the deposit-bearing Cape Ray – Valentine Lake Shear Zone.

The 12.9kg wet beach sand sample was collected independently by TRU and was pre-screened in the field to remove coarse material. The sample was placed in a large plastic sample bag, sealed and shipped by TRU to ODM. At the lab, ODM collected one +/-300 gram archival split. The sample was panned for gold, PGM’s and fine-grained metallic indicator minerals. Shaking table concentrates were refined by heavy liquid separation at S.G 3.3 to create Heavy Mineral Concentrates (HMCs)

The samples presented herein are selective by nature, and values reported may not represent the true grade or style of mineralization across the Golden Rose Project, including the Optioned Claims and/or the Staked Claims. The potential grades are conceptual in nature; there has been insufficient exploration to define a mineral resource; and it is uncertain whether further exploration will result in any targets being delineated as a mineral resource.

Barry Greene, P.Geo. is a qualified person as defined by National Instrument 43-101 and has reviewed and approved the contents and technical disclosures in this press release. Mr. Greene is a director and officer of the Company and owns securities of the Company.

About TRU Precious Metals Corp.
TRU has assembled a portfolio of 5 gold exploration properties in the highly prospective Central Newfoundland Gold Belt. The Company has an option with a subsidiary of TSX-listed Altius Minerals Corporation to purchase 100% of the Golden Rose Project, located along the deposit-bearing Cape Ray – Valentine Lake Shear Zone. TRU also owns 100% of the Twilite Gold Project, located along the same Shear Zone, and 3 under-explored properties including its Rolling Pond Property (under option) bordering New Found Gold Corp.’s high-grade Queensway Project. TRU’s common shares trade on the TSX Venture Exchange under the symbol “TRU,” on the OTCQB Venture Market under the symbol “TRUIF,” and on the Frankfurt exchange under the symbol “706.”

To connect with TRU via social media, below are links:

Cautionary Statements Regarding Forward-Looking Information
Neither TSX Venture Exchange nor its Regulation Services Provider (as that term is defined in policies of the TSX Venture Exchange) accepts responsibility for the adequacy or accuracy of this release.

This press release contains certain forward-looking statements, including those relating to acquiring and exploring the Optioned Claims, the Staked Claims, and the Golden Rose Project. These statements are based on numerous assumptions regarding the Optioned Claims and the Option Agreement, the Staked Claims, and the Golden Rose Project, that are believed by management to be reasonable in the circumstances, and are subject to a number of risks and uncertainties, including without limitation: mineralization hosted on adjacent and/or nearby properties is not necessarily indicative of mineralization hosted on the Optioned Claims or elsewhere on the Golden Rose Project; the exploration or monetization potential of the Optioned Claims and/or the Golden Rose Project; challenges in identifying and executing additional acquisitions, on favourable terms or at all; risks inherent in mineral exploration activities; volatility in financial markets, economic conditions, and precious metals prices; and those other risks described in the Company’s continuous disclosure documents. Actual results may differ materially from results contemplated by the forward-looking statements herein. Investors and others should carefully consider the foregoing factors and should not place undue reliance on such forward-looking statements. The Company does not undertake to update any forward-looking statements herein except as required by applicable securities laws.