“The receding of the local glacier and melting of the snowfields has now revealed a very exciting exploration target on Romios’ Trek South claims. To find such a large area of well-developed porphyry-style alteration, including pyrite-chalcopyrite bearing quartz veins and a peripheral zone of well-developed skarn veins, is a rare opportunity at a site so close to developing infrastructure,” stated John Biczok, VP of Exploration.

“The Trek South discovery is just 3 km from Romios’ Trek North Zone, one of the few known and partially drill-defined porphyry Cu-Au-Ag zones in the area not held by the Teck-Newmont Galore Creek JV and we look forward to advancing Trek South through geophysics and drilling in 2022,” stated Stephen Burega, President. 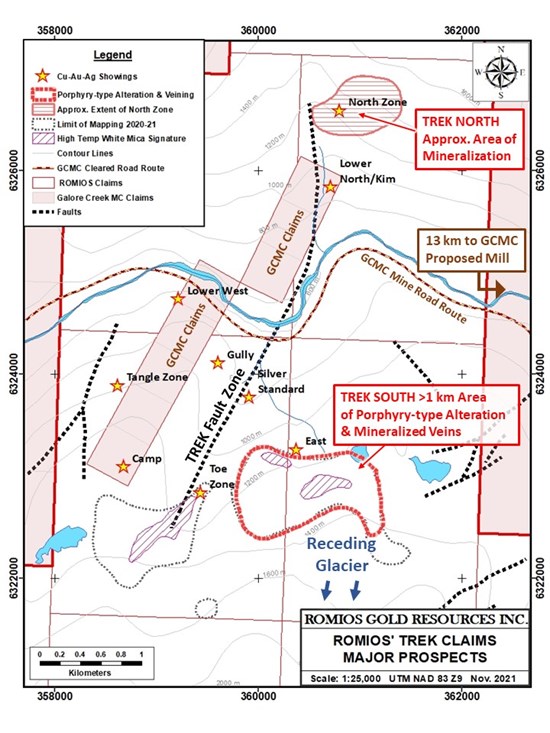 Romios’ TREK South claim block covers ~18 sq km of highly prospective ground known to contain at least 8 historic and underexplored Cu-Au-Ag showings in addition to the recently discovered porphyry-style alteration and mineralization. Following Romios’ 2019 discovery of garnet-epidote-pyrite skarn veins on the Trek South claims, the Company contracted HEG & Associates to undertake an alteration mapping and hyperspectral survey of part of the target area in 2020 and this work confirmed the presence of porphyry-type alteration minerals in two broad areas.

In 2021, Romios personnel undertook detailed mapping and sampling across part of the Trek South claims that until recently had been covered by relatively thin glacial ice and snowfields, resulting in the discovery of the porphyry-type mineralized and altered zone. In addition, the 2021 survey partially defined previously unknown intrusions which may be related to the mineralizing event, as well as numerous boulder trains of massive epidote alteration, +/- local copper mineralization (see Plate 3), apparently derived from an area still hidden beneath the glacier. 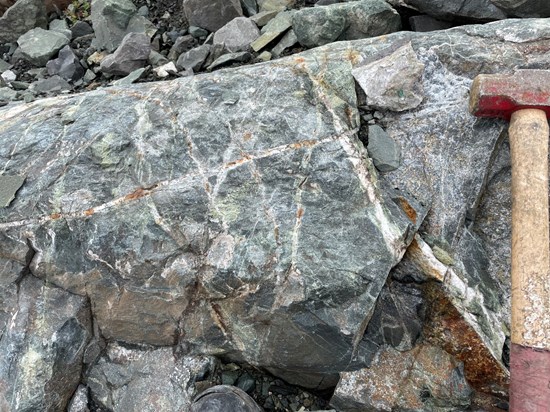 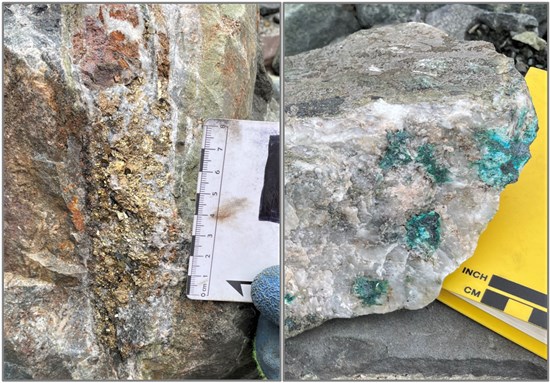 QAQC: The samples discussed in this document were grab and chip samples considered representative of the veins and boulders being sampled. They were submitted to the ISO/IEC 17025 accredited ALS Canada Ltd. laboratories in Terrace and Vancouver, BC for assay and multi-element analyses. As a matter of procedure, a rigorous quality assurance and quality control program was implemented to ensure reliable assay results by inserting alternating blanks and commercial assay standards at approximately every 10th position in the sample series.

It’s been a while since I’ve had a close look at the copper chart and, in my opinion, it doesn’t […]