February 14, 2022 (Source) — Romios Gold Resources Inc. (TSXV: RG) (OTCQB: RMIOF) (FSE: D4R) (“Romios Gold” or the “Company”) is pleased to report on the results of two diamond drill holes completed in September 2021 on the Gold-Copper Stockwork target at the Lundmark-Akow Lake project in NW Ontario. These two holes were part of a nine-hole program totalling 1,756 metres, drilled from 8 sites to test a variety of targets across this very large, 7,800-hectare property that is host to at least 4 different types of gold and copper zones.

“There is a good deal of intriguing mineralization in this project area,” commented Stephen Burega, President of Romios. “Almost every drill hole intersects gold-copper mineralization, often 2 or 3 different types. The majority of this belt of rocks is quite barren so to find a spot under relatively thin overburden cover like northwest Lundmark-Akow where there is such a clustering of mineralization is very encouraging and we believe that this work could lead to a significant discovery”. 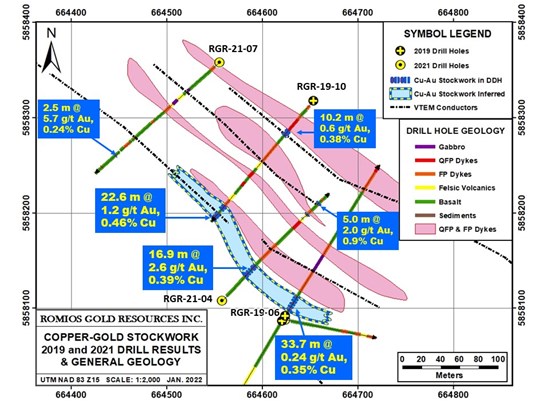 The stockworks occur in volcanic rocks adjacent to, and likely related to, large quartz-feldspar porphyry intrusions which are unusually common in the NW sector of the Lundmark-Akow claims. In addition to the main stockwork described above, similar but narrower parallel stockworks were encountered in several of the same holes (Map 1). The individual stockwork veinlets are typically a few centimetres wide but can form dense swarms over a few metres and often have very high individual metal values, e.g., up to 36.9 g/t Au over 0.33 m and 3.54% Cu over 0.68 m. The gold-copper veinlet stockworks have not been a primary focus of the drill programs so far but this latest drilling has now extended one 16 to 33 m wide (DW) Au-Cu zone across a strike length of >125 m. The improved gold values and continued good widths of the stockwork in hole RGR-21-04 have now made these stockworks a viable target on their own. Past geophysical surveys are currently being re-assessed to see if the stockworks can be delineated from the other EM targets in this area prior to drilling in 2022.

Romios Gold Resources Inc. is a progressive Canadian mineral exploration company engaged in precious- and base-metal exploration, focused primarily on gold, copper and silver. It has a 100% interest in the Lundmark-Akow Lake Au-Cu property and 4 additional claim blocks in northwestern Ontario and extensive claim holdings covering several significant porphyry copper-gold prospects in the “Golden Triangle” of British Columbia. Additional interests include two former producers, the La Corne molybdenum mine property (Quebec), a former high-grade gold producer – the Scossa mine property (Nevada), and the Kinkaid Nevada claims covering numerous Au-Ag-Cu workings. The Company also retains an ongoing interest in several properties including a 20% carried interest in five of Honey Badger Mining’s claim blocks in the Thunder Bay silver district of northwestern Ontario; a 2% NSR on McEwen Mining’s Hislop gold property in Ontario; and a 2% NSR on the Newmont Lake Au-Cu-Ag property in BC now owned by Enduro Metals Corp.