October 22, 2020 (Source) — Romios Gold Resources Inc. (TSXV: RG) (OTC Pink: RMIOF) (FSE: D4R) (“Romios Gold” or the “Company”) is pleased to report that it has commenced an airborne VLF-EM and Magnetic geophysical survey over its primary gold targets on the Lundmark-Akow Lake and North Caribou properties in northwestern Ontario, Canada (Map 1). This helicopter-borne survey is being conducted by Terraquest Ltd. on closely spaced lines focussed over postulated structural features thought to control the location of gold mineralization in both areas. If the location of these structures is confirmed they will become prime targets for the next phase of drilling.

The Lundmark-Akow Lake gold target is 25 km from Newmont Corporation’s Musselwhite Mine in the North Caribou greenstone belt (Map 1), approximately 500 km north of Thunder Bay. Drilling here in 2019 located perhaps the most significant gold intersection in this belt outside of the Musselwhite mine property, a quartz-pyrrhotite vein 4.75 m wide grading 8.64 g/t Au (true width is approx. 4.3 m) (see Romios news release July 10, 2019). This vein appears to be of an extensional style and is associated with a unique series of large, gold enriched, open-space filling calcite veins similar to those in the Red Lake and Timmins-Kirkland Lake gold camps. These veins are thought to indicate that the ore-forming fluids have a deep-seated crustal source of considerable extent. A second gold-quartz vein, 7.3 m wide, geologically similar but lower grade than the first vein, was intersected ~300 m to the north. The gold-bearing quartz veins, as well as the unique calcite veins, line up along an abrupt offset in the regional magnetic pattern believed to reflect a major fault at a high angle to the local stratigraphy (Map 2). If this current model is correct, the apparently >1 km long fault should contain mineralized veins itself, as well as controlling the location of the adjacent extensional-type offshoot veins intersected in the 2019 drilling.

The North Caribou claim block is located ~35 km WNW of the Lundmark-Akow Lake gold target and just 8 km from the all-weather road into the nearby community of Round Lake. It was acquired by Romios in March 2020 (see Romios news release dated June 22, 2020). The claims are dominated by the NE-trending North Caribou River Fault (NCRF) and a parallel fault 800 m to the south. Past work in the 1970s and ’80s by other operators was largely focussed on the exposures of the NCRF and led to the discovery of a series of small but high-grade gold +/- copper showings along this fault, e.g. Power Exploration’s “Trench M” returned assays of 9.9 to 55.7 g/t Au from a 23 cm wide, sulphide-rich vein, part of a broad series of en echelon veins. The great majority of the past drill holes targeted several of the prospects exposed along the NCRF and intersected up to 23 m of intensely silicified, brecciated host rocks infilled with quartz and sulphides (including pyrite, pyrrhotite, arsenopyrite +/- chalcopyrite +/- sphalerite) and gold grades up to 2.3 g/t Au/3.2 m and 6.35 g/t Au/0.4 m. This exploration work did not test the mineral potential of the obvious parallel fault zone nearby and the linking fault structures between the two parallel main faults. It is now known that in many gold camps (e.g. Kirkland Lake, Kalgoorlie, Val d’Or), the main fault zones are often too “tight” to host ore zones and it is only the subordinate splay faults or linking structures between the main breaks that create enough open space to host ore zones. Past VLF electromagnetic surveys of an adjacent claim block appear to show evidence of such linking structures. The presence of numerous well-mineralized small showings along the main fault is an encouraging indication that gold-rich fluids moved along that fault and may have been deposited in more favourable open spaces within the adjacent splay faults. The current Romios airborne VLF-EM and Magnetic survey is expected to define the main fault zones in considerable detail and delineate any splay faults linking the two main faults. A program of soil sampling, prospecting and mapping is planned over these structures in the early summer of 2021 followed by diamond drilling of any anomalous features. 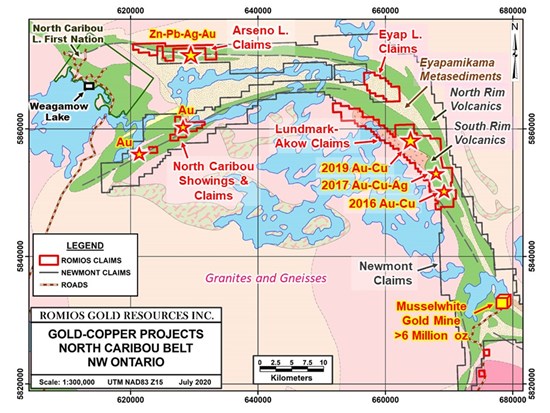 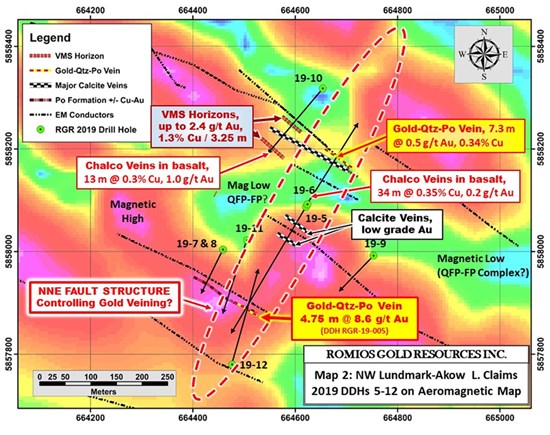 The technical information in this news release has been reviewed and approved by John Biczok, P. Geo., VP-Exploration for Romios Gold and a Qualified Person as defined by National Instrument 43-101. In addition to his extensive experience exploring for a wide variety of ore deposit types across Canada and India, Mr. Biczok spent 12 years conducting exploration and research at the Musselwhite mine.

Former Chinese leader, Deng Xiao Ping, is most famous in mining circles for his oft-repeated aside from the 1980s that […]

The EYES have it, Early Stage Detection of Diabetes and Cardiovascular Disease