Romios Discovers Gold and Base Metal Mineralization on Two Properties in the Golden Triangle, B.C.

October 27, 2021 (Source) — Romios Gold Resources Inc. (TSXV: RG) (OTCQB: RMIOF) (FSE: D4R) (“Romios Gold” or the “Company”) is pleased to report on the latest discovery of gold and base metal mineralization on two of the Company’s ten 100%-owned claim blocks in the Golden Triangle of northwestern British Columbia that all together cover a total of 360 sq km (excluding the Newmont Lake claims currently under option to Enduro Metals Corp. – See Dec. 4, 2018 Press Release).

During a month-long field program this past summer, the exploration team discovered the most significant gold and copper mineralization to date on the North-East and North-West claim blocks. Assays are currently pending from several other claim blocks including the recently discovered Trek South porphyry Cu-Au prospect.

“The source outcrops still need to be tracked down next summer and the extent of the mineralization assessed, however, these results are the most significant mineralization discovered to date on these properties and provide ongoing encouragement in an area of favourable host rocks exposed more and more every year by the melting glaciers and snowfields,” stated John Biczok, VP of Exploration.

“Romios’ claims in this area cover a number of porphyry copper-gold, shear zone gold, and VMS base metal prospects concentrated near the giant Galore Creek Cu-Au porphyry deposits, owned by a Teck-Newmont Joint-Venture (Galore Creek Mining Corporation) and currently in the pre-feasibility study stage,” stated Stephen Burega, President. “A number of our claim blocks are situated along the partially constructed roadway to those deposits and we continue to develop our understanding of the significant potential of these 100%-owned blocks.” 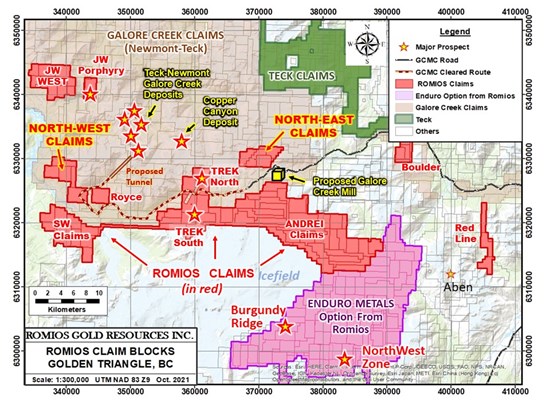 Romios’ North East claim block is located immediately north of the planned road route to Galore Creek and <2 km from the proposed Galore Creek mill site. The central claims are underlain by the highly prospective Lower to Middle Jurassic Hazelton Group metasediments and volcanics, the same rocks that host many important ore deposits in the Golden Triangle including the high-grade, argillite-hosted Eskay Creek-Au-Ag deposit, Brucejack Au mine and Red Chris Cu-Au mine. The rapid melting of the glacier overlying the edge of the Hazelton Group rocks has now exposed a broad area of pyritic argillites/shales where Romios’ crew discovered a number of large boulders of semi-massive pyrite and minor chalcopyrite, five of which assayed 0.2% to 0.7% Cu with two also being anomalous in gold – 0.3 and 1.35 g/t Au. Two boulders also contained significantly elevated values of antimony (216 and 2700 ppm Sb) and silver (8.3 and 14.8 g/t Ag) and one contained 430 ppm Co. One talus boulder of quartz vein material assayed 9.4 g/t gold.

Romios’ North West claim block is located 10 km SW of Galore Creek and the claims are traversed by the cleared route for the proposed mine access road. Exploration in 2021 was focused on areas underlain by a large pluton of the Texas Creek suite, an early Jurassic series of intrusions that host numerous gold deposits in this region including the Sulphurets, Scottie, Snip, Silbak Premier and Red Mountain deposits. Numerous large quartz veins were found on the North West claims during this brief program, many of them 0.5 m to 1.0 m wide. Two boulders of quartz vein material with minor pyrite assayed 5.3 and 8.9 g/t Au and a sample of a pyritic vein in outcrop assayed 5.8 g/t Au. Veins without any sulphides proved to be barren. Large areas of the pluton upslope from the mineralized veins remains unexplored and will be targeted in 2022.

The samples discussed in this document were grab samples considered representative of the veins and boulders being sampled. They were submitted to the ISO/IEC 17025 accredited ALS Canada Ltd. laboratories in Terrace and Vancouver, BC for assay and multi-element analyses. As a matter of procedure, a rigorous quality assurance and quality control program was implemented to ensure reliable assay results by inserting alternating blanks and commercial assay standards at approximately every 10th position in the sample series.