The survey will be flown parallel to the orientation of a 2002 MegaTEM survey that identified a series of steeply dipping conductors located close to the high voltage powerline that transects the property. The objective of the current survey is to re-fly the MegaTEM flight lines using a tighter (50m) line spacing and to use the 2002, 2017 and 2018 survey data to delineate the best conductive targets for a direct drilling program. The Property was also flown in 2017 on north-south flight lines.

Noble’s Project 81 is located within the Kidd-Munro assemblage of the western Abitibi Subprovince in Northern, Ontario, and is one of the largest contiguous, underexplored land packages in Ontario. The assemblage is one of the most ultramafic-rich volcanic successions of any age in the world and is hosts to the Kidd Creek VMS deposit, an important example of bimodal-mafic (ultramafic) volcanic-associated massive sulphide (VMS) deposits.

The EM system to be used is the AirTEM-150, a compact and state of the art concentric helicopter time domain EM system that can penetrate to depths of 400 m with high resolution. Measurements of the three axes of the EM secondary field are measured in a full waveform mode and the resulting profiles are used to determine the size, orientation, conductance and depth of the anomalous source. 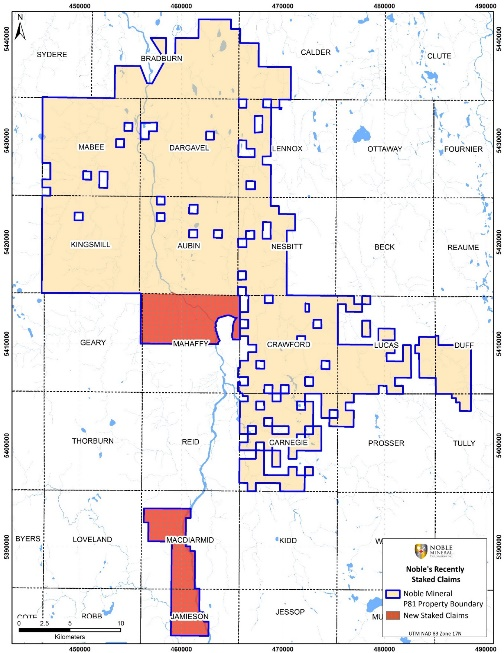 About Noble Mineral Exploration In.:

Noble Mineral Exploration Inc. is a Canadian based junior exploration company which, apart from its shareholdings in MacDonald Mines Exploration Ltd. and its interest in the Wawa-Holdsworth gold exploration property in Wawa, Ontario, has as its flag ship program Project 81, a contiguous land package of approximately ~79,000 hectares covering 15 townships immediately north of the Kidd Creek Mine (celebrating its 52nd year of operation). Project 81 which has seen very limited mineral exploration over the last 50 years and has had a number of historical drill indicated Gold, Copper, Lead-Zinc, Silver and Nickel showings. Noble has confirmed the discovery of a very large, low grade Nickel-Cobalt Deposit in Kingsmill Township in 2012, which is within the project area. The Lucas Gold showing was also drill tested by Noble in 2012 with additional follow up drilling to be carried out during the 2018-19 winter exploration season. Additional information can be found on our website at www.noblemineralexploration.com.

BECI was formed in 2001 to develop innovative airborne technology for mineral exploration to allow for direct drilling of targets without the need for ground geophysical follow-up. The Company was involved in the development of the AeroTEM system, offered by Aeroquest International Limited, from 2001 to 2006. In 2010 BECI began the development of AirTEM, a cost competitive, mid-power HTEM system and has since provided systems in Canada, Mexico and China. In 2016 BECI developed a triaxial magnetometer based on the Scintrex CS-3 optical magnetometer which can accept incoming spectrometer data.

Neither TSX Venture Exchange nor its Regulation Services Provider (as that term is defined in the policies of the TSX Venture Exchange) accepts responsibility for the adequacy or accuracy of this release. No stock exchange, securities commission or other regulatory authority has approved or disapproved the information contained herein.

The foregoing information may contain forward-looking statements relating to the future performance of Noble Mineral Exploration Inc. Forward-looking statements, specifically those concerning future performance, are subject to certain risks and uncertainties, and actual results may differ materially from the Company’s plans and expectations. These plans, expectations, risks and uncertainties are detailed herein and from time to time in the filings made by the Company with the TSX Venture Exchange and securities regulators. Noble Mineral Exploration Inc. does not assume any obligation to update or revise its forward-looking statements, whether as a result of new information, future events or otherwise.