As reported in the Company’s news release from November 16th, 2017, the main objective of the program carried out at Casino Afuera Sector in the Northern extension of El Limón Mine, was to twin 3 historic diamond drilling holes completed 1997 and 1998 and to drill 4 other off set holes in the same formation. Such historical holes reported anomalous values on gold in the weathered interval suggesting a supergenic enrichment on gold.

In addition, the drilling program was also designed to intercept the El Limón (Superior and Inferior) veins at depth below or within the weathered package of rocks.

Blanks were prepared and bought from Antioquia Granitos, an aggregate and ornamental rock company from Medellin. From the 27 blanks introduced only one was out of the ideal curve, but much below the allowed limit to characterize a bias.

Standard reference materials used for the QA/QC program were obtained and prepared by CDN Resource Laboratories Limited and their gold values were certified and supervised respectively by Mr. Duncan Sanderson, Licensed Assayer of British Columbia, and Dr. Barry Smee, PhD, P.Geo and Independent Geochemist. After a bias analysis it was proved that only 2 samples were slightly out of the acceptable range and do not invalidate Actlabs’ analysis.

Field duplicates analysis presented only one sample out of the dispersion chart cloud, where a gold anomalous value was detected in the vein and is probably related to nugget effect caused by a fine grained free gold presence. The other samples universe indicates a reasonable correlation for gold (R2=0.59).

A total of 487.80m, distributed in 4 DDH were carried out at Casino Afuera Sector. Drilling results in saprolite and saprolitized rock (saprock) did not confirm the historical widespread high gold values in the old holes, although some intervals have shown mineralization related to the El Limón Superior and Inferior veins in its North continuity, as shown in the following tables: 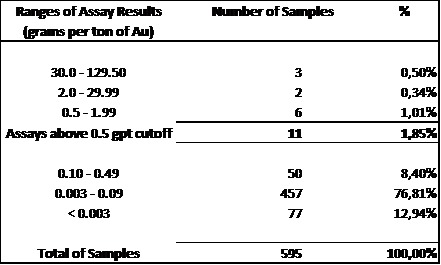 i)    Despite that the program did not confirm the gold grades of the historical holes and the potential for supergenic gold mineralization, now we are confident those were not reliable results;

ii)    Alike the known deposits at Segovia-Remedios District, a hydrothermally altered and milonitized granodioritic stock was identified at depth, generating a good expectation and useful criteria for the further exploration program at Para’s Properties including the possibility of other mineralization styles, such as disseminated;

iii)    Both superior and inferior veins were intercepted, demarcating the El Limón mineralized horizons probably at the North continuity of levels 2 and 3, as follows: 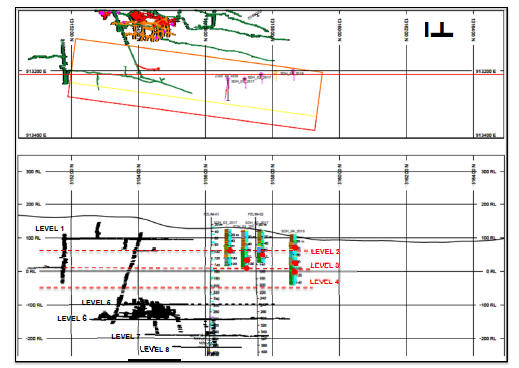 I am very optimistic as this could represent additional resources for El Limón plant at shallower and consequently lower cost mine levels. Further modeling and interpretations are underway as to delineate potential for future resources estimation.”

Paulo J. Andrade, BSc Senior Geologist, VP Exploration for Para Resources is the Qualified Person, who is responsible for the technical information contained in this news release.

Para is a junior producing gold mining company. Para owns approximately 80% of the El Limon project, in Colombia, which in addition to its current underground operation is purchasing mineralized rock mined by small artisanal miners working on the Company’s property. The El Limon and OTU properties also have exploration and development upside. The Company also owns 88% of the Gold Road Mine in the Oatman District of Arizona. In May 2018, RPMGlobal, the Company’s consultant, published a NI 43-101 PEA on Gold Road establishing a Mineral Resource estimate of 213,000 ounces of gold and a pre-tax NPV of $104 million. Mining is expected to re-commence in Q4 2018. Para will continue to take advantage of current market conditions to acquire and develop additional highly economic, near-term production assets that have strong exploration and development upside.

The term “Holy Moley” is seldom, if ever, used by us but our powers of speech are severely hampered by […]

The province of Quebec appears to be going “all in” on powering the electric vehicle revolution. The bet is being […]