The Jefferson Gold Project is located on the same mineralized trend and 15 kilometres northeast of the operating Haile Gold Mine, which produced 131,819 ounces of gold in 2018 and has measured and indicated gold resources of 3.1 million ounces. The Jefferson Project is located 55 kilometres along trend northeast of the former Ridgeway Gold Mine, where Kennecott Minerals produced more than 1.6 million ounces of gold from 1988-1999.

“Pancon acquired the Jefferson Gold Project, on the highly mineralized, prospective and underexplored Carolina Slate Belt, in mid-2016. In light of today’s strengthening gold market (see Figure 4), we have repositioned the Jefferson Project to take full advantage of market dynamics with our improved land package,” said Layton Croft, Pancon President and CEO. “Our Project now surrounds the former Brewer Gold Mine, which produced 178,000 ounces of gold several decades ago from open pit operations that mined only down to 100-metre depths.” 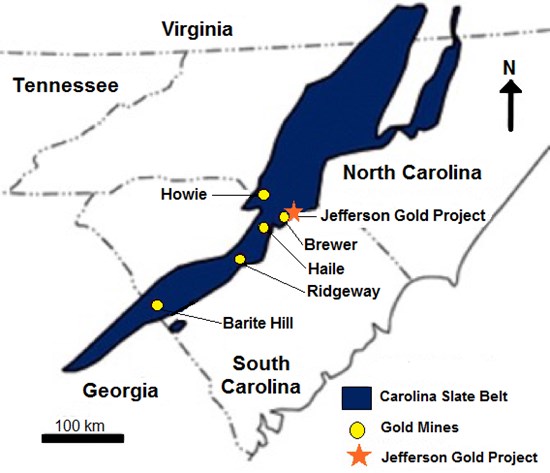 Figure 1: The Carolina Slate Belt runs from Georgia northwest through the Carolinas to Virginia, and has hosted many gold mines, including Barite Hill, Ridgeway, Howie, Haile and Brewer. The Jefferson Gold Project surrounds Brewer and is 15 km along trend from Haile. (Source: US Geological Survey and Hatcher and Butler). 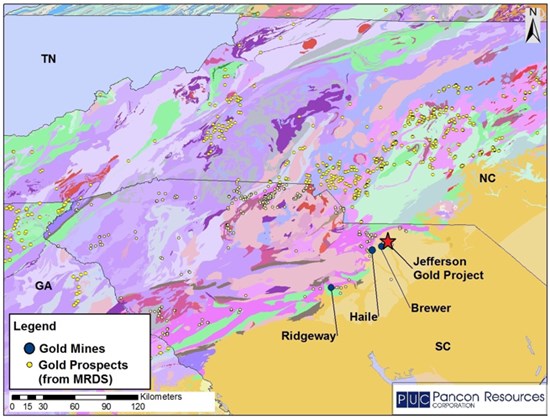 Pancon’s near-term plans for the Jefferson Gold Project include further expanding the land position, conducting geophysics, and preparing for a drill program on targets believed to correlate to the Brewer gold system and with geological similarities to the Haile Gold Mine, including similar host rock lithology, similar age, similar stratigraphy and time of mineralization, as well as similar alteration style and mineral assemblage (Ayuso, R.A., Wooden, J.L., Foley, N.K., Seal, R.R.II, Sinha, A.K., 2005, U-Pb zircon ages and Pb isotopic geochemistry of gold deposits in the Carolina Slate Belt of South Carolina; and Foley, N.K. and Ayuso, R.A., 2012, Gold deposits of the Carolina Slate Belt, southeastern United States: age and origin of the major producers). Of the 10 holes drilled on the Jefferson Gold Project between 2011-17, nine of them intersected gold mineralization, including one averaging 1.27 grams per tonne over 164.3 metres, true width unknown. Pancon cautions that the mineralization on adjacent and nearby properties is not necessarily indicative of the mineralization that may be identified on the Company’s property. 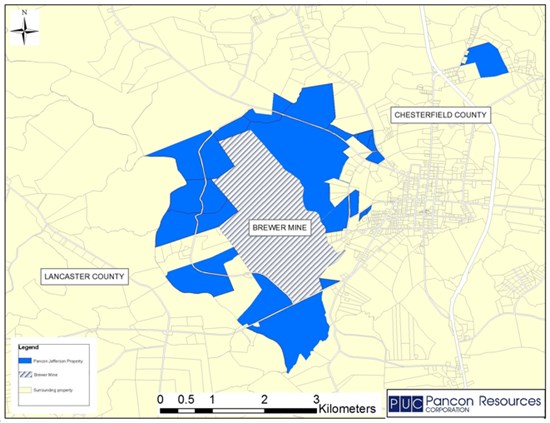 The chart below (Figure 4) shows gold prices since 2001 and how recent upward price movements have broken through previous resistance levels. 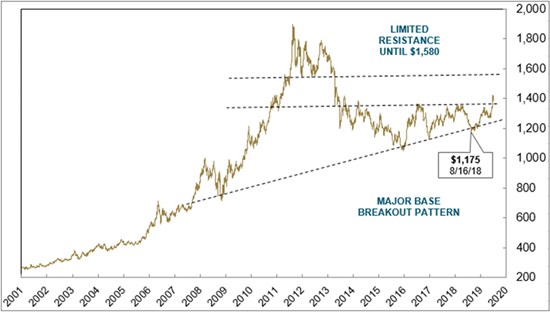 The technical information in this news release has been prepared in accordance with Canadian regulatory requirements as set out in NI 43-101 and reviewed and approved by Richard “Criss” Capps, PhD, RPG, SME REG. GEO, a Qualified Person as defined by NI 43-101.

Pancontinental Resources Corporation (TSXV: PUC), or Pancon, is a Canadian junior mining company focused on North American gold and battery metals projects in proven mining districts and near or surrounding producing or former mines. Pancon’s 100%-owned Jefferson Gold Project is 15 km along-trend from the Haile Gold Mine and surrounds the former Brewer Gold Mine property, on the prolific and underexplored Carolina Slate Belt in South Carolina, USA. In addition, Pancon has 5 nickel-copper-cobalt projects in Northern Ontario. The Montcalm, Gambler, Nova and Strachan Projects are near and surround the former Montcalm Ni-Cu-Co Mine property, located 65 km northwest of Timmins. The St. Laurent Project has an advanced Ni-Cu-Co-Au-Pt-Pd target and is located 50 km south of Detour Lake Mine and 20 km southwest of Casa Berardi Mine.

The new S&P/TSX Battery Metals Index – what were they thinking?

InvestorIntel Corp. is pleased to announce the appointment of Stephen Lautens as its new Director. He will continue to serve […]

Molybdenum – securing a domestic supply of the vital but underappreciated mineral

Element 42 on the periodic table is Molybdenum (Mo), commonly referred to in the industry as the easier to pronounce […]

Every once in a while, something that you have been working on, seemingly forever, starts to come together and that […]