March 27, 2019 (Source) — Pancontinental Resources Corporation (TSXV: PUC) (“Pancon” or the “Company”) has completed its first exploratory drill program at the early stage Montcalm Ni-Cu-Co Project, adjacent to the former Montcalm Mine owned by Glencore, 65 kilometres northwest of Timmins, Ontario. The purpose of the maiden drill program was to test airborne virtual time-domain electromagnetic (VTEM) geophysical anomalies identified in 2018. All assay results have been received from 10 diamond drill holes which produced approximately 4,300 metres of drill core.

Pancon President and CEO Layton Croft stated: “We drilled 10 VTEM anomalies covering a broad section of the Project area. Narrow (<1.5 metre) sections of massive sulphides, net textured sulphides and sulphide stringers were intersected, explaining all but 2 of the VTEM anomalies. The mineralized intervals did not return anomalous Ni-Cu-Co assay results. Further evaluation of the data identified a complex magnetic feature, hosting a cluster of electromagnetic (EM) anomalies we are calling the Hook zone. We are now conducting induced polarization (IP) and geophysical reinterpretation on the Hook zone in anticipation of follow-up drilling.” 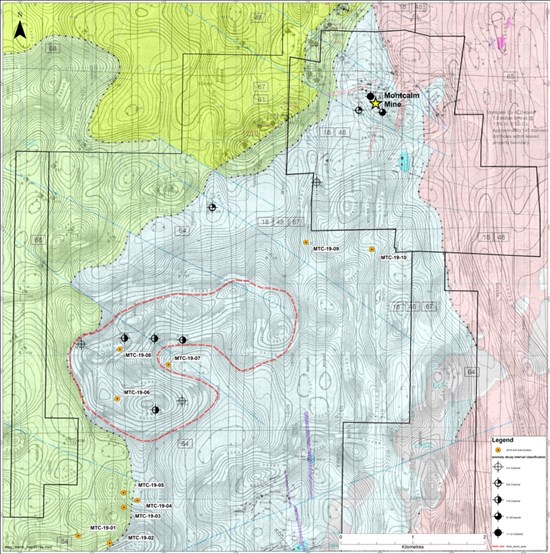 About the Montcalm Project:

The Montcalm Project (3,780 hectares, 37.8 square kilometres) is located within the prospective Montcalm Gabbro Complex in the Montcalm Greenstone Belt, 65 kilometres northwest of Timmins, Ontario. The Project is contiguous to and surrounds the western, northwestern and southwestern portion of the former Montcalm Mine, which was discovered and developed based on a single airborne electromagnetic anomaly identified in the 1970s and previously mined 3,931,610 tonnes of ore grading 1.25% nickel (Ni), 0.67% copper (Cu), and 0.051% cobalt (Co), producing in excess of 4 million pounds of Co (Ontario Geological Survey, Atkinson, 2011). The Company cautions that the mineralization on this adjacent property is not necessarily indicative of the mineralization that may be identified on the Company’s property. In January 2018, Pancon acquired an option to earn a 100% interest in the Montcalm Project, as well as in the nearby Nova Project, as detailed in its January 10, 2018 news release.

The technical information in this news release has been prepared in accordance with Canadian regulatory requirements as set out in NI 43-101 and reviewed and approved by Todd Keast, P.Geo., a Qualified Person as defined by NI 43-101. Mr. Keast is a member of Pancon’s Technical Advisory Committee and Pancon’s Projects Manager. Certain technical information within this news release is historical in nature and pre-dates NI 43-101 standards; this information is believed to be reliable however the Company has not verified this material.

Pancontinental Resources Corporation (TSXV: PUC), or Pancon, is a Canadian-based exploration company with a mission to generate value through responsible exploration of prospective assets proximal to producing/former mines in low-risk areas. Pancon holds five nickel-copper-cobalt projects in Northern Ontario. The Montcalm Project, Gambler Project, Nova Project and Strachan Project are adjacent to and near the former Montcalm Ni-Cu-Co Mine located 65 km northwest of Timmins. The St. Laurent Project has an advanced Ni-Cu-Co-Au-Pt-Pd target and is located 50 km south of Detour Lake Mine and 20 km southeast of Casa Berardi Mine. The Company also holds a 100% interest in the Jefferson Gold Project near Haile Gold Mine and adjacent to the former Brewer Gold Mine on the Carolina Gold Belt in South Carolina, USA.

October 5, 2022 (Source) – Murchison Minerals Ltd. (“Murchison” or the “Company”) (TSXV:MUR)(OTCQB:MURMF) is pleased to announce the preliminary results of the prospecting […]

Those of a certain vintage remember when interest rates were truly high. Today doesn’t hold a torch to the late […]