July 5, 2018 (Source) — Goldplay Exploration Ltd. (TSXV: GPLY, OTCQB: GLYXF – the “Company” or “Goldplay”) is pleased to provide an update with respect to the Company’s ongoing exploration activities and plans for 2018.

Over the past 4 months, Goldplay has pursued an aggressive exploration program leveraging the team’s experience and track record in the discovery of Au and Ag deposits in the Rosario Mining District, Sinaloa, Mexico.

Goldplay has re-opened all historical shallow underground workings at El Habal, aiming to complete a detailed 3D modelling of mineralized zones, together with geological mapping, sampling and delineation of new targets for future diamond drilling.

An additional surface exploration program (trenching, geological mapping) is anticipated to be completed in 2018 inside the 6km long – 1 km wide mineralized corridor. Upon delineation of new targets, the Company will initiate a diamond drilling program in newly identified areas. The Company has defined two new areas for exploration surrounding the historical Mina La Espanola and Northeast of the historical Mina El Habal in the Octavio area(Figure 01). 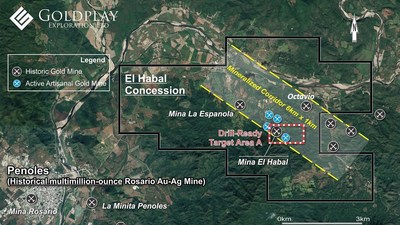 Goldplay has received, and is reviewing, a total of 52 drill holes, including a historical exploration and drilling database and related core-boxes A summary of initial 30 historical results (2) completed by SilverMex and titled ( “3000 Meter Core Drilling Program to Commence on the San Marcial Silver Project” dated May 14, 2010  was filed on SEDAR May 14, 2010, by Silver One Mining Corporation).

Goldplay has identified that an additional 22 drill holes were completed post-filing of historical NI 43-101, and they were not incorporated in the historical National Instrument 43-101 – Standards of Disclosure for Mineral Projects (“NI 43-101”) resource completed by Silvermex. This represents an immediate opportunity to update and expand the resources.

Goldplay is currently sampling/resampling  core samples to collect critical information, including new Au, Ag and multi-element assays, forecasting a steady flow of assay results throughout the remaining part of July and following months. This will form the basis for completion of a new resource estimation  forecast for completion by the year end.

Goldplay has recently completed a successful hearing with the Ejido Naranjo o Tebaira (land owner), receiving approval to initiate a surface exploration program and it is planning to initiate a diamond drilling program in the San Marcial Project. 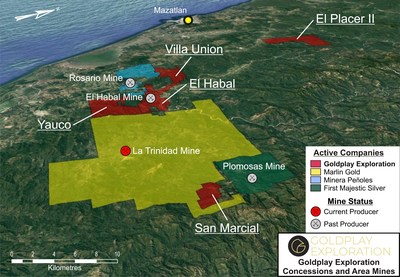 The historical NI 43-101 covers only  600 m of a mineralized trend, showing expansion upside open along strike and down dip for an additional 3.5 km (Figure 03). Goldplay has identified highly anomalous historical results carrying elevated grades for gold, silver, zinc and lead in the areas numbered from 1 to 14 (Figure 03_General Project Overview).

Along the San Marcial Vein Structure (Figure 03), previous historical surface results from trenching have revealed numerous high-grade results including 9.70m @ 520 g/t Ag At Area of Interest 1, Las Cuadrillas, there are historical surface results from trenching including 27.5m @ 2.95 g/t Au.  A summary of historical results (2) completed by SilverMex and titled (“Silvermex reports high-grade trench sampling assays. Highlights include: 9.70 m of 520.9 g/t Ag, and 1.75 m of 1,770 g/t Ag” dated May 11, 2010  was filed on SEDAR May 113, 2010, by Silver One Mining Corporation).

Goldplay has upgraded access roads to the San Marcial Project and it has already assembled a team of geologists and prospectors to initiate the surface exploration program in the 14 target areas. The exploration program to be carried out in the next 6 months will comprise of: 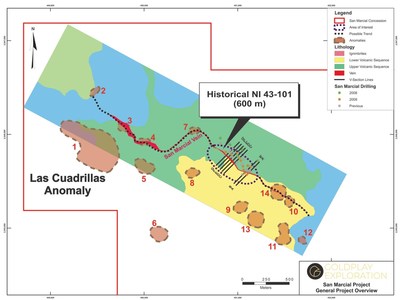 The Qualified Person under the NI 43-101 Standards of Disclosure for Mineral Projects for this news release is Marcio Fonseca, President and CEO of Goldplay, who has reviewed and approved its contents. The Qualified person has not done sufficient work to classify the historical estimate as current mineral resource. Goldplay is not treating this historical NI 43.101 as current mineral resources.

The Company also announces the resignation of Yaron Conforti as V.P. Corporate Development. Goldplay would like to thank Mr. Conforti for his contributions to the Company and wish him success in his present and future endeavors.

The San Marcial consists of 1,250 hectares, located south of the La Rastra and Plomosas historical mines and 20 km from the Company’s 100% owned El Habal Project in the historic (gold-silver) Rosario Mining District, Sinaloa, Mexico. The San Marcial consists of an attractive near-surface high-grade silver, zinc and lead project with a historical National Instrument 43-101 – Standards of Disclosure for Mineral Projects (“NI 43-101”) (1) with an immediate opportunity for resource expansion.

The existing historical NI 43-101 resource estimation exhibits significant exploration upside as it only comprises 30 drill holes completed up to November 2008. Additional 22 drill holes were completed post-filing of historical NI 43-101, representing an immediate opportunity to update and expand the resources. The historical NI 43-101 covers 600 m of a mineralized trend which is open along strike for an additional 3.5 km, supported by positive surface exploration results. The mineralization is an open down dip as most of the historical drilling was completed only up to 250 m below the surface in the resource estimation area. Historical preliminary metallurgical results from oxide and sulfide samples from San Marcial have indicated column leach tests recoveries in the range of 80% for a 72-hour leach period and preliminary flotation test work in drill core composite samples reporting recoveries in the range of 90%. The mineralization at San Marcial is typical of the low sulphidation, epithermal systems hosted near the contact of the Tertiary, Upper and Lower Volcanic units in the Sierra Madre Occidental Geologic Province.

Along the 3.5 km mineralized trend, there are highly altered hydrothermal breccias, conglomerates, and relatively fresh dacite porphyry intrusive. Faulting is an important structural feature related to the silver gold zinc lead copper mineralization, and the intersection of east-west with northwest structures are considered the most prospective areas for exploration at San Marcial. There are two main mineralized zones (upper and lower), located in the center of the mineral concession and both outcropping at surface. Both mineralized zones and associated host rocks exhibit fracture filling and typical hydrothermal textures of epithermal deposits. There is local brecciation hosting mineralized zones.

San Marcial exhibits significant exploration upside supported by historical regional exploration programs completed by previous operators with the identification of 14 exploration targets like San Marcial inside the concessions. Some of these exploration targets consist of old shallow pits, caved shafts and historical underground workings in areas with extensive hydrothermal alteration hosted by major regional structures.  Goldplay is providing the historical data and historical NI 43-101 for informational purposes only.  Goldplay has not completed any quality control assurance program to the historical drill data and NI 43-101.  Although the Company believes that the work was completed by competent persons to the standards of the day and the Company cautions the reader that the drill results are historical in nature and have yet to be verified by the Company’s “Qualified Person” under NI 43-101.

Visionstate cleaning up with the Internet of Things

The Internet of Things (IoT) is just taking off now. The Global IoT market size is forecast to grow from […]