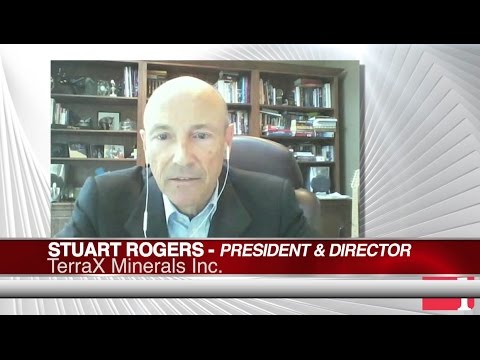 Stuart W. Rogers, President and Director of TerraX Minerals Inc. (TSXV: TXR), in an interview with InvestorIntel CEO Tracy Weslosky discuss the competitive advantage of assembling a major gold district in on “one of the major high-grade historic camps in Canada.”  Discussing the recent results from a 27,000-meter drilling program, Rogers describes what TerraX is doing in the new year and provides additional insight into what a gold investor should look for in an exploration story on the market.

Tracy Weslosky: Stuart you are one of the top six high-grade gold deposits in the resource sector. Can you give us a bit of an overview for those out there in InvestorIntel land that may not have heard of you before?

Stuart Rogers: At TerraX we’ve assembled a major gold district. We’re right adjacent to the city of Yellowknife, one of the major high-grade historic gold camps in Canada. I guess the key to this is high-grade and the other key is that we’re right beside a city so we have excellent infrastructure.

Tracy Weslosky: And, of course, TerraX Minerals just announced the recent results from a 27,000-meter drilling program. Can you give us the highlights and tell us what you found?

Stuart Rogers: We’ve actually released the first four holes in that drill program so we’ve taken a brief pause and we will be back drilling again in January. We still have lots of results to come. The first four holes are all successful. We extended the zone at depth. We extended along strike and we had high-grade gold intercepts such as 5 meters of 29 grams a ton in a hanging wall, another 2 meters at 24 grams a ton in the main zone. Excellent results for the first four and we’ve got lots more results coming.

Tracy Weslosky: Of course, the drilling results that you just announced are obviously high-grade gold. Can you tell us a little bit more about what this means?

Stuart Rogers: What this means with these drill results is that they are actually extended the gold that we had discovered further down dip, like further deeper into the deposit. We also extended along strike. What we did is we also were able to show continuity in the mineralization. That’s what’s really important. Also in these drill holes we had the main zones that we hit, but we also had pervasive gold mineralization throughout the hole so lower gold mineralization, which has meant that we have to assay the complete hole because we have gold all the way through it though obviously some of it is more anomalous than high-grade, but we do have the main zones that make this a pretty significant find we think.

Tracy Weslosky: Okay. I’m going to ask you because you’re obviously a gold expert, which I am not. What does a “significant find” actually mean to you and what should we as accredited investors be looking for?

Stuart Rogers: Well, what you’re always looking for initially is high-grade zone. You’re looking for, like, wide zones of mineralization. You’re looking for extensive strike area, which we’ve identified on surface and we’re testing now. Then eventually you do all the work and you got an ore body and a mine. We think we’re on the track — on track for that with the results we’re getting today.

Tracy Weslosky: Speaking of being on track, when I read your news release it said you might be drilling again in January. Is it not rather cold to be drilling in January….to access the complete interview, click here