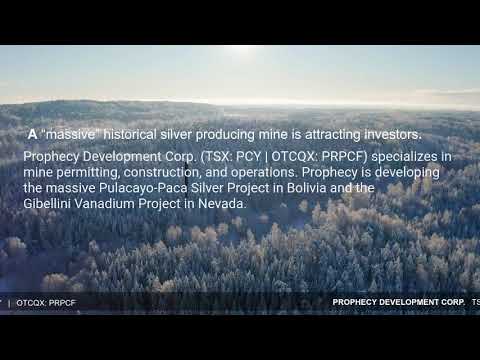 Silver gets little attention compared to gold, but silver often follows gold. With gold up significantly in 2019, and silver starting to catch up, investors would be wise to look again at some silver miners. One in particular is set to soar as it has definitely flown under most investors radar, and appears to be very undervalued. This stock has had a great 2019, drawing in the attention of Eric Sprott as a significant investor.

Prophecy Development Corp. (TSX: PCY | OTCQX: PRPCF) specializes in mine permitting, construction, and operations. Prophecy is developing the massive Pulacayo-Paca Silver Project in Bolivia and the Gibellini Vanadium Project in Nevada. The Company is managed by mine builders with a combined 100 years plus of industry experience.

The Pulacayo-Paca Silver Project in Bolivia

Prophecy acquired the project in 2015 at the bottom of the silver cycle when silver was priced at US$14/oz. According to Prophecy: “Based on historical production the mine is the second largest silver mine in the world.” It is very well advanced with over 95,000 meters of drilling, a Feasibility Study, and is fully environmentally compliant.

Executed on October 3, 2019 the Pulacayo-Paca Mining Production Contract between Prophecy and the Bolivian government grants Prophecy the 100% exclusive right to develop and mine at the concessions for up to 30 years. This is comparable to a mining license in Canada or the United States.

John Lee, Executive Chairman of Prophecy Development Corp., stated: “It is only recently that we started the program on this wonderful silver project called Pulacayo in Bolivia.”

Pulacayo in Bolivia is a world premiere silver address

The Paca deposit has contained 20.9 million ounces of silver in the Inferred category.

According to historical underground mining records the current Pulacayo Resource covers 1.4 km in strike and represents only a small portion of the Tajo vein system which is over 3 km in strike length and open to least 1,000 meters at depth.

Phase two drilling has started on a 5,000-meter program that will consist mainly of wide step-out drilling up to 1.5km west (Western Block) of the current Pulacayo Resource.

Joaquin Merino, Prophecy’s VP for South American Operation, states: “Current artisanal mining at the surface serves as strong evidence that the Tajo vein projects to surface at the Western Block (underground mining took place from early 1800 to 1952). Pulacayo is a very large system and with this program we will test the boundaries of mineralization near the surface and its continuity along strike.”

Prophecy Development Corp. (through its wholly owned US subsidiary Nevada Vanadium) has submitted the applications and Engineering Design Reports to the Nevada Division of Environmental Protection for the primary mining permits that govern project construction, operations and closure of its Gibellini Vanadium Project located in Eureka County, Nevada, USA. With the support of federal and state regulators the Prophecy team is actively engaging all stakeholders in order to obtain all the state and federal permits required to begin construction of North America’s first primary vanadium mine and will represent the starting point of a well defined 12 month process.

Not only is Prophecy very undervalued relative to peers, Prophecy offers investors a very large high grade poly-metallic opportunity (silver, vanadium, and some zinc and lead) with plenty of exploration upside at both the Pulacayo-Paca Silver Project in Bolivia and the Gibellini Vanadium Project in Nevada.

Prophecy Development Corp. is based in Vancouver Canada; and has a market cap of C$ 38 million. The analyst target price is $13.50, representing a massive upside. It seems legendary miner, Eric Sprott, also sees the potential, suggesting investors should also take a long look at Prophecy.

In a recent InvestorIntel interview, Peter Clausi speaks with David Morgan of The Morgan Report, about investing in silver, the […]