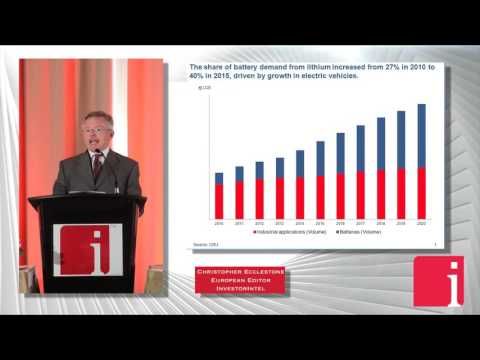 He addressed the issue raised recently by Goldman Sachs in its claim that ‘Lithium is the new gasoline”.

This address elaborates on what Christopher wrote recently in InvestorIntel:

Goldman has come up with the rather glib sound bite that “Lithium is the New Gasoline”. Even the most shameless Vancouver promoter would not have coined that clanger and everyone I know in the lithium space thought it not much more useful than for a bit of a laugh … Everyone knows the combustion engine runs on gasoline (or diesel) and that the motor is generally made out of metal as is the fuel tank. The car does not run on electricity, per se, so the battery, made out of lead mainly, stores electricity generated by the car’s motion to power the ignition, the instruments, lights and windows, etc. The gasoline powers the car not the metals it is made of.

He then contrasts the calculation on lithium carbonate demand published by Goldman Sachs and contrasts it with the projections from a research firm that has long followed the lithium industry.