Photofrin(R) has been documented to induce skin sensitivity in patient’s treated with the PDC to sunlight or bright lights after administration. Patients who receive Photofrin(R) will be photosensitive and must strictly avoid exposure of skin and eyes to direct sunlight or bright indoor light (i.e.: examination lamps, dental lamps, operating room lamps, unshaded light bulbs at close proximity, etc.) for at least 30 days post treatment. Some patients may remain photosensitive for up to 90 days or more. The photosensitivity is due to residual traces of the drug, which will be present in all parts of the skin. This necessitates the patient to stay indoors after treatment to prevent potential skin damage.

This latest research adds more support to the high safety profile of the lead drug candidate TLD-1433 and its ability to minimize one of the reported side effects of PDT by a FDA approved PDC. Theralase plans to commence clinical evaluation of TLD-1433 in Non Muscle Invasive Bladder Cancer (“NMIBC”) in mid 2015. 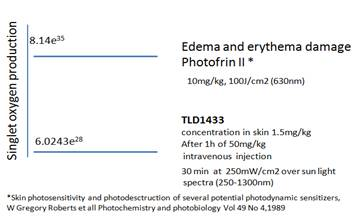 Founded in 1994, Theralase Technologies Inc. (“Theralase(R)”) (TSXV: TLT) (TLTFF: OTC Pink(R)) designs, manufactures and markets patented super-pulsed laser technology used for the elimination of pain, reduction of inflammation and dramatic acceleration of tissue healing. Theralase has sold over 1,200 systems to licensed healthcare practitioners, including: medical doctors, chiropractors, physical therapists and athletic therapists. Theralase has been so successful in healing nerve, muscle and joint conditions in clinical practice that Theralase’s scientists and clinicians have now turned their attention to investigating the application of its lasers in the destruction of cancer, using specially designed molecules called Photo Dynamic Compounds (“PDCs”), which are able to localize to the cancer cells and when light activated, destroy them.