February 23, 2015 (Source: Accesswire) — Theralase Technologies Inc. (“Theralase”) (TLT:TSXV) (TLTFF: OTC Pink(R)) announced today that it has identified a potential mechanism of how its lead anti-cancer drug works to destroy cancer cells and has also discovered a new application of the lead drug that may lead to the ability to detect the presence of cancer cells.

Theralase’s Ruthenium based PDC TLD-1433 combined with transferrin has now been branded and trademarked by the Company, as RutherrinTM.

TLD-1433 is able to bind to transferrin to form RutherrinTM, as evident from the change in absorption spectra in the chart below. These findings support the preferential uptake of RutherrinTM (transferrin-bound TLD-1433) by cancer cells that are known to have an increased number of transferrin receptors. 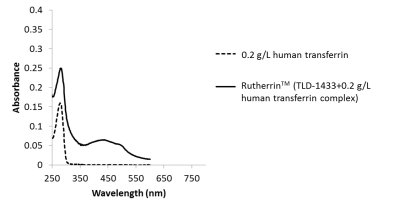 In the fluorescence micrograph images below, uptake of TLD-1433 alone (left image) and RutherrinTM (right image) are shown. RutherrinTM allows TLD-1433 to uptake faster and in larger quantities into rat bladder cancer cells (AY27) than without transferrin by 300%. These photos also demonstrate that RutherinTM is not located in the nuclei of the cell, but localizes into the cytoplasm of the cancer cell, potentially at the mitochondria. Thus how TLD-1433 and RutherrinTM work is by localization into the cytoplasm (potentially the mitochondria) and destruction of the cell upon light activation through apoptosis (natural cell death).

Roger Dumoulin-White, President and CEO of Theralase stated that, “I am delighted that the Theralase scientific and research team has identified the potential mechanism of action of how our lead PDC TLD-1433 alone and when combined with transferrin to produce RutherrinTM is able to destroy cancer cells. By possessing the ability to enter a cancer cell, locate and attach to resident mitochondria and when light activated destroy the cancer cell, both TLD-1433 and RutherrinTM demonstrate a clear first mover advantage in the war on cancer, providing high efficacy with virtually no side effects. Based on the latest research RutherrinTM is able to provide 300% more payload of TLD-1433 to the cancer cell than TLD-1433 on its own. RutherrinTM, thus is a highly cytotoxic (cell killing) PDC, but because it kills the cell through apoptosis (natural cell death) it also presents an extremely high safety profile. The new discovery that TLD-1433 and RutherrinTM are also able to potentially act as diagnostic agents to detect cancer cells, provides the uro-oncologist with an additional tool of not only being able to detect resident cancer cells more easily and faster than traditional methods, but subsequently destroy them as well. This “one-two” punch to detect and destroy cancer has tremendous potential upside to Theralase, but more importantly to the patients inflicted with this deadly disease.”

In 2015, Theralase will execute on two strategic objectives aimed at increasing long term shareholder value in both our Therapeutic Laser Technology (“TLT“) and Photo Dynamic Therapy (“PDT“) divisions; specifically: the launch of our next generation TLC-2000 therapeutic laser with Cell SensingTM technology that provides higher efficacy than any other therapeutic laser on the market and the commencement of our Health Canada / FDA Phase I / II a clinical trial in humans for Non Muscle Invasive Bladder Cancer (“NMIBC“) aimed at the destruction of bladder cancer.”

Theralase Technologies Inc. was recognized as a TSX Venture 50(R) company in 2015. TSX Venture 50 is a trademark of TSX Inc. and is used under license.