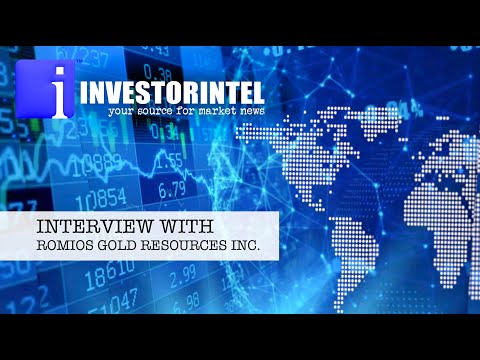 In a recent InvestorIntel interview, Tracy Weslosky speaks with Tom Drivas, President, CEO and Director of Romios Gold Resources Inc. (TSXV: RG) on the M&A formula utilized by Romios targeting gold-copper-silver acquisitions across North America. In this interview Tom highlights a series of projects including four historic silver prospects in the Thunder Bay Camp in Ontario. They also discuses the gold-copper porphyry exploration potential of Romios in British Columbia’s Golden Triangle and the resumption of exploration at Romios Gold’s bonanza-grade Scossa Gold Mine Property in Nevada.

In this InvestorIntel interview, which may also be viewed on YouTube (click here to subscribe to the InvestorIntel Channel), Tom said, “The Thunder Bay Project has produced quite a bit of silver in the past. There are a number of mines that have produced silver and one of them was actually the highest producer in the world at the time.” He added that Romios has acquired a number of properties around those mines.

Tom also provided an update on the recently undertaken exploration program on the Company’s Scossa bonanza-grade gold mine property in Nevada, USA. He said that the Scossa mine produced gold in the 1930s and produced bonanza-grade ores thought to have graded 1,200 oz/t gold. He added that the ore from the property was so rich that it was stored in a bank vault. He also said that Romios is concentrated on gold, copper and silver and “…for the last 10 years has acquired a large package of properties in the Golden Triangle.”

Romios Gold Resources Inc., a progressive Canadian mineral exploration company established in 1995, is engaged in precious and base metal exploration primarily focused on gold, silver and copper. It has extensive claim holdings covering porphyry copper-gold prospects in the “Golden Triangle” of British Columbia as well as a 100% interest in the Lundmark-Akow Lake gold-copper property in NW Ontario and two former producing mines: the La Corne molybdenum mine property in Quebec and the Scossa gold mine property in Nevada. The Company also retains a 2% NSR on the Hislop gold property in Ontario.