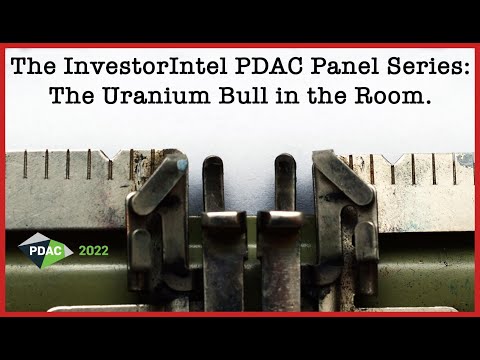 In the video, which can also be viewed in full on the InvestorIntel YouTube channel (click here), Curtis Moore says that there was a lot of excitement at PDAC this year over uranium, with the spot price rising and nuclear power being an essential part of the world-wide commitment to carbon-free energy production. Dr Richard Spencer added that “you cannot get to net zero without nuclear” and that a “fundamental driver of the uranium space at the moment is the small modular reactors.”

Jon Bey points out that Canada is moving forward with plans for small modular reactors in several provinces, including Saskatchewan. “Isn’t it amazing the place where uranium is being mined is actually going to be powered by nuclear?”

The panel discusses how the Sprott Physical Uranium Trust has had an impact on the uranium market. Energy Fuels’ Curtis Moore observes that the Sprott fund “basically swept up a whole bunch of excess inventories that were floating around the market, being traded around and keeping the price depressed,” and has resulted now in “a nice uplift in the price.”

The drive to secure a domestic supply of uranium is also discussed, as well as the concerns about “Russia controlling about two-thirds of the world’s uranium resources.” Tom Drivas says that with current geopolitical uncertainties “even eastern European countries are looking to uranium outside of Russia.”

Standard Uranium is a mineral resource exploration company based in Vancouver, British Columbia. Since its establishment, Standard Uranium has focused on the identification and development of prospective exploration stage uranium projects in the Athabasca Basin in Saskatchewan, Canada.

Standard Uranium’s Davidson River Project, in the southwest part of the Athabasca Basin, Saskatchewan, is comprised of 21 mineral claims over 25,886 hectares. Davidson River is highly prospective for basement hosted uranium deposits yet remains relatively untested by drilling despite its location along trend from recent high-grade uranium discoveries.

U3O8 Corp. is focused on the development of the Berlin Deposit in Colombia. Apart from uranium for clean, nuclear energy, the Berlin Deposit contains battery commodities; nickel, phosphate and vanadium. Phosphate is a key component of lithium-ion ferro-phosphate (“LFP”) batteries that are being used by BYD, Tesla and a growing list of electric vehicle manufacturers. Nickel is a component of various lithium-ion batteries, while vanadium is the element used in vanadium redox flow batteries. Neodymium, one of the rare earth elements contained within the Berlin Deposit, is a key component of powerful magnets that are used to increase the efficiency of electric motors and in generators in wind turbines.

The Company’s mineral resource estimate for the Berlin Deposit was made in accordance with National Instrument 43-101. The preliminary economic assessment (“PEA”) on the Berlin Deposit showed positive economics and highlighted areas in which both operating, and capital costs could be reduced to enhance the economics of the deposit. Extensive metallurgical test work showed that revenue streams would be dominated by uranium, phosphate, nickel, vanadium and rare earth elements, of which only two were considered in the economic assessment.

A PEA is preliminary in nature, it includes inferred mineral resources that are considered too speculative geologically to have the economic considerations applied to them that would enable them to be categorized as mineral reserves, and there is no certainty that the preliminary economic assessment will be realized.